Christmas parades kick off the holiday season in North Texas

Santa Claus is coming to a town near you.

Santa Claus is definitely coming to town this holiday season as the star attraction of parades across North Texas. Those include the return of the Dallas Holiday Parade and Fort Worth’s Parade of Lights, two of the biggest events that were either canceled or scaled back last year for coronavirus safety reasons. You can find detailed route information, road closures, parking tips and more on event websites.

Downtown Cowtown will sparkle for the 39th edition of the lighted parade. There’ll be 100-plus illuminated floats, marching bands, equestrian units, costumed characters, horse-drawn carriages and antique cars. Santa and Mrs. Claus will wave to the crowds from their LED-lit grand finale float. Fort Worth’s Opal Lee, who’s called the “grandmother of Juneteenth,” is this year’s grand marshal. She and her family will ride a float in the parade, and 1,000 copies of her Juneteenth children’s book will be given away at 1 p.m. in General Worth Square. Watch the parade for free, or reserve bleacher seats along the route. Organizers suggest getting to downtown early before the streets become too congested. The parade steps off at Throckmorton and Weatherford streets, moves south on Commerce Street, winding through downtown before ending at Throckmorton and Third streets.

Lighted floats will roll through historic downtown for an evening parade that takes off from Getzendaner Park and travels to the Ellis County Courthouse. Family fun activities take place downtown starting at 6 p.m. including the official tree lighting on the courthouse lawn following the parade.. 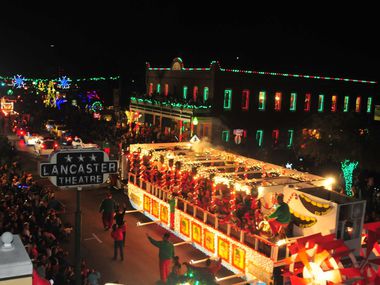 Lighted floats, marching bands and other parade entries will shine brightly as they roll along historic Main Street for the city’s 42nd holiday parade. The route is along Main Street from Hanover Drive to Northwest Highway. Arrive early to view the choreographed light show outside City Hall (200 S. Main St.) starting at dusk.

Santa rolls into Big D bringing cheer to thousands who will line Commerce Street. Highlights of the parade include costumed characters, marching bands, dance and drill teams, elaborate floats and larger-than-life balloons. Admission to the parade is free; reserved bleacher seating is available to purchase. The parade steps off at 10 a.m. at Commerce and Houston streets and continues east on Commerce, making performance stops along the route. Check the website for updated route details.

The parade is part of the Holiday Stroll festivities in Old Town Lewisville, stepping off at noon from Cowan Avenue and Main Street. The route goes east on Main, south on Mill Street and ends at Purnell Street. (See Page 25 for more on Holiday Stroll activities.)

Watch from the shoreline as watercraft decked out in sparkling holiday lights float across Grapevine Lake. The twinkling flotilla begins at Twin Coves Marina and rounds the lake, stopping at each marina to pick up more boats. The floating parade will be visible from many points along the shoreline, including Oak Grove Park (2520 Oak Grove Loop South).

“Rudolph, Light the Way” is the theme for this year’s lighted parade that winds through Irving’s Heritage District. Expect sleighs, reindeer and elves, with Santa taking a bow at the parade’s conclusion. The parade is followed by holiday cheer at Heritage Park and the official tree lighting in front of City Hall.

THE COLONY PARADE OF LIGHTS

A lighted community parade kicks off the holiday season in The Colony. The parade starts at Peters Colony Elementary School and ends at the Five Star Complex. The fun continues with a holiday carnival in Perryman Park (4930 S. Colony Blvd.) and the Christmas Spectacular light show at the Central Fire Station.

The lighted parade travels on Ballard St. in downtown Wylie to Old City Park, where Santa will help illuminate the Christmas tree.

Community groups and businesses will participate in a Christmas in Toyland-themed march that begins at North Cedar Drive and St. Mary’s Drive, proceeds south to Main Street, and ends at the traffic circle at St. Mary’s Drive.

The parade leaves Beverly D. Humphrey Tiger Stadium at 1 p.m. and heads south on Dallas Avenue to Historic Town Square (Dallas Avenue at Main Street) for a festival with food, games and photos with Santa.

Thousands are expected for a holiday kickoff in downtown Arlington. The event includes Reindeer Games for children, live entertainment, selfies with Santa, the lighted parade and the Christmas tree illumination in Founders Plaza. The route has changed slightly this year, with the parade stepping off at 6 p.m. from West South Street and Lampe Street, then winding through downtown past the Levitt Pavilion, City Hall and the Arlington Public Library before arriving at Abram and Cooper streets.

“Rockin’ Around the Christmas Tree” is the theme of this year’s parade through historic downtown McKinney. Visitors are encouraged to use the free trolley service which will run from 5 until 9 p.m. from First Baptist Church, 1615 W. Louisiana St. to Dr. Glenn Mitchell Memorial Park (one block west of the square).

Norma Cavazos. I've been living, working and playing in Dallas forever, but things are always changing. There's always a new (fill in the blank) to try and I want to! I like old school Tex-Mex, Cosmopolitans, the State Fair and the view of downtown from White Rock Lake.