A most enjoyable Dallas Symphony concert

Well, that was an enjoyable hour and a half.

Determined to maintain live music even amid the coronavirus pandemic, the Dallas Symphony Orchestra offered a particularly appealing program Thursday night. With a maximum of 40 musicians socially distanced on the extended Meyerson Symphony Center stage, string players masked throughout, an audience restricted to 100 subscribers was treated to performances as refreshing as the selection of music.

The concert certainly displayed the authority and fine musicianship of principal guest conductor Gemma New, in her second season with the orchestra. Coordination even in the tricky rhythms of Alberto Ginastera’s 1965 Harp Concerto was impressively taut; both George Walker’s Lyric for Strings and Mozart’s Prague Symphony were elegantly shaped.

Arranged from the slow movement of Walker’s 1946 String Quartet, the Lyric is a memorial to the American composer’s deceased grandmother. Initial solemnity yields to more hopeful music — or at least happier memories. In the Meyerson’s lush acoustics, with New cultivating appropriately soft edges, 23 strings supplied amazing warmth, but also delicacy.

Performed with normal numbers of winds and brasses, but reduced string complements, both the Mozart and the Ginastera had occasional balance issues. Given the deep spacings onstage, with winds and brasses separated by plastic panels, balances couldn’t have been easy to judge.

The challenges are built into the Ginastera, pitting the harp against an orchestration including trumpets, horns, timpani and tom-toms. Balances were generally well-managed except for climactic moments when brasses and percussion could have backed off a bit to keep more in scale.

The concerto is a real showpiece for harp, with snappy interplays with the orchestra and strummings alternately bold and dreamy, even drummings on the body of the instrument. Multicolored ruminations in the slow movement and ensuing cadenza preface the finale’s explosion of hip-shifting rhythms echoing Argentine folk music.

DSO principal harpist Emily Levin played with the greatest panache, but also great poetry in the introspective music. New and the orchestra matched her for pizzazz and atmosphere.

New made the Mozart a marvel of mobility and spring, phrases tapered just so, with natural catch-breaths between them. After some exposed early scurries that found first violins not quite in high-gloss precision, and a couple of horn burbles, the playing was as polished as could be wished.

Trumpets and horns were sometimes louder than needed for what are mostly just punctuations, and occasional reinforcements. After all, the 18th-century instruments for which Mozart wrote were far gentler than ours. Even oboes — also far quieter in the 18th century — could have been more reserved here and there.

In a perfect world, call-and-answer effects between first and second violins would have been heightened by seating the latter on the opposite side of the stage, as would have been the 18th-century norm.

Repeats at 7:30 p.m. Friday and Saturday and 2:30 p.m. Sunday at Meyerson Symphony Center, 2301 Flora. Tickets are currently restricted to season subscribers. High-quality video recordings of most of this fall’s DSO classical and pops concerts will be available a few days later on the orchestra’s website, this one on Oct. 2. Free for subscribers, the videos are $10 to others; a season pass is $125. 214-849-4376, mydso.com. 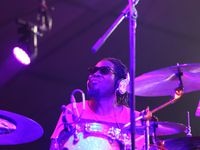 Sorry, haters: Globe Life Field is a great place to watch baseball — and a serious work of architecture

In a West Dallas gallery, artist Tamara Johnson harnesses the power of goo