All 4 hobbits are coming to downtown Dallas this month

The ‘Lord of the Rings’ stars will join plenty of other celebrities as part of Fan Expo Dallas, the annual three-day convention.

In a notable reunion, all four hobbits from Lord of the Rings will be in attendance. Stars Elijah Wood, Sean Astin (who also starred in The Goonies), Dominic Monaghan, and Billy Boyd are all onboard this year to reunite the four hobbits, Frodo, Samwise, Merry and Pippin.

There’s also another rendezvous planned from one of the most successful TV shows of all time, The Office. Stanley (Leslie David Baker), Kevin (Brian Baumgartner) and Oscar (Oscar Nuñez) are all coming to the convention as well.

Jon Bernthal and Chandler Riggs from The Walking Dead will making appearances, too, as well as Stephen Amell, Ben Lewis, and Katherine McNamara from the action-adventure TV series Arrow. There’s also Teri Hatcher and Dean Cain from the critically acclaimed ’90s TV show Lois & Clark: The New Adventures of Superman and Brandon Routh and Caity Lotz from another superhero series, Legends of Tomorrow.

Reunions rule Dallas Fan Expo this year, but there are plenty of other celebrity guests making appearances, including professional wrestler turned film star Dave Bautista from the Guardians of the Galaxy films and Brendan Fraser from The Mummy action horror film franchise.

From Monty Python and Harry Potter, John Cleese is returning to Dallas again after recently collecting a VideoFest award at Texas Theatre. There is also George Takei, who played Sulu on Star Trek before becoming a bestselling author and gathering millions of followers on Twitter; actress Christina Ricci from The Addams Family films; Giancarlo Esposito (Breaking Bad, The Mandalorian); and Levar Burton from Star Trek: The Next Generation.

Last but not least, comedian “Weird Al” Yankovic, known for his parodies of hit songs and UHF, a cult comedy from 1989, will be present. Mena Massoud, who starred in 2019’s live-action version of Aladdin, and John Leguizamo (John Wick) will also be available for autographs and photos.

Need a quick getaway from D-FW? Hotel Lucy in Granbury is fun and stylish 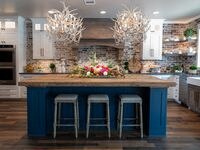 Kathy Lovas’ Honda SUV was stolen. Then, she made an art show about it

Can art help fight the coronavirus?

After 5-hour waits and cars running out of gas, State Fair vows to speed up its drive-through