Major factory announcements and 360,000 new workers in the past decade have airlines adding flights in and out of Austin-Bergstrom International Airport.

A war is heating up between American Airlines and Southwest Airlines for dominance at Texas’ fastest-growing airport, Austin-Bergstrom International — and the two carriers aren’t waiting for the pandemic to subside.

No airport of its size in the country has bounced back from COVID-19 the way Austin-Bergstrom has, buoyed by a growing population in Central Texas and an influx of new companies such as Tesla, Oracle and Samsung creating thousands of jobs in the region.

At an airport long dominated by Dallas-based Southwest, Fort Worth-based American has added 24 nonstop routes to Austin since November 2019, four times as many as it had before the pandemic. Two years ago, American only flew from Austin to its eight major hubs at airports including DFW International, Los Angeles, Chicago and Miami.

Now the airport is embarking on a multibillion-dollar expansion plan to keep all those flights and add more, including a new concourse connected to the old one by a tunnel, 10 new gates and two new taxiways.

American is scheduled to fly more than 2,000 flights out of Austin in November, double what it flew before the pandemic, while Southwest has more than 2,300 flights scheduled for the month, its busiest ever at Austin, according to Diio by Cirium. With the recent push, American is flying daily to Nashville, El Paso, Indianapolis, Jacksonville, Fla., and even international destinations such as Cancun.

And on Nov. 16, American announced it would build a 15,000-square-foot lounge at Austin-Bergstrom to replace an older, smaller one that had reached capacity. Construction of the lounge, which will seat 250 travelers, will begin next year.

It comes a year after Delta Air Lines opened a 9,000-square-foot lounge at the Austin airport that includes an outdoor patio and nods to the area’s music scene.

For American, it’s the most aggressive growth the company has pursued since it merged with US Airways in 2013, said Brian Znotins, American’s vice president of network and schedule planning. It’s also a unique strategy for American, which usually skips direct flights between airports in favor of connections to its primary hubs.

“We are not really worried about a classification,” Znotins said. “It’s been our top connecting point from DFW for a number of years. It’s an important spoke and we found that increasingly as the city continues to grow, we need to protect Austin’s position in the DFW hub and we need to add nonstop flights to Austin.”

American now flies from Austin to 21 of the top 25 markets in the U.S., he said.

It’s no surprise Austin is getting so much attention after a decade of booming growth. Already home to the Texas Capitol and the University of Texas at Austin, the area has recently attracted billionaires and Fortune 500 companies for major projects. That includes a $1 billion investment from Tesla for its “Gigafactory,” where it will make its electric trucks and other vehicles. And Samsung last week announced plans to build a $17 billion semiconductor plant in Taylor, about 40 minutes northeast of the airport.

The area’s population has grown 34% in the past decade, according to the Census Bureau, more than any other metropolitan area with more than 1 million people.

Coming out of the COVID-19 pandemic, Austin-Bergstrom has jumped in front of Texas’ other non-hub airports for the most daily flights, flying past major Southwest focal points at Dallas Love and Houston Hobby.

Southwest has long dominated Austin-Bergstrom International Airport, historically carrying about twice as many passengers as any other carrier. But connections from Austin have often been limited to the other major hubs in the region, such as American’s base at DFW International and United Airlines’ hub at Houston Intercontinental Airport.

Austin-Bergstrom airport director Jacqueline Yaft said her main goal in recent years has simply been to get local residents to fly from there.

“A lot of people would drive to Dallas all the time to catch a flight and the same thing in Houston,” Yaft said. “Now with all the growth, Austin-Bergstrom has become the airport of choice.”

Yaft said there is already high interest for the upcoming gates. The project was slowed slightly by the pandemic, she said, but the airport moved ahead with environmental studies and other background work. The airport and the city, which owns the airport, have not announced an anticipated completion date for the expansion.

While American and Southwest have made major moves to grow in Austin, Yaft said Austin-Bergstrom still has the advantage of being an airport with a strong flight schedule from all the major airlines. Delta and United each fly more than 20 flights a day out of Austin, and smaller carriers such as Alaska, JetBlue and even low-cost Spirit, Frontier and Allegiant have expanded there in recent months.

Dallas’ David Looney grew up in Austin and still flies back a few times a year to visit his mother and friends. He said Austin’s airport has the feel and accessibility of a small airport, even though it’s growing and connecting to more places.

“My dad was a business traveler when I was growing up, and back then, it was pretty much direct to DFW before you could fly anywhere else,” Looney said.

Austin-Bergstrom also has the advantage of being one of the newer airports in the country, opened in 1999, giving it a larger and airier interior than other airports its size, such as ones in St. Louis and Portland, Ore.

The only drawback, Looney said, is the airport’s location on the southeastern corner of Austin, difficult to get to by the major freeways even though a toll road to the airport recently opened.

But Austin’s rapid population and employment growth, adding more than 360,000 jobs in the past decade, has meant that people need the nonstop flights Austin now offers, particularly tech workers relocating from California and elsewhere, said Matthew Geske, the Austin Chamber of Commerce’s vice president of regional infrastructure and mobility.

“In order to get these people to relocate and move out here, you need nonstop service, and that means flights to places like Boston, Los Angeles, Seattle, Portland and New York,” Geske said. “The less time they need to spend in an airplane, the better.” 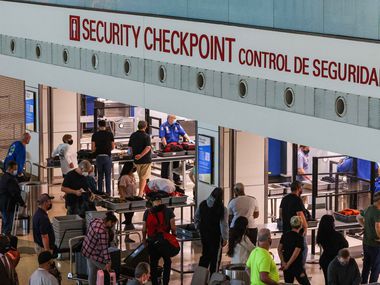 Airlines are gearing up for the busiest travel period in almost two years when as many as 316,000 travelers will go in, through and out of North Texas’ two major commercial airports on their way to visit family and celebrate Thanksgiving. DFW International Airport alone expects 2.3 million passengers during the Thanksgiving period from Nov. 18 to Nov. 29, about 95% as many passengers as they saw in 2019 before the COVID-19 pandemic.
By Kyle Arnold