When it’s ready to build its $1.29 billion plant, the company may look first at places where it has a manufacturing presence, workers and suppliers nearby.

The competition will be fierce for Toyota’s new $1.29 billion factory to produce batteries for hybrid and electric vehicles. It would create 1,750 jobs and start operating in 2025. The states where Toyota already makes vehicles are already seen as early front runners. They are:

Texas: Toyota’s North American headquarters is in Plano, and it makes Tundra pickups at a manufacturing plant in San Antonio. It has 7,300 workers in the state.

Kentucky: Toyota’s plant in Georgetown, Ken., is the company’s largest vehicle manufacturing plant in the world, producing up to 550,000 vehicles and 600,000 engines per year. It produces the Camry, Camry Hybrid, Avalon, Avalon Hybrid, RAV4 Hybrid, Lexus ES 300h and Lexus ES 350, as well as four-cylinder and V-6 engines. The plant has also received the most investment, totaling $8.2 billion, according to Toyota. The company has 9,200 workers in Kentucky.

Indiana: Toyota’s plant in Princeton, Ind., has 7,222 workers and produces 400,000 vehicles each year, including the Sequoia and Highlander/Highlander Hybrid SUVs and the Sienna minivan.

Alabama: The company’s engine plant in Huntsville, Ala., employs 1,150 people who assemble V6 and V8 engines for Tacoma and Tundra trucks and Sequoia full-size SUVs. It also makes 4-cylinder engines for Camry, RAV4, Sienna and Highlander.

Corporate site selection expert John Boyd Jr. described Toyota’s just-announced battery plant as a potential “trophy” and “economic engine” for the state that receives it. And he sees Texas at the top of that list. 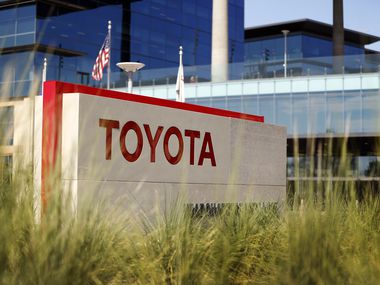 Texas one of several likely locations for Toyota’s next $1.29 billion U.S. battery plant