As COVID’s economic pain fades, is the worst over for nonprofit hospitals?

They’re racking up profits and cash in North Texas, and S&P said the industry is stable again. But patient volumes and health care jobs are still lagging.

Hospitals appear to have weathered the worst of the pandemic’s economic effects. They’ve shifted from losses to profits and from revenue declines to gains, and many are even piling up cash, lifted by rising investment markets and millions in federal relief funds.

S&P Global Ratings recently revised its view of the not-for-profit health sector from negative to stable, which one analyst called “a big move.” It reverses S&P’s negative assessment first announced in March 2020, when the coronavirus crisis took hold, and reiterated in January, when COVID-19 cases surged again.

“The acute phase of the pandemic has eased,” S&P wrote in a report released June 23.

Financial risks have lessened, S&P said, and the credit-rating agency doesn’t expect downgrades to surpass upgrades, at least not in large numbers.

“From our perspective, it’s a big move that messages that we don’t think there’s a disproportionate amount of negative credit pressure in the sector anymore,” said Patrick Zagar, an S&P credit analyst in Dallas.

Health care jobs have not returned to pre-pandemic levels, not in Texas or Dallas-Fort Worth. But the financial recovery has been striking, including at Texas Health Resources, the Arlington-based company with roughly 25% of the regional hospital market. The company’s hospitals include Texas Health Harris Methodist Hospital Fort Worth and Texas Health Presbyterian Hospital Dallas.

After the pandemic emerged, THR’s quarterly revenue from patient services dropped over 21% in the quarter ended June 30, 2020. Every quarter since, patient services revenue has topped pre-pandemic levels.

In the three months ended March, THR reported an operating profit of $16.7 million, reversing a quarterly loss of $13.8 million last year. Company officials pointed to returning patients as the primary factor in the financial improvement.

THR ended March with $7.65 billion in available cash, up from $5.32 billion a year earlier. A resurgence in investment markets helped, and THR also received $284 million in federal relief funds.

Texas’ nonprofit hospital systems have performed better than most, and the state’s strong operators are emerging from the pandemic even stronger, Zagar said. In a May 26 report on the Texas nonprofit sector, S&P said companies in the state benefited from steady tax revenue, a decline in uncompensated care and strong earnings at health insurance units.

Federal aid, S&P said, has been “a critical supporting factor.”

Hospitals often measure cash by the number of days of operations they could fund. By that metric, THR had 601 days of cash at the end of March, 31% more than a year ago. Finances were so solid, the company said, that it maintained its “full-strength” workforce during the pandemic and passed on some provisions in the federal relief package, such as advance payments from Medicare.

Baylor Scott & White Health, another top provider in North Texas, reported a 61% gain in days of cash on hand. Methodist Health System had a 19% increase.

“Hospitals in North Texas have done a good job, and we’re fortunate they were very well managed during the pandemic,” said Stephen Love, CEO of the Dallas-Fort Worth Hospital Council, an advocate for the industry. “Things are definitely improving, and as we get more people vaccinated, hopefully we really will be coming out of this.”

D-FW hospitals had about 375 people with COVID-19, he said on Friday. That’s down from 4,250 in early January, but recent numbers are “inching back up,” he said.

One reason is the increase in the more transmissible Delta variant. Another is a general reluctance to get the vaccine, which leaves those residents highly vulnerable.

“I don’t like to preach to people so all I can say is please consider getting a vaccination and try to make an informed decision,” Love said.

In Texas, the industry has additional concerns, including the status of a valuable Medicaid waiver and Medicaid expansion. They require action by the federal government or Texas Legislature, and politics has a history of intervening.

“Those two big things can have a tremendous financial impact,” Love said. He pointed out that a neighboring red state, Oklahoma, expanded Medicaid last week after a 2020 ballot initiative.

Despite those issues, local financial results have been strong. For the nine months ended in March, patient care revenue at Baylor Scott & White rose 4.7% and operating income more than doubled to over $1.1 billion.

At Methodist, operating income for the March 31 quarter was $51 million, up from $22 million for the same period last year.

Some of the strongest numbers came from Parkland Health & Hospital System, which operates the only public hospital in Dallas County and cares for many uninsured patients. Parkland generally doesn’t have much income, but it earned over $308 million in fiscal 2020, the year ended in September.

In 2019, Parkland had an additional $60 million in revenue from government programs. Last year, Parkland took in an extra $181 million.

Some measures from local hospital companies continue to lag. At the end of 2020, Texas Health Resources was still far below pre-pandemic volumes in ER visits, doctor visits and total surgeries.

Hospital discharges rose in the March quarter, along with occupancy rates and total births. But patient volumes remained below year-ago levels in outpatient visits, doctor visits, surgeries and trips to the ER.

S&P cited several positive developments, including the Supreme Court’s rejection of another Texas challenge to the Affordable Care Act.

The overall economic outlook has also improved, S&P wrote, “and as unemployment rates continue to decline, additional volume may return.”

How Baylor Scott & White Health moved up to the ‘big leagues’ 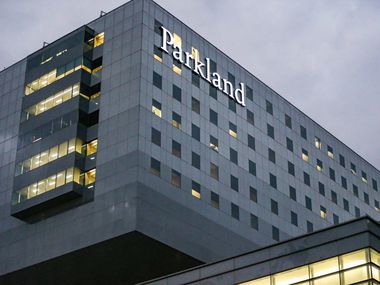 V-shaped recoveries can happen: How Baylor Scott & White restored profits during the pandemic