Grocers and their suppliers have worked fast to replenish shelves after last week’s snowstorm and expect to have North Texas stores back to normal by this weekend.

The weather’s impact on grocery shelves isn’t the same as last year’s COVID-19-driven shortages that started with toilet paper and moved throughout the store as pantry loading depleted supplies nationwide.

While the Texas storm was unusually harsh and left retailers with no power and water at hundreds of stores, recovering from harsh weather is different. That’s not to say retailers, like consumers, aren’t reminded of the early months of the pandemic’s impact on shopping for essentials.

“What we learned from COVID is that transparency, safety of our employees and customers, and speed are what matters,” said Adam Wampler, Kroger’s division president. “This is a very different event than COVID. Within 72 hours, we’re back in business.”

All 109 Kroger stores in North and East Texas and into Louisiana are open, and 40 of those had broken pipes that have been fixed. Amazon has reopened its delivery stations, and the online retailer said its drivers are catching up with orders that were put on hold last week. Walmart said Monday that all of its stores have reopened after having more than 500 locations closed a week ago. Tom Thumb and Albertsons said all 99 of its North Texas stores are open with regular hours.

Shortages of milk, eggs and bottled water have been common in recent days.

Deliveries since Thursday and into the weekend as the snow melted have been focused on getting the basic milk and bread out, Wampler said. Kroger has a bottled water plant in Irving that was working to fill demand as cities were put under boil-water notices.

Suppliers facing the same power outages and bad road conditions as the rest of us shifted gears to make more key items such as whole and 2% milk in gallon sizes only and white and wheat sandwich bread.

Refrigerated coffee creamers, other specialty dairy items and full bread walls will be back in stores by the end of the week, Wampler said.

“When the sun came out and the snow melted, the wheels on the trucks started rolling,” said Christy Lara, spokeswoman for Albertsons and Tom Thumb. “Every one of our stores has had multiple shipments in the last three days.”

By the end of this week, Tom Thumb and Albertsons stores will look normal again, Lara said. Albertsons and Tom Thumb were able to get supplies from their company’s distribution centers in Phoenix and Denver.

“Last March, when we had a huge run on products, the entire nation was facing the same issues,” she said. “We do not foresee any long-running outages of product.”

Some items on grocery store shelves, such as salty snacks, beer, wine and bread, are delivered directly by manufacturers.

Retailers have been letting suppliers bring shipments whenever their trucks can get there instead of following normal delivery schedules. 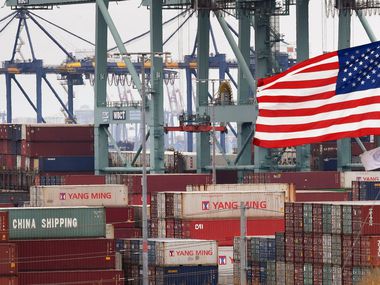 Toilet paper is back on shelves, but these 6 things are still tough to find nearly a year into the pandemic

The reasons your sofa is still floating on the ocean in a shipping container may have started with COVID-19 but the dominoes keep falling. Mac ‘n cheese saved the day for one Plano business.
By Maria Halkias, Dom DiFurio and Kyle Arnold

There were no beer deliveries Monday through Thursday of last week, but since they knew a snowstorm was coming, many retailers bumped up their orders ahead of the storm, said Jason Bush, general manager of the Ben E. Keith’s Dallas distribution center.

Ben E. Keith, which distributes Bud Light, White Claw Seltzer, Icelandic water and 100 other brands throughout Texas, started making deliveries again on Friday and expects to have all its North Texas customers fully stocked before the weekend, Bush said.

Frito-Lay had its trucks back on the road as soon as it was safe, the company said in an email. To cover Dallas-Fort Worth, the salty snacks maker has 300 sales routes that make up its direct-to-store delivery system. Each route covers multiple stores, including convenience stores.

The Plano-based company said it usually sees an increase in demand and “stock-up behavior” around inclement weather.

Customers seem to have been more worried about out-of-stock items this time, Lara said. “We think that’s because of the COVID experience we all just went through.”

Early stockpiling started at about this time last year, in late February, and Lara said he didn’t have to look up the day the pandemic was declared: March 10.

Texas manufacturing on upswing, despite worries over oil prices, politics and a winter freeze 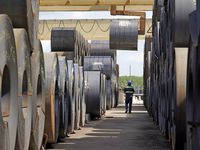 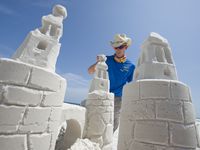 Rapper Yella Beezy had 5 guns in his vehicle when Dallas police arrested him, affidavit says