A coalition of franchisees are fed up with what they call ‘one-sided’ franchise agreements.

At the helm of the push for an investigation is an association of 7-Eleven’s own franchisees. The National Coalition of Associations of 7-Eleven Franchisees represents 40 associations numbering in the hundreds across 30 states.

The petition alleges that franchise agreements have evolved to emphasize the rights of the franchisors to the detriment of franchisees, allowing large companies to act in a way that “disregards the legal and financial interests of the franchisee.” Even Congress is paying attention to the recent surge of unsolicited text messages.
By Dom DiFurio

The petition outlines more than 100 points of data on each company the commission should collect. Some of the data targeted include franchising companies’ breakdown of ownership, fees charged to franchisees, expenses like labor costs and even the profitability of customer loyalty programs.

In a statement, 7-Eleven said that it will continue to work with the FTC on any requests and that the company “remains committed to supporting franchisees.”

“This year, 7-Eleven Franchisees are experiencing the strongest increases in sales, margin and gross profit performance in over four years. Less than 5% of stores turned over in 2020, which is consistent with our standard turnover rate for the past 10 years. Since the start of the COVID-19 pandemic, we have provided more than $185 million in incremental support for franchisees as they continue to serve their customers and communities,” the company said.

Dickey’s said in a statement that it also plans to cooperate with any FTC reviews.

“Since we began franchising our brand in 1994, the Dickey family — along with our entire leadership and support team — has been dedicated to creating opportunities for our owner-operators to succeed while maintaining the highest standards for our guests,” the company said.

Dickey’s added that over the past two years, the company has waived franchise fees, created new revenue streams, built new technologies and training programs, and abated royalties for 14 weeks.

The petitioners said they hope that a probe of the companies’ franchising practices will lead to greater regulation in the franchise industry.

“This petition provides the opportunity for the FTC to take a proactive role in assessing the franchise industry,” legal consultant Keith Miller of Franchisee Advocacy Consulting, who also collaborated on the petition, said in a release.

“We are requesting the FTC look broadly at the imbalance of power in our industry today.”

The petition comes a week after FTC chairwoman Lina Khan sent a memo to the commission’s staff outlining its policy priorities under the Biden administration. In the memo, she said the commission would focus on business contract practices that “constitute unfair methods of competition or unfair or deceptive practices,” singling out franchisees specifically as a vulnerable party. 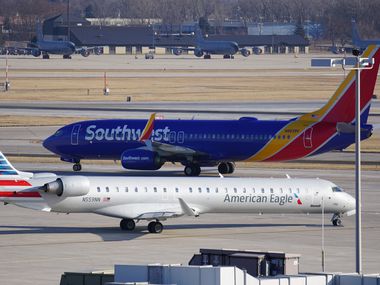 The Allied Pilots Association that represents 15,000 pilots at Fort Worth-based American Airlines sent the White House and Congressional leaders a letter Friday that warned that carriers may have “mass terminations of unvaccinated pilots” if the White House goes through with announced plans to require COVID-19 vaccinations for federal contractors and companies with 100 or more employees. The Southwest Airlines pilots union issued a similar warning.
By Kyle Arnold

7-Eleven is one of the largest franchisors in the U.S. and has regularly experienced dust-ups with franchisees over the terms of its franchise contracts. In 2018, the chairman of NCASEF said that relations between store owners and the corporate office in Irving were “at an absolute low point in the history of 7-Eleven in the United States.”

The company came under fire from the FTC earlier this year when the commission dubbed 7-Eleven’s $21 billion deal to acquire the Speedway chain of convenience stores from Marathon a violation of antitrust law. In June, 7-Eleven and Marathon reached an agreement with the commission to divest hundreds of stores as part of a settlement.