The Plano location contains a 55,000-square-foot e-commerce fulfillment center that will begin operating next summer.

H-E-B’s new Plano store opens Wednesday at 6 a.m., six weeks after its Frisco store proved the retailer has a ready customer base in Dallas-Fort Worth.

The Plano store is similar to Frisco but passersby believe it looks bigger, sitting on an incline on the southwest corner of Preston Road and Spring Creek Parkway.

It’s not, but at 118,000 square feet it’s as big as the Frisco store, which opened Sept. 21 and continues to have lines of shoppers waiting to get in on weekends.

The Plano H-E-B includes the retailer’s True Texas BBQ restaurant on one side of the store and a full-service pharmacy on the other, both with drive-throughs. The store will fill curbside and home delivery orders, and there’s a fuel station with a car wash. Stores under construction in McKinney and Allen are expected to open next summer.

The Plano H-E-B is only 5 miles from the company’s Central Market store in Plano. That store has been open 20 years, and H-E-B will be closely watching how the two locations settle. Central Market has a a week of big events planned at the store on Coit Road, including appearances by celebrity chefs.

And while H-E-B expands to more parts of Dallas-Fort Worth, a facility next to the Plano store will help all of its stores make online grocery deliveries.

The e-commerce fulfillment facility will begin operating by mid-2023 and is designed to fill orders within a 5- to 7-mile radius of each of H-E-B’s stores.

“We don’t want people to think this facility can deliver to all cities,” said Stephen Butt, an H-E-B board member and president of the company’s Dallas-based Central Market division. “It may support deliveries to McKinney and Allen next year when those stores open. Think of it more of a supporting function than expanding the service area.”

Butt said the reach of the fulfillment facility will “depend on how the business unfolds from the Plano and Frisco stores.”

The 55,000-square-foot e-commerce fulfillment center is adjacent to the new Plano store.

The building will relieve congestion in store aisles, Butt said. “We want it to help make the in-store shopper experience better and help us reduce the carts on the floor.”

The facility will also improve product availability in stores by stocking goods that are ordered online. H-E-B just hired 750 people to operate the grocery store, and it’s actively hiring for 150 more full-time and part-time jobs at the e-commerce fulfillment center.

The Plano facility will be the chain’s sixth e-commerce fulfillment center. H-E-B opened one in Leander, north of Austin, in July that’s filling orders in the surrounding cities in Central Texas. 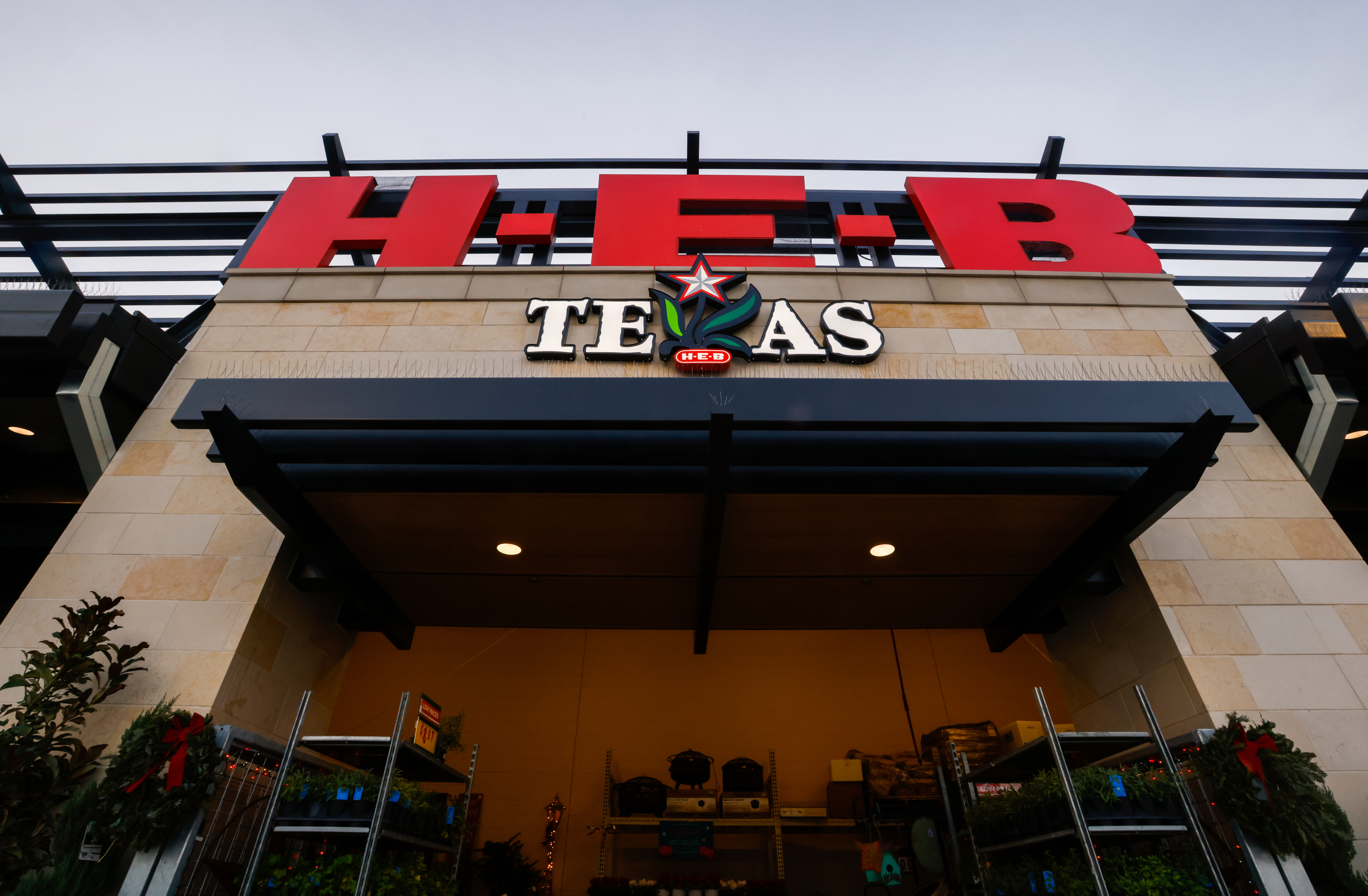 H-E-B and Costco knock off Amazon as top U.S. grocers
“Digital has staying power but is no longer as key to driving short term retailer momentum as it was from 2020 to 2021,” the Dunnhumby report said. 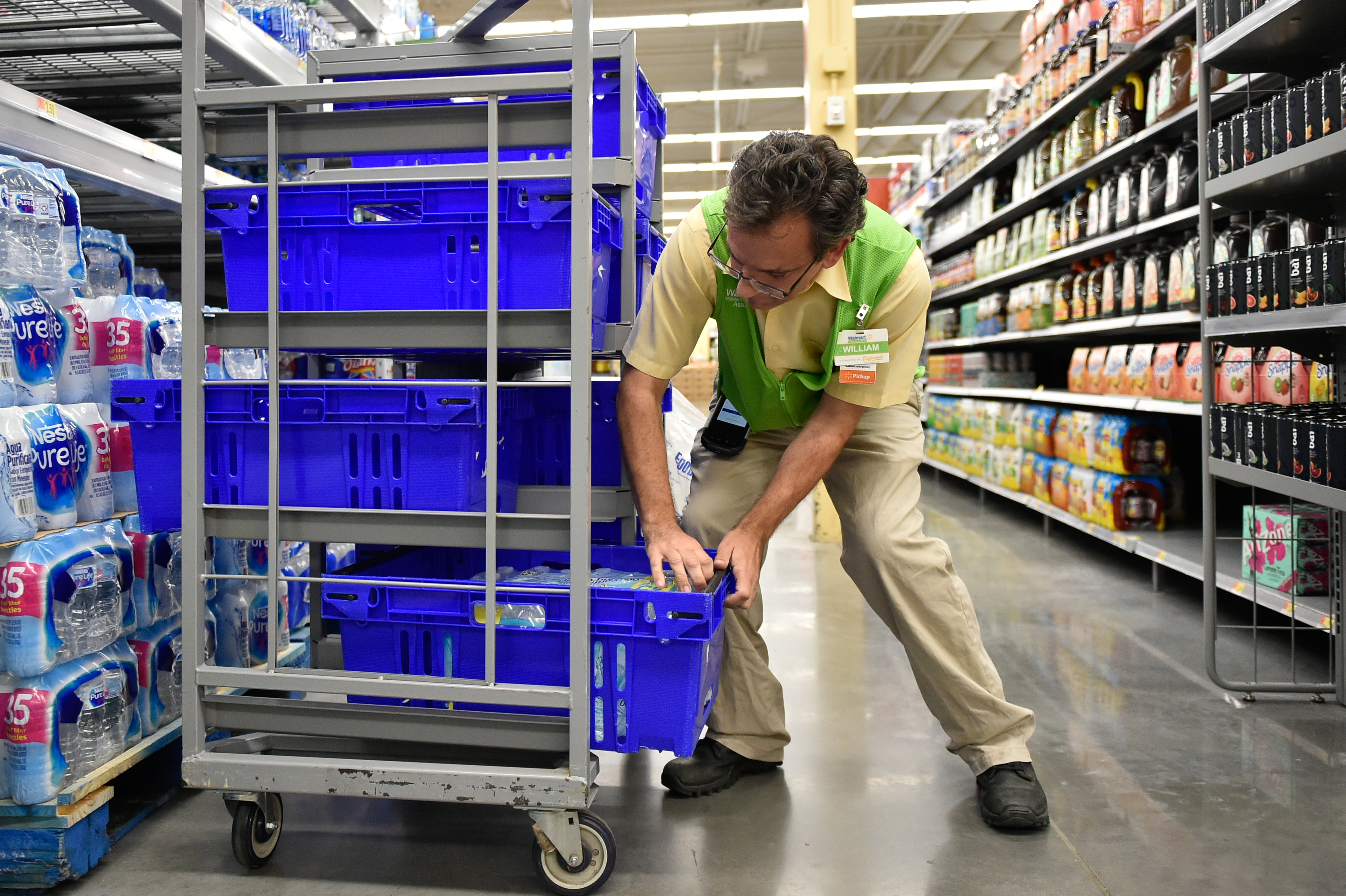 D-FW shoppers turned to their grocery apps, but time slots have filled up
The weather has caused a spike in orders. Tom Thumb, Albertsons, Walmart say they aren’t taking additional orders for tomorrow. 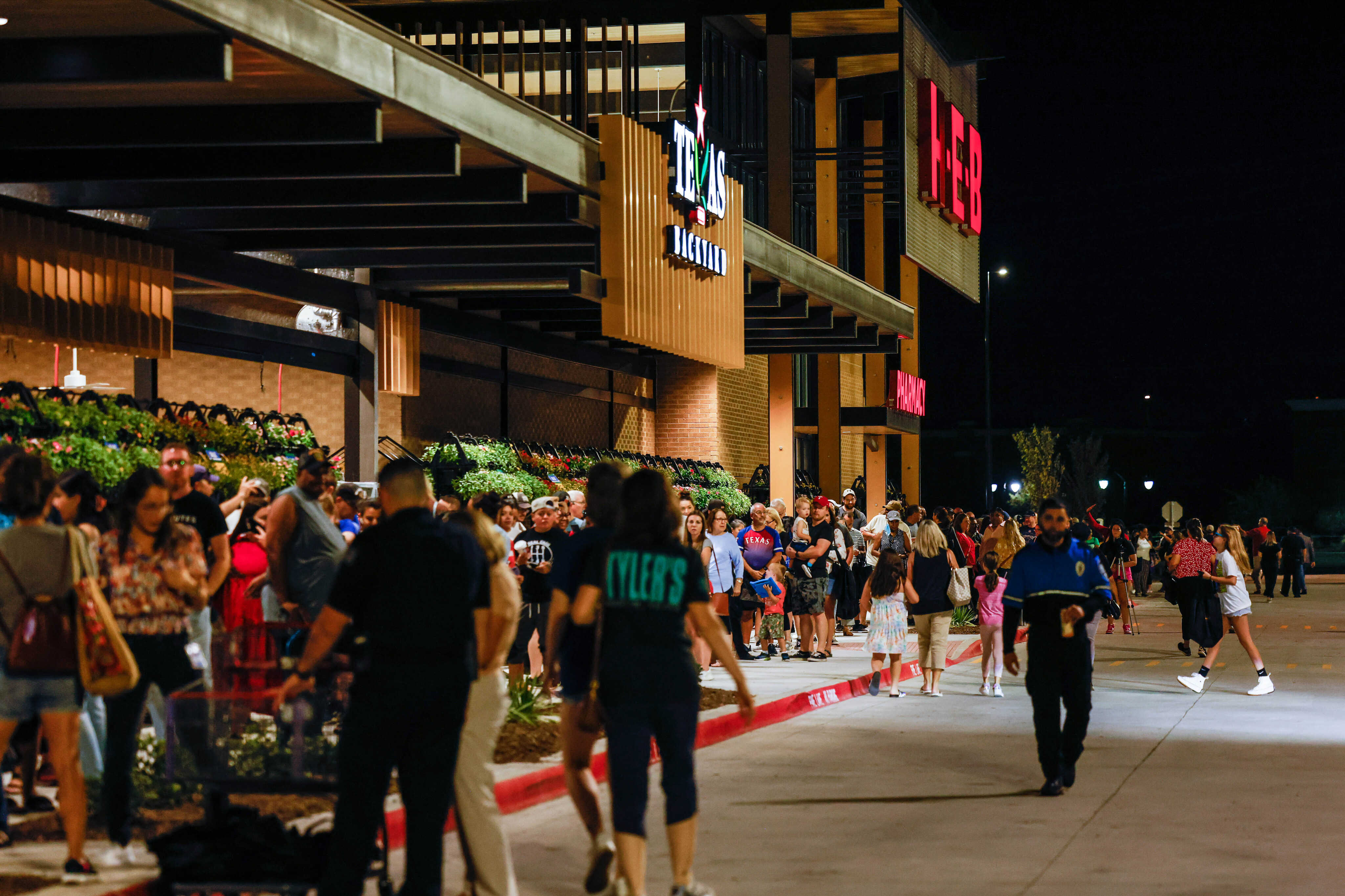 H-E-B to start building its second Frisco store as soon as June
The site in Denton County is referred to in Frisco planning documents as the Four Corners Shopping Center. 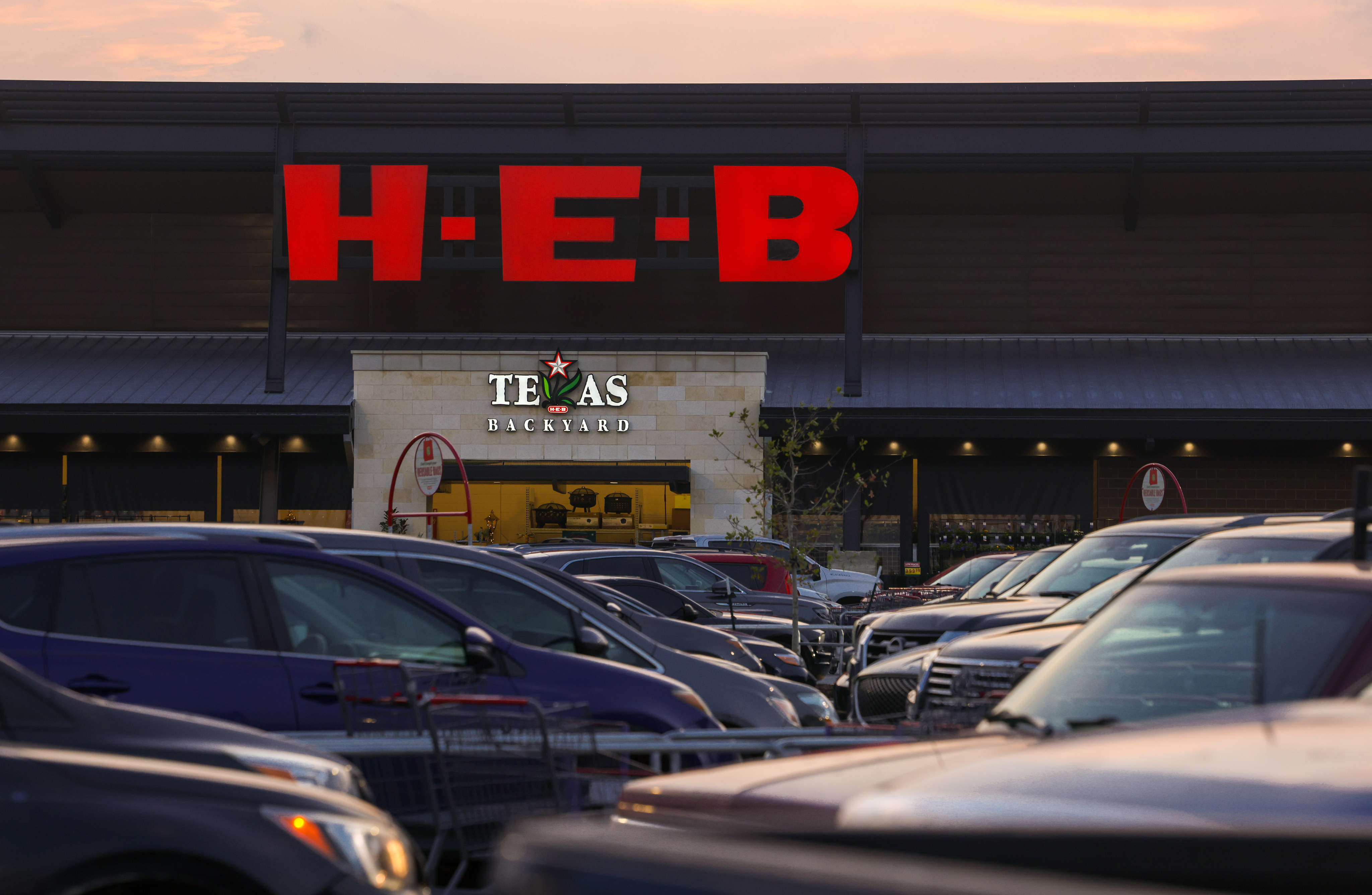 H-E-B worker starts petition over grocer’s sick policy after testing positive for COVID
The San Antonio-based company says its sickness procedures have been in place since 2020 and came after “months of research and feedback” from employees. 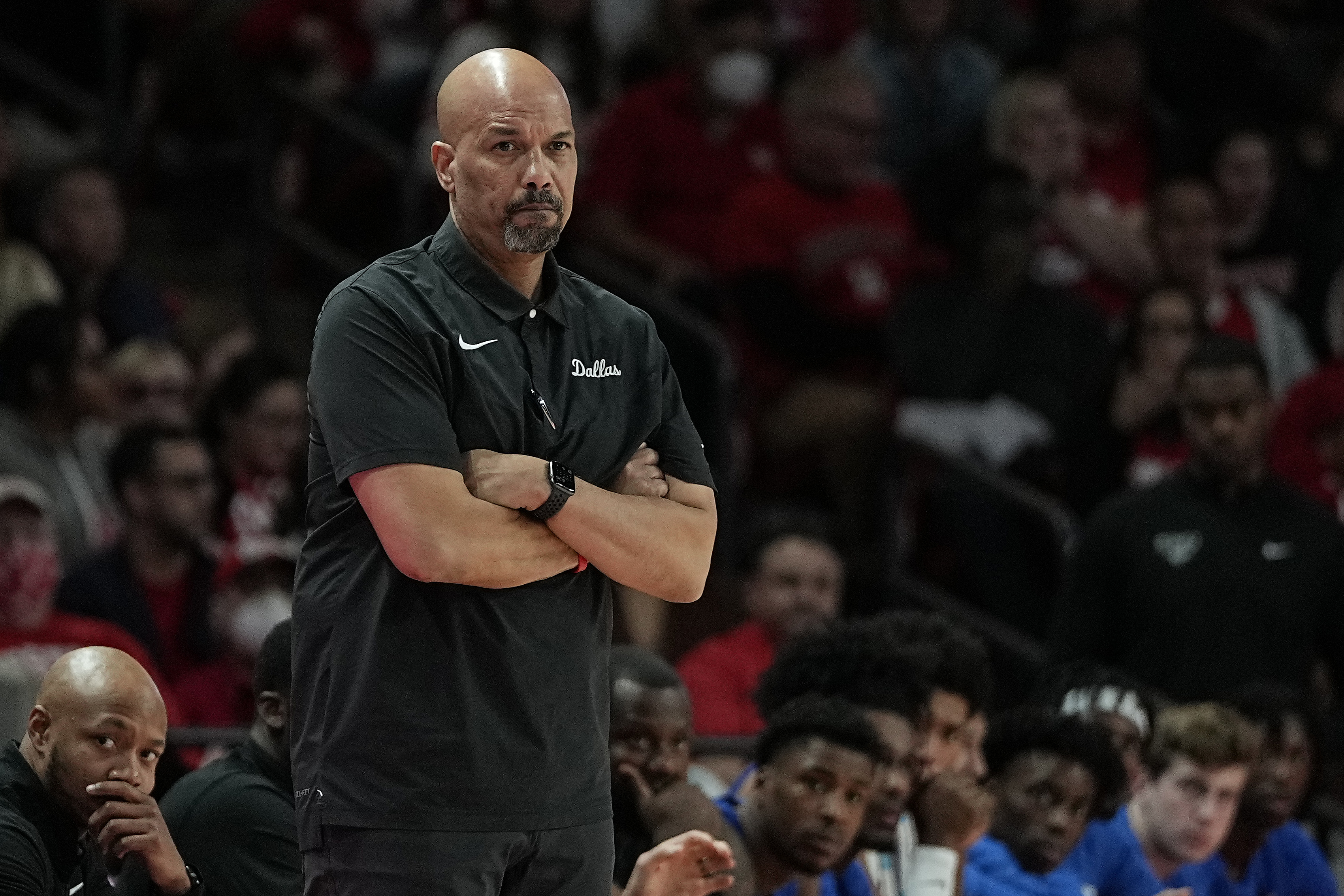 The San Antonio-based retailer purchased Austin-based on-demand delivery service Favor in 2018. The next year it consolidated Favor into a new 81,000-square-foot H-E-B digital tech hub in Austin. Before the pandemic, H-E-B and its Dallas-based Central Market division were already adding curbside and delivery services to its stores. More than 260 of H-E-B’s stores offer curbside pickup.

The Plano Central Market at 320 Coit Road is five miles southeast of the new H-E-B and just north of the President George Bush Turnpike. It pulls shoppers from a big area in Plano and south of it in Richardson and North Dallas.

Butt said Central Market and H-E-B are different stores and do well in other cities where they share the same trade area. “The growth in Collin County will make up for any transfer of sales between stores,” he said.

The Plano Central Market has a new coffee bar with coffee roasting in the store. A wine cave has been added with hard-to-find selections. Seafood is now smoked in house. The café area has been redesigned with a music stage. The international grocery section has been expanded to include 1,500 items.

Originally, the Plano opening and the Central Market anniversary weren’t planned for the same week, but construction delays on the H-E-B store set it back, said H-E-B spokeswoman Mabrie Jackson.

The Central Markets in Plano and Dallas Lovers Lane will celebrate their 20th anniversaries Wednesday with free cake. On Thursday, Plano shoppers can sample free food including smoked brisket that Dallas celebrity chef Kent Rathbun will be tending. The Food Network’s Iron Chef Cat Cora will be there Friday. On Friday evening, the Lovers Lane store will host a free tasting event with legendary Texas chefs Stephan Pyles, Dean Fearing and Robert Del Grande. The events are all free, but customers must register to attend.

CORRECTION, 11:51 a.m., Nov. 2: An earlier version of this story gave the wrong date for a tasting event at the Lovers Lane Central Market with Texas chefs Stephan Pyles, Dean Fearing and Robert Del Grande due to an error in the press release. The chef’s will be there on Friday.

Bed Bath & Beyond is closing 4 more stores in Texas

Reba McEntire celebrates the opening of her Oklahoma restaurant

What do Texans do in a winter storm? Go to Buc-ee’s, naturally

Cowboys’ struggles weren’t all Kellen Moore’s fault, but here’s why it was time for change