The company says it will launch in the spring but declined to give pricing or say whether it will have a new name.

Dallas-based AT&T Inc. will debut an ad-supported version of HBO Max next spring at a lower price, a bet that it can broaden the appeal of a hallowed entertainment brand without eroding its cachet.

The new version of HBO Max will have a “light ad load,” AT&T chief executive officer John Stankey said Tuesday in an interview. Some shows on the service will remain advertising-free and only available to subscribers who pay the full price.

“There is some content where you want the experience to be commercial-free,” Stankey said.

The addition of commercials next year will mark another major change for HBO, a premium cable network that’s being asked to serve as AT&T’s online workhorse in streaming. It will also draw a clear distinction from its longtime rival, Netflix Inc., which has steadfastly refused to carry advertising. HBO Max will join streaming competitors like Hulu and NBC’s Peacock that offer consumers a lower price or free access if they’re willing to watch commercials.

“Virtually any fast-growing company that’s out there today, many of them have free services that are supported by data and advertising,” Stankey said. “Having an advertising option is going to be important to making sure the broadest cross-section of content is available to people moving forward.”

Stankey declined to disclose the price of the new ad-supported HBO Max or say whether it will have a different name. But he said it will cost less than the current price of HBO Max, which is $14.99 a month.

HBO has been commercial-free for its 47-year history, relying instead on a base on paying subscribers, as Netflix does. Stankey said concerns about diluting the brand with ad-supported service were “overblown."

”HBO has had to remake itself multiple times over the last few decades, and this is one of those moments where it’s time to remake itself," he said, adding that video games or music with advertising could go on the platform “over time.”

He also said that Netflix, priced at $13 a month, will need additional sources of revenue in the future to sustain its production spending.

“Netflix can’t offer the number of hours that they’re offering three years from now,” Stankey said. “They’re going to have to, you know, if they’re only supported by subscriptions, charge more.”

HBO Max has gotten off to a relatively slow start. AT&T exceeded the target it set in October of having 36 million U.S. total subscribers to HBO and HBO Max by the end of 2020, Stankey said. But that was a relatively low bar, given that HBO and HBO Max had 34.6 million at the end of last year. HBO Max’s goal is to reach about 50 million U.S. subscribers in five years.

HBO Max is still unavailable on the two most popular connected-TV platforms, Roku and Amazon Fire TV. And HBO Max has struggled to get subscribers who already pay for HBO to activate the new HBO Max app — even though it comes at no extra charge.

In July, AT&T said 4.1 million customers activated the HBO Max service within a month of its May launch. That compares with at least 25 million HBO subscribers who could access HBO Max though a wholesale or retail channel.

Stankey said the early days of HBO Max were hampered by the pandemic, which upended its marketing plan and forced production of new shows to shut down temporarily. Stankey said he is “optimistic” that one of the standoffs that HBO Max is having with Roku and Amazon “will resolve itself in relatively short order.”

And if one of those deals gets completed, he said, it’d be hard for the other to “be the Lone Ranger standing out there on its own.” 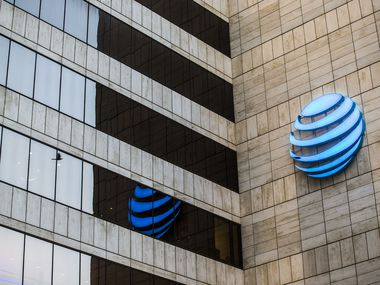 Verizon showed more robust download speeds in Dallas-based AT&T’s own backyard, but 5G still isn’t worth the hype yet, according to PC Mag.
By Dom DiFurio

Verishop is the latest California company to head to Texas

Big refrigerated warehouse is in the works for southern Dallas

Landmark Solana business campus is up for sale