Waymo has been developing its primary operations center in Texas, which is expected to potentially accommodate hundreds of trucks and personnel.

Waymo and J.B. Hunt have now formed a long-term alliance to integrate autonomous trucks with the commercial company’s logistics platform, J.B. Hunt 360. The two companies will conduct multiple pilots to move freight along Interstate 45 for J.B. Hunt’s clients using Waymo’s software called the Waymo Driver, according to a release.

Autonomous vehicle tech companies have been striking partnerships with trucking firms in recent years in order to develop and refine the software they hope will one day be able to replace human drivers, promising greater efficiency, reliability and safety on roadways. Unicorn tech startup Aurora is testing autonomous vehicle tech for ride-sharing in Dallas, and TuSimple and Kodiak Robotics are also exploring autonomous trucking in the region.

Currently, no company developing self-driving vehicle tech has reached fully autonomous operation, meaning a vehicle can drive itself without any human intervention. The trucking firms piloting the technology in Texas run their vehicles along highway routes with humans behind the wheel known as safety drivers.

In 2021 Waymo, owned by Google parent company Alphabet, began developing its 9-acre central logistics hub in Lancaster for working on its autonomous trucking technology. The company previously said the facility would employ “hundreds” and open sometime early this year. 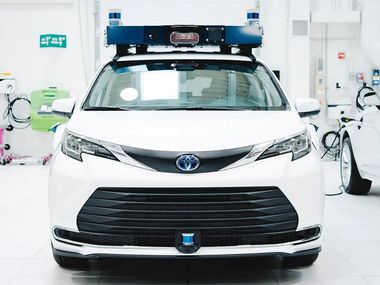 Aurora wants to power self-driving ride-share vehicles, and it’s testing them in Dallas

Texas has become a popular proving ground for autonomous vehicle testing due to its climate, relatively flat landscape and friendly state laws surrounding the autonomous vehicle industry. Waymo and J.B. Hunt began working together in June 2021 to haul freight between Fort Worth and Houston with Waymo’s AI-powered self-driving tech.

In a statement, J.B. Hunt vice president and chief sustainability officer Craig Harper said that the company’s pilot program with Waymo helped the trucking firm better understand how autonomous technology could be implemented.

“This strategic alliance will continue that momentum and further explore the intricate details that would make this a value-driven solution for customers,” Harper said. “We believe autonomous driving technology will help us create the most efficient transportation network in North America, and our collaboration with Waymo is a pivotal step towards fulfilling that mission.”

Waymo’s head of commercialization, Charlie Jatt, said its work with J.B. hunt has been “fruitful” so far.

“Establishing this strategic alliance marks an exciting moment for our relationship, and more importantly, paves the way for us both to help grow the foundations for successful deployment and to capitalize on the benefits of autonomous driving technology,” Jatt said in a statement.