A global remedy: Chicken soup recipes from around the world

The universal feel-good elixir expresses itself deliciously from culture to culture.

It’s rare that a dish appears in cuisines all over the world. Chicken soup — the global feel-better elixir — is one of them. Soothing and comforting at a time when so many Americans are ailing from a pandemic or smarting from bruising political battles, it is this season’s perfect panacea.

Chicken soup can celebrate what so many of us have in common: When someone sniffles, moms and grandmas (and increasingly pops and grandpas) around the globe drop chicken in water with aromatics and simmer away.

At the same time, from the Americas to Asia, from Eastern Europe to the Levant and Africa, chicken soups have the qualities and tastes that make every culture deliciously unique.

There’s the American-Jewish version I grew up with: a chicken in the pot with celery, onion, carrots and dill; egg noodles went in at the end. There are more colorful versions, like a Mexican caldo de pollo, zingy with lime, that might feature cabbage, zucchini, garbanzo beans or chunks of corn-on-the-cob — plus lots of cilantro.

There are tangy, herbal, coconutty versions, like Thailand’s tom kha kai; fragrantly spicy chicken soups called djaj from Lebanon or Morocco; creamy examples like Italian Stracciatella alla Romana or Dutch Koninginnesoep. In China, there is rich and tonic qing dun quan ji, in which a chicken is blanched then long-simmered in water with a big piece of smashed ginger, scallions and Shaoxing wine; some cooks add tonic herbs or roots like Chinese angelica, ginseng or milk vetch, or goji berries toward the end. 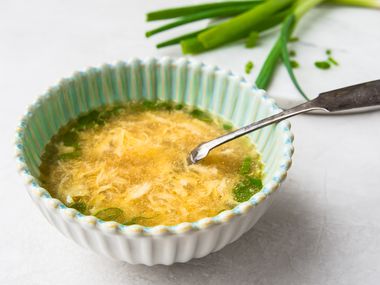 Tibetan Thukpa has tomatoes, vermicelli, vegetables and chiles; in Iran, chickpea-and-lamb meatballs swim with the chicken in abgusht-e-margh ba kufteh-ye nokhodchi; and in Vietnam, big rice-noodle-happy bowls of pho ga, whose broth is scented with star anise and cinnamon, come with an array of fresh herbs, bean sprouts and chiles to add in at the table.

What they all have in common is simple: At their most basic, they are chicken (including its bones) cooked in water, a process that not only results in deliciousness, but also extracts nutritional components that otherwise would have been lost. For ages, people have considered chicken broths to be medicinal. We know that the Persian physician and philosopher Ibn Sina (also known as Abu Ali Sina and Avicenna), who lived from  980 to 1037 and was one of the fathers of modern medicine, believed it was healthful; the notion was shared throughout the Mediterranean and Western Europe.

Whether or not it is provably curative (a number of studies have suggested it is, but have been inconclusive), it is demonstrably delicious, and there is undeniably curative value in being nurtured. It was partly that universal idea that sparked Portland, Ore., chef Jenn Louis to write a cookbook, published in September: The Chicken Soup Manifesto.

Several years ago, when Louis was traveling home from a charity event and had come down with a bad cold, her sister surprised her by leaving a giant pot of chicken soup on her doorstep.

“I ate three bowls, really fast,” Louis told me in a phone interview. “Though I was still sick, I felt so much better. And I just kept thinking: This is a thing; this is magic!”

The book, which includes 131 recipes from 64 countries, is a chicken soup-lover’s goldmine.

“We think of our Eastern European Jewish chicken soup as what chicken soup is,” said Louis, “but there’s a whole world out there.”

The first one I made was a rich and satisfying peanut chicken soup from Ethiopia called Ye Ocholoni Ina Doro Shorba. Sweet potato, onions and carrots simmered in chicken stock with lots of warm berbere spice give body to what becomes a purée with peanut butter; rice is added toward the end. It gets a crunchy garnish of chopped roasted peanuts, along with more berbere spice, and aromatic with cardamom, coriander and cinnamon.

If you’ve always wanted to visit Rio, you might dive into a bowl of canja de galinha, Brazil’s beloved chicken-and-rice soup.

“Canja de galinha is the soup my grandma used to make — not just for me but for our whole family,” says Junior Borges, the Rio-born vice president of culinary for the Village Dallas, and executive chef of Meridian, the Village’s flagship restaurant that’s expected to open early next year.

The chef still enjoys canja. In fact, his mom, who’s originally from Bahia but now lives in Dallas, made him a bowl just last week.

The chef’s grandmother usually started with chicken neck, wings and thighs, “and served it with the bones and everything. Sometimes it had carrots or whatever we had in the kitchen, but always rice, chicken, the stock, and then you put a decent amount of olive oil and herbs — parsley, cilantro, maybe some scallions. Primarily green stuff, which goes into almost everything the Brazilians do.”

Gently seasoned with lime and finished with lots of parsley and cilantro, the version Borges shared with us — which is close to his grandma’s — starts with bone-in chicken legs or breasts (or both), which you remove from the bones for nicer presentation. It gets extra body from diced potato. The canja comes together surprisingly quickly; you can have it on the table within an hour.

“I think it’s definitely one of those comforting, comforting things. For us, it’s our chicken noodle soup," he says.

In coming weeks, we will feature chicken soups from other far-flung destinations — including one or two more from Louis' book — so watch this space for Part 2 and Part 3. In the meantime, you’ll find the recipe for my mom’s chicken soup at Cooks Without Borders.

Oh, and if you’re looking for holiday gifts, The Chicken Soup Manifesto might be just what the doctor ordered.

2 tablespoons berbere spice (see recipe below), plus additional for garnish

Heat the vegetable oil in a large pot over medium-high heat. Add the onion, carrot and sweet potato and cook about 5 minutes, until the onion becomes translucent. Stir in the berbere spice and salt, then add the chicken broth and bring to a gentle simmer.

Place the chicken in the soup and cook gently until just cooked through, about 8 minutes. Remove the chicken from the soup, then continue cooking at a gentle simmer for 8 to 10 minutes, until all the vegetables are very tender. Cut the chicken into bite-sized pieces and set aside.

Add the peanut butter to the soup, and, using an immersion blender if you have one, or a blender if not, purée the soup until very smooth. If using a blender, take care to remove the center piece on the blender cover — the hot soup will splatter without a vent. Pour the soup back into the pot if you used a blender.

Add the rice and cook at a very low simmer, stirring with a whisk, until the rice is tender, about 15 minutes. Make sure the rice does not stick to the bottom of the pot, and the soup does not become too thick and burn. If necessary, thin the soup with a little water.

Adjust the seasoning, adding salt if necessary, and ladle into bowls. Divide the chicken pieces among the bowls, then sprinkle them with the peanuts and a little more berbere.

1 tablespoon chile powder, such as ancho or New Mexico

Remove the cardamom seeds from the pods and discard the pods. Place the seeds in a small pan with the cloves, coriander and fenugreek and toast over medium heat, making sure not to burn the spices, until fragrant. Set aside to cool.

When the spices are cool, grind them in a spice grinder, coffee grinder or mortar, then transfer to a small bowl and stir in the allspice, chile powder, salt, ginger and cinnamon. You’ll use most of it for this recipe; stir the remainder in an airtight container for up to 6 months.

2 pounds bone-in chicken thighs, legs or breasts, or a combination

One-half of a medium onion, diced

1 large carrot, peeled and cut into medium dice (about 2/3 cup)

Season the chicken pieces with salt, black pepper and lime juice. Heat the olive oil in a large pot over medium heat until it is shimmering, then add the onion, garlic and chicken pieces. Sear the chicken pieces on all sides (no need to brown; just briefly sear). Add 8 1/2 cups of water, raise the heat to high, bring to a boil, then reduce the heat so that the liquid simmers. Continue simmering for 30 minutes, till the chicken is cooked.

When you’re ready to serve, stir in the parsley and cilantro, taste and adjust seasoning, adding salt and pepper as necessary. 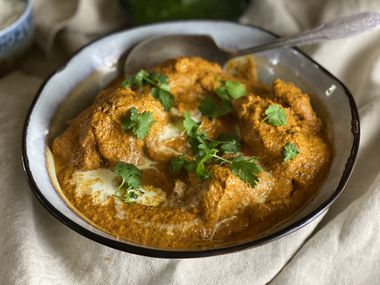 ‘I’m proud of it’: How ‘Mama Nazy’ and her sons started Cafe Izmir 25 years ago