Rise & Thyme is the ‘Chopped’ judge’s first restaurant in Dallas.

Food Network television chef Amanda Freitag is opening a restaurant called Rise & Thyme in the AT&T Discovery District, a development in downtown Dallas with restaurants and a food hall.

Rise & Thyme is expected to open Sept. 18. It’s a counter inside the food hall serving salads, sandwiches and “eggs all day,” the menu says.

Rise & Thyme will be open for breakfast and lunch at first; dinner comes later.

The AT&T Discovery District and its coming-soon 20 bars and restaurants was described by us in February 2020 as an “art-filled, restaurant-focused, $100 million development installed not only for the 5,500 AT&T employees who office on site but also for anyone else in downtown." Office workers have not returned en masse because of the coronavirus pandemic yet, and a lack of foot traffic has been a problem for restaurant owners. 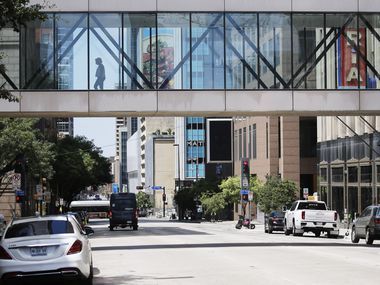 A trifecta of disease, social upheaval and economic collapse threatens to alter the beating heart of Dallas for the foreseeable future.
By Dom DiFurio and Maria Halkias

“Clearly the world has changed in the months since we first started working on this restaurant, but one thing that hasn’t changed is how excited I am to be able to open Rise & Thyme in Dallas,” Freitag says in a statement. “This city has given me so many delicious food memories, and I am thrilled to be able to be a part of this unique culinary scene.”

AT&T Discovery District is moving forward. The district’s first restaurant, Jaxon Texas Kitchen & Beer Garden, remains open since its debut in March. Both Jaxon and Rise & Thyme were created by Hospitality Alliance, the company AT&T hired to create Jaxon and the food hall.

Rise & Thyme will partner with local companies La Casita Bakeshop and Village Baking Co. for pastries. Menu items include an egg muffin with Taylor ham and muenster; smoked salmon toast with “everything” spice; four-cheese grilled cheese with parmesan butter; and a non-meat patty melt made with an Impossible Foods burger. The shop will also sell espresso drinks.

“I can’t even begin to say how happy we are to finally be able to open this restaurant with Amanda,” said Kevin Lillis, CEO and founder of Hospitality Alliance, in a statement.

Sarah Blaskovich, food writer. Sarah writes about restaurants, bars and culture in Dallas. She also appears on NBC5 twice a week. Follow @sblaskovich and ask her what to do, where to eat or where to drink in your 'hood.

The comeback quiche: 4 modern recipes for breakfast, lunch or dinner

Washington can’t find consensus on anything, so politicians keep shoving their ideas down our throats