During the COVID-19 pandemic, here’s how one of Dallas' densest restaurant streets tries to attract diners.

Parking on Lowest Greenville is easier these days.

Parking was once a sticking point on the popular Dallas street, but with decreased traffic across North Texas due to the coronavirus crisis, swooping in and out for curbside pick-up or patio dining has never been easier.

Since Lowest Greenville’s revitalization a handful of years ago, it transitioned from salty bar scene to a dining destination. And since COVID-19 struck, Lowest Greenville has seen movement in the past six months on some of its restaurants: Gung Ho and Tacos Mariachi closed. Ngon Vietnamese Kitchen opened. And longtime tenant Greenville Avenue Pizza Co. embraced the change in consumer behavior early, installing Plexiglass dividers in June inside the restaurant to help customers feel safer.

Michael Miller, owner of Dallas commercial real estate company Stablemade Group, puts Lowest Greenville on par with Deep Ellum and the Bishop Arts District in terms of real estate pricing and allure for restaurateurs who want to operate in Dallas proper. (His company has placed restaurants such as HG Sply Co. on Greenville Avenue, High Fives on Henderson Avenue, Palmer’s Hot Chicken in Lakewood and Boulevardier in the Bishop Arts District.)

A walk through Lowest Greenville shows that some consumers remain cautious about restaurant dining — but that there’s some opportunity, too. Miller points to the vacant Taco Cabana, which famously operated on Greenville Avenue for 26 years until its closure in early 2020. It’s a prime spot for the next restaurant, he says: “It’s got great bones, it’s freestanding. It’s got its own exclusive parking. And it’s got a drive-through,” he says. “I would say it’s surprising that no one has scooped it up.”

So what’s open, what’s closed and what’s coming soon on Lowest Greenville in Dallas? We took a walk up and down the street, from Belmont Avenue to the south side of Ross Avenue. Here’s a list of what we found.

Sevan G&G Cafe, a Mediterranean restaurant, is doing take-out and dine-in. It’s been open since 2004.

Charlie’s Creole Kitchen is open and recently redid its menu, according to Facebook. New menu items include pan-fried snapper topped with avocado pico and a muffuletta sandwich. Nearby, Subway is still in operation. And The Avenue Sports Grill, a sports bar that debuted in fall 2019, is open.

A stalwart of the Lowest Greenville strip, The Libertine Bar reopened in late August. The bar served alcoholic drinks to-go between late June and Aug. 30.

La La Land Kind Cafe, a coffee shop that employs adults who have aged out of the foster-care system, remains open. (The owners opened a second La La Land on Oak Lawn Avenue during the pandemic.)

Rapscallion is open and is offering discounts on its food and drinks. One recent deal was $1 East Coast oysters with the purchase of a bottle of wine priced at $50 or above.

Truck Yard reopened Sept. 4. It’s been previously classified as a bar but was able to reopen by applying for a receiving a food and beverage certificate from TABC during the COVID-19 pandemic. Check out their safety pledge.

On the east side of the street, Simply Fondue is doing its four-course tastings. Company Cafe & Bar, known for its weekend brunch options, is open. Next door, Ragin' Crab Cafe Dallas is open and promises “serious social distancing,” even on the patio — where occupancies are not limited, according to the governor’s orders.

Teppo Yakitori continues to sell sushi at dinnertime. It asks patrons to make reservations in advance. Nearby, HG Sply Co., a restaurant that has been popular for years for its healthful options, is open. Its third-story patio offers bird-eye views on temperate Texas days.

Then there’s a line of restaurants and bars open on the west side of the block, all serving food and drinks: Greenville Avenue Pizza Co. remains open and has done steady business, in part because it offers delivery pizza, a popular food during the pandemic. It celebrates its 13th birthday on Oct. 13. Village Baking Co. Boulangerie is still slingin' brioche waffles, croissants and coffees. Its Design District location is temporarily closed, so go to Greenville if you want fresh-baked bread or a patio with wifi. Alamo Club is open for dinner only on weekdays, all day on Saturdays and Sundays. They’re doing brunch, with “fat stack” pancakes and cornflake fried chicken. Alamo Club also has delivery, curbside and to-go window pickup. The Old Crow, a bar that has secured its food and beverage certificate, is open. Ngon Vietnamese Kitchen is a newcomer to Greenville Avenue, having opened mid-pandemic in late July. Dishes include bánh mì, spring rolls and a pork noodle dish named bun cha Hanoi. And Gallo Nero is open and serving its “nothing fancy, just great Italian food,” as the website says.

Standard Service, located just off of Greenville on Alta Avenue, is another restaurant that opened during the pandemic. The original Standard Service was in Rockwall before it moved to Heath. SS#2 sells BLTs, burgers, chicken-fried chicken and the like for delivery, pickup or dine-in.

The Merchant at Lower Greenville, a shop selling candles, handbags, whiskey glasses and other gifts, continues to sell coffee.

Wabi House continues to turn out bowls of ramen. The company has started offering ramen delivery — which was formerly not available. Try this excellent soup-less noodle dish.

The Halal Guys, a gyro and chicken spot, remains open, as does its neighbor John’s Cafe — a family-owned restaurant in operation since the early 1970s. Thai Thai Restaurant is also open. Thai Thai is a "restaurant so nice we named it twice,” the website says. Cute.

Across the street, newish restaurant Flatbread Company is firing up its pizza ovens. It has a generous patio and live music on Wednesdays.

If you hop over Ross Avenue on the other side of Greenville, Taquero recently opened in place of the former Pints & Quarts. Taquero moved to the Greenville area from West Dallas, but owner Fino Rodriguez says the new restaurant has the “same soul” as the original. Some of the dishes he’s excited to sell are ceviche, taco toro and Mexican Brussels sprouts.

Ships Lounge, which dates back to the late 1940s, reopened in mid-October after being closed for several months.

Toasted Coffee + Kitchen is big on brunch. Its menu of Vietnamese coffee, kombucha, smoothies and avocado toast is also available for delivery or pick-up.

Down the street, Nick Badovinus’ new, hot restaurant Desert Racer is adapting to the pandemic. He’s using the 8,000 square-foot patio as a pick-up and hangout spot for two pop-up concepts: Vantina, a taco shop; and Ese Pollo, a smoked chicken and margarita shop. On sunny days, even during the pandemic, Desert Racer’s patio is a hot spot.

Greenville Avenue had a handful of vacancies even before the pandemic. From Belmont, moving south:

Below are the restaurants that closed since the pandemic started. Some are temporary. As of Oct. 7, Gov. Greg Abbott reversed his executive order, saying bars can open effective Oct. 14 if they get county approval. Several of the bars listed here cannot reopen yet, however, because Dallas County Judge Clay Jenkins has said bars in Dallas County need to remain closed.

Teeny bar Single Wide is temporarily closed, but owner Kim Finch recently opened a restaurant and bar in Deep Ellum called Thunderbird Station that will eventually supply food to Single Wide. Expect Single Wide to reopen in late October or early November — perhaps in time to drink before, during or after the election? 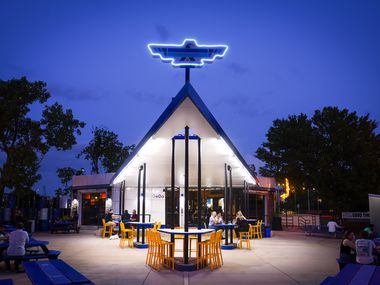 The longtime auto station in Deep Ellum is now a car-themed restaurant and bar with just the right amount of kitsch.
By Sarah Blaskovich

Tacos Mariachi is a casualty of the pandemic; the lack of walk-up traffic during the beginning of the coronavirus crisis hit the shop hard. Owner Jesús Carmona told us back in June that he’s looking to relocate his original location in West Dallas. The company got national recognition when it was featured on Diners, Drive-Ins and Dives.

Gung Ho closed during the pandemic. Owner Elias Pope, who operates several restaurants along the strip including HG Sply Co., Leela’s and Standard Service, will not be putting a new concept in that space (as he did before Gung Ho, when he operated a throwback kitchen named Remedy).

Several restaurants in a row shuttered, mid-pandemic: Eastside Social, which had a rooftop patio, has closed. So have Laurel Tavern and the Wah Wah Room. A few doors down, a cocktail bar named ABV Establishment remains closed because of Jenkins' decision to keep bars closed, temporarily.

Restaurant openings are slow during the pandemic — but there is some movement along the block.

Know of any restaurants or bars we missed? Email sblaskovich@dallasnews.com.

Story updated Oct. 20, 2020 with news that Ships Lounge is no longer closed.

When are stores opening Black Friday?