If you need mental health therapy in Dallas-Fort Worth, get in line. A very long line

After nearly 20 years in Dallas’ West Village, Mi Cocina will close and relocate

The current restaurant, near Lemmon and McKinney avenues in Uptown Dallas, will remain open for a few more months.

By the end of 2021, Mi Cocina will leave Dallas’ West Village shopping development and reopen at a new address in Uptown Dallas.

The restaurant has been in West Village since 2002, serving as a nearly 20-year fixture where shoppers could stop and grab a plate of brisket enchiladas and a frozen tequila cocktail called a Mambo Taxi — which has become an iconic Dallas drink.

Mi Cocina first opened in Dallas 30 years ago and has grown to 21 restaurants in Dallas-Fort Worth.

He considers the approach for Klyde Warren Park and Uptown Dallas to be “two different areas,” with two distinct customer bases. The West Village restaurant will find a new home at an address on McKinney Avenue — one Guevara won’t name right now because it currently has another tenant.

“It’ll be neat: We’ll be able to have both the Klyde Warren space that opens in the fall and this new space that opens later in the year,” Guevara says. “There will be two locations on McKinney where people can drink Mambos.”

All we know for now is that the new restaurant is near the West Village restaurant — “blocks away,” the CEO says.

The Mi Cocina lease in West Village ends Dec. 31, 2021, and Guevara says he hopes the new Uptown Dallas restaurant will have a “seamless transition” around the same time to the new address.

The new Mi Cocina in Uptown will have a bar serving premium tequilas and cocktails, similar to the popular third-floor Monkey Bar at the Mi Cocina in Highland Park Village. The Uptown version will “have its own vibe,” Guevara says. It will be called Seis Segundos.

“We’ve had a really great 20-year relationship with them,” he says. He’s been a partner in the project since 1997.

Bagwell confirms that a Mexican restaurant named Hugo’s Invitados will open in West Village, in the spot where Mi Cocina was, in early 2022. Bagwell calls the menu “sophisticated” and says he likes that they don’t use fryers or freezers in the restaurant.

Mi Cocina will remain in operation for several more months in West Village, at 3699 McKinney Ave., Dallas. It’s expected to close and relocate in late 2021. 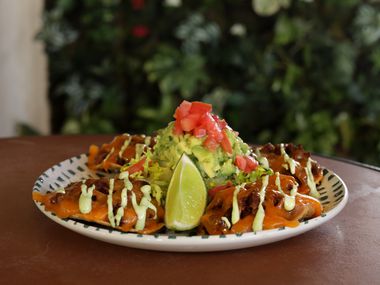 Mambo Taxis and brisket tacos are coming to Dallas’ most iconic park.
By Sarah Blaskovich

Inside Casablanca, a ‘grown and sexy’ lounge in Dallas’ Oak Cliff

After 43 years, Fort Worth burger joint Fred’s Texas Cafe is closing and moving

Dallas Bishop T.D. Jakes is piloting a new development in Atlanta, with plans to spread to D-FW