The venue will officially relaunch Oct. 5 and will feature an improved audio system, a new look and a new menu.

The restaurant and live music venue is rebranding with an entirely new look and name — Amplified. Located at 10261 Technology Blvd. in Dallas, Amplified will officially launch in conjunction with a live concert by indie rock outfit Manchester Orchestra on Oct. 5, the venue said in a release.

Amplified will have a renovated interior and exterior, an updated sound system, massive LED TV walls and a new menu that includes old Gas Monkey favorites as well as new items like chicken Marsala and shrimp, chicken and sausage étouffée.

“We’re excited to unveil Amplified and show D-FW what we’ve been working on,” managing partner Alex Mendonsa said in a statement. “After a lot of hard work, we’ve remade this space inside and out, focusing our attention on sound quality, guest comfort and our menu.”

In 2014, Gas Monkey Bar N’ Grill was named one of Dallas’ hottest concert venues. Founded by Fast N’ Loud star Richard Rawlings, the venue became the center of legal battles between Rawlings and the venue’s managing partner beginning in 2018. 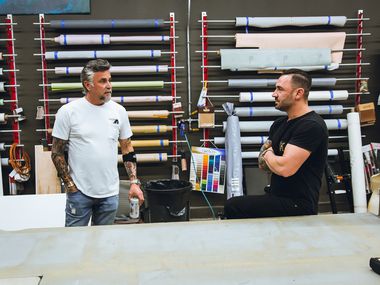 Rawlings is no longer affiliated with the Discovery Channel and is planning a YouTube show tentatively named ‘Monkey Trap.’
By Sarah Blaskovich

Rawlings was a founder and served as the face for Gas Monkey Live but Mendonsa, who has previously run the House of Blues Las Vegas, ran operations.

The $6 million lawsuit against Rawlings alleged that he defamed his business partners who ran the venue and made “deliberate and deceitful attempts” to get out of his contract licensing the Gas Monkey name to the venue’s operators. Rawlings denied the claims and countersued for $1 million in 2019, claiming the restaurant was illegally using the Gas Monkey name since he terminated the contract nearly a year earlier.

According to the suits, the disagreements over management of the venue date back to its construction.

Gas Monkey Live, the separate music venue portion of the Gas Monkey Bar N’ Grill, closed temporarily due to COVID-19 in March 2020. It then closed permanently, merging the live music business into the Gas Monkey Bar N’ Grill, according to CultureMap. One employee told CultureMap at the time that the closure of the venue was less to do with the pandemic and “more to do with landlord issues.”

When Dave’s Hot Chicken opens in Plano, will there be lines, like last time in Dallas?

Date night in: Lasagna from Jimmy’s Food Store with wines under $25