Try the scallops with ‘corn ribs,’ the nopales salad, and the quesillo.

The name Modest Rogers comes from a high school friend who joked that it’s what Modesto Rodriguez’s name would translate to in English. “I’ve always wanted to use it as a band name,” he says, but instead it’s become the embodiment of another dream at the encouragement of his wife, Kathryn Rodriguez, a full-time medical student. She’s the person responsible for spurring Rodriguez to leave a graphic design and part-time bartending job at Stan’s Blue Note after they met, when he wooed her by cooking meals for her on date nights.

A native Venezuelan, Rodriguez spent his elementary years in Euless and attended high school in Midland after migrating with his family at a young age. He considers himself to be “more Texan than Venezuelan,” he says, and maintains that he doesn’t want to be pigeon-holed as a Venezuelan chef. “I don’t want restrictions,” he says with a gentle chuckle. 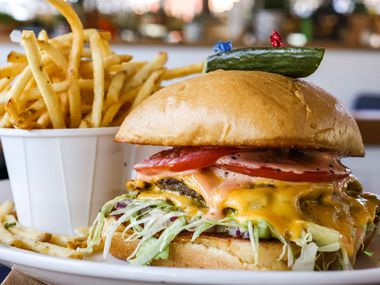 National Anthem, the first restaurant in Dallas’ growing East Quarter, is open — and it’s a stunner

Find it in the pie-shaped building on Commerce Street.
By Sarah Blaskovich

Rodriguez seeks instead to present the foods he grew up eating in North and West Texas, like Tex-Mex and Mexican food, while also exploring the roots of Venezuelan cuisine, something he considers to be heavily Spanish-influenced with techniques from West Africa.

For example, unlike the nixtamalization process used in Mexico, masa for the Venezuelan daily bread — arepas — was originally made by pounding corn and water in a pilon, a giant wooden mortar that was wielded while standing up, similar to the method West Africans used to beat cassava and other tubers in the making of fufu.

He eventually wants to expand the small menu at Modest Rogers to include from-scratch arepas as well as flour tortillas, but in the meantime, diners can start by savoring a perfect example of Rodriguez’s synthesis of culinary training and upbringing in a dressed-up version of nopales — a cactus salad with peppery radishes, fresh herbs, fried shallots, and confit San Marzano tomatoes.

Nopales are a dish he enjoyed while living in West Texas, and cactus is one of his favorite ingredients to cook with for its texture and flavor, he says. He knows they can become mushy and slimy if cooked for too long, similar to okra, so he carefully tends to timing and adds vinegar during cooking to keep the dish vibrant. The sliced nopal pads are finished with a char on the plancha and a fish sauce vinaigrette, making this singular dish alone worth making a reservation. 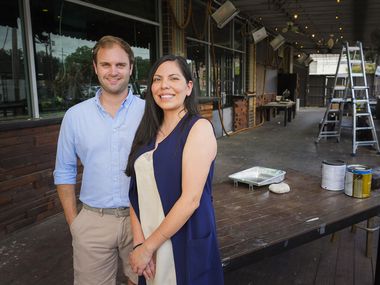 ‘We’re still going to do this,’ the co-owner says, after a tough start for Meyboom Brasserie.
By Sarah Blaskovich

Rodriguez praises Julian Barsotti, the chef-owner at Nonna and Carbone’s who’s set to open two more restaurants this fall, for the knowledge he’s passed on, including how to pivot during the shutdown. His experience working at Nonna last year, along with a small kitchen and supply chain issues, are factors that have led him to keep the menu small at Modest Rogers, with rotating seasonal dishes.

The two main courses he’s been told to keep are the carne asada ($28) with Rosewood Ranch’s Texas-raised wagyu, served with chimichurri, marble potatoes, and an arugula salad, and the Nantucket scallops in butter with fried corn ribs ($24). The sheared and fried corn ribs are meant to be eaten with the hands and resemble street elotés with butter, sour cream, and Parmesan cheese.

“I’ve always thought elotés would be a great addition for the butter element [of scallops],” he says, “but I didn’t want to put just corn or a whole cob on the plate. When I saw the ribs on the Internet, I thought, that’s a good way to present it. It makes a cleaner plate, and I’m a huge advocate of eating with your hands.”

For dessert, there is quesillo, a denser version of flan where Rodriguez uses brown sugar, brandy and orange juice to make the caramel instead of the typical rum, “to switch it up and get more citrusy flavor,” he says.

Modest Rogers is currently open for dinner Wednesday through Saturday, and lunch service rolls out this week on Thursday and Friday with salads, a hamburger, a Cuban, and a turkey sandwich.

The temporary al fresco-friendly weather and BYOB policy make now the ideal time to snag one of the three patio tables. The restaurant space actually has two more patios, which Rodriguez hopes to expand into soon, where he’ll station a smoker for barbecue. And once he obtains his liquor license, he’ll serve beers from Peticolas and other local breweries, along with an approachable wine list, tequila and mezcals, and “maybe” (hopefully!) some margaritas.

Especially now with the option to bring your own alcohol, Modest Rogers is a new restaurant to try where you won’t walk away feeling like you’ve spent the equivalent of a small vacation. Even though 90 percent of the menu is made from scratch, Rodriguez wants to keep pricing affordable. “I want it to be a place for Thursday nights, too,” he says.

When Dave’s Hot Chicken opens in Plano, will there be lines, like last time in Dallas?

Date night in: Lasagna from Jimmy’s Food Store with wines under $25