2022 preseason all-area offense: Denton Guyer’s Jackson Arnold is our Player of the Year

SportsDayHS will be breaking down and analyzing Dallas-area teams before the start of the 2022 season.

SportsDayHS will be breaking down and analyzing Dallas-area teams before the start of the 2022 season. Today we examine the Preseason Offensive Player of the Year along with the all-area offensive team.

Offensive Player of the Year

After a stellar junior season in which Arnold won The Dallas Morning News’ 2021 Offensive Player of the Year award, expectations are even higher for the Denton Guyer quarterback heading into his senior year. The Oklahoma commit is the top-rated signal caller in the state and 16th-ranked player in the nation.

In his first season as Guyer’s starting QB, Arnold led all Dallas-area 6A quarterbacks with 3,931 passing yards. He recorded 46 total touchdowns and threw just five interceptions on the year, while rushing for an additional 659 yards. He led his team to its second state championship game in three seasons. Finally coming away with the title would be the ultimate accomplishment for the young star destined to dominate in his senior season.

No Dallas-area 5A quarterback was more productive than Luster last season, who totaled 4,785 yards and 54 touchdowns as a junior, earning him first-team all-area honors. The dual-threat QB committed to SMU this offseason while also transferring to McKinney where he will play his final high school season. After a standout performance at the state 7-on-7 tournament in College Station in June, Luster has brought McKinney back into the conversation. He’ll have the opportunity to go head-to-head with Arnold and Denton Guyer on Oct. 27 while helping his team improve on its District 5-6A last-place finish in 2021.

For the second year in a row, Allen is the top returning Dallas-area rusher for Class 6A. The two-year starter recorded his second consecutive 2,000-yard season in 2021, as he totaled 2,145 yards and 32 touchdowns and was named the District 4-6A MVP as a junior. Despite posting standout numbers in all three of his high school seasons, Allen remains under-recruited, having only received offers from Army and Air Force, per 247sports.com. If he can record another 2,000-yard season as a senior, more programs could start calling.

When Wisner transferred from Waco Connally to DeSoto this offseason, he immediately became the top-rated senior running back in the area. As a junior, Wisner rushed for over 900 yards and 12 touchdowns before committing to Texas in April. Wisner joins a DeSoto offense loaded with weapons but will play a crucial role of filling the hole left by Chris Henley Jr.

For a SOC team that averaged 49.4 points per game, Brooks anchored the offensive line. He didn’t allow a single sack all season for an offense that averaged 425 yards per game and featured two 1,000-yard rushers. He was the only junior offensive lineman to earn first-team all-area honors last season and will be a leader on an offense that has to replace its quarterback and both running backs.

Based on his 84-inch wingspan and 10-inch hands, Robinson has already been compared to NFL offensive tackles, as 247sports wrote the Arlington Lamar lineman had the looks of a pro tackle with the potential to be a Power Five starter and multi-year, all-conference performer. The top-rated offensive lineman and No. 12 overall player in the area committed to Baylor on July 4. He’ll be the leader on an Arlington Lamar team that looks to improve on its 2-8 finish from last season.

Ranked 43rd among offensive tackles in his class, the Frisco Wakeland lineman joins the long list of Dallas-area recruits to commit to Texas this summer. He was a part of a Wakeland team that reached the third round of the playoffs last season, tying its deepest postseason run ever. Under new coach Chan Isom, Wakeland is expected to contend for the District 6-5A title again this season.

Cojoe is another Dallas-area offensive lineman who committed to Texas as the 59th-best interior lineman in the nation. The No. 41-ranked recruit in the area helped lead his team to the regional semifinals and an 8-5 finish last season, slotting it eighth in SportsDay’s final 5A rankings. Cojoe contributed to an offense that averaged 51.3 points per game.

The 43rd-best offensive tackle in the nation helped Melissa advance to a regional final appearance in 4A Division I last season, finishing 11-3 overall. He decommitted from TCU on June 26 before committing to Texas the same day. With Melissa moving up to 5A this offseason, Goosby will be a key contributor, as the Cardinals acclimate to stiffer competition.

After hauling in 29 touchdowns over the last two seasons at DeSoto, Cook projects to be the area’s top wide receiver this fall. The No. 3 recruit in the area and No. 5 wide receiver in the nation committed to Texas after a standout junior season in which he hauled in 38 passes for 806 yards and 19 touchdowns. Cook will be the No. 1 weapon for new quarterback Darius Bailey and is expected to be a leader on a DeSoto team that is projected to be one of the area’s best this season.

Cozart was a deep threat for Marcus last season, as he averaged 18.9 yards per catch. He caught 36 passes for 680 yards and 11 touchdowns in his junior season and first at the school. After finishing 8-3 last year, the Oregon pledge will lead his team again this year, after finishing second in District 6-6A before falling to Guyer in the first round of the playoffs.

Even as Rockwall’s No. 2 receiver in 2021, Noble Johnson managed to put up big numbers. He caught 49 passes for 875 yards and eight touchdowns, which ultimately earned him a spot on Clemson’s roster. He showed his potential in Week 2 where he recorded 11 catches for 241 yards and four touchdowns in the win over Lake Travis. The No. 22 recruit in the area returns as the top target for an offense that averaged 48.8 points.

White earned first-team all-area honors as the area’s top specialist last season. He connected on 10-of-12 field goals with a long of 55 yards and 79-of-81 extra points for a 14-1 team that averaged 44.4 points per game. He also averaged 42.3 yards per punt with a long of 62 and had 21 punts downed inside the 20-yard line. He earned MaxPreps second-team junior All-American honors and plans to continue playing both football and baseball at Texas A&M following his final season at Carroll.

Miyazono did it all for Frisco last season. While he is committed to play linebacker at SMU, he showed he was a versatile playmaker on both sides of the ball, accounting for 16 total touchdowns as a part of Frisco’s Wing-T offense. He earned his first varsity start on Sept. 3 against Frisco Reedy where he carried his team to a 43-30 win by scoring four touchdowns with 370 yards of total offense. On the defensive side, he recorded 73 tackles, one sack, four pass breakups, two forced fumbles and two interceptions. Miyazono will continue to play a big role on both sides of the ball, especially after QB Wyatt Carson graduated.

2022 preseason all-area defense: Denton Ryan’s Anthony Hill is our Player of the Year
10 Dallas-area football storylines to watch in 2022, including clashes vs. national teams 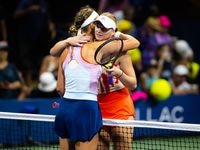 What to expect when Aaron Judge comes to Arlington in search of home run No. 62

5 things we learned in Mavs training camp: Josh Green backs up hype next to Luka Doncic

5 things to know about Dak Prescott’s injury: When will the Cowboys QB return ? 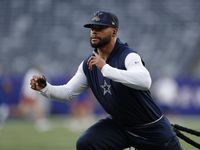