Foster is preparing to represent her country as the youngest member of the USA Deaf Women’s Volleyball team at the Deaflympics in Brazil.

PLANO — Nicole Foster knows all the horror stories about her near-tragic birth.

She knows she nearly died the day she was born. She knows that doctors thought that if she did make it off of life support and beat the 50-50 odds of survival, that she would have brain damage.

Yet here she is, at the age of 16, starting as an undersized sophomore hitter for Plano Prestonwood Christian, the best private school volleyball team in the Dallas area. Watching her sky above the net for one kill after another — always in the right place to receive the pass from the setter — one would never know that she is deaf.

In May, she will represent her country as the youngest member of the USA Deaf Women’s Volleyball team at the Deaflympics in Brazil. It’s like a story straight out of the movies.

Joe Foster struggles to keep his emotions in check when recounting the terrifying story of his daughter’s birth. It pulls at the heartstrings to hear him talk about how Nicole had to be resuscitated, went many minutes without oxygen upon delivery and then had seizures.

“They started doing CPR and had a bag over the baby’s face to try to get oxygen. They were working feverishly to get her back to life,” Joe said. “It took 10 minutes to get color back and to get a heartbeat.

“We were very scared. It was a complete surprise. We had no idea that she was going to be a still-born. My wife had a very easy pregnancy. No complications at all.”

At 48 hours old, when Nicole was on a ventilator, tests showed zero brain function. The family was told to prepare for the worst-case scenarios, such as Nicole being wheelchair-bound, in a vegetative state, and the possibility of severe cerebral palsy. They were told there was nothing else medically that could be done to improve her condition.

But as Prestonwood coach Ryan Mitchell says, Nicole “has basically been a fighter her whole life. Since the minute she was born she has been fighting and showing her resiliency.” When she was one week old, the Foster family received unbelievable news. There was no brain damage.

“The hospital staff was completely confounded and had no explanation for this incredible turn of events,” Joe said. “She’s our miracle child.”

After surviving all of that, more problems awaited. It was discovered that Nicole had profound high-frequency hearing loss. At 23 months of age, Nicole was fitted for her first pair of hearing aids.

“She looked like a 6-year-old MMA fighter that went three long rounds in the octagon,” Joe said.

Nicole survived a dangerous infection and 105-degree fever, and the implant — a small electronic device that is like a magnet that connects to her head — allowed her to access sounds she had never heard before. It also did wonders for her speech, which she spent 10 years perfecting through speech therapy.

Nicole is an expert at reading lips. She taught herself and says, “It came natural to me.”

But she can have a conversation without reading lips — as long as she is wearing her cochlear implant and the hearing aid in her left ear.

“I can hear normal,” she said.

In the classroom, her teachers use an FM system, which gives them a microphone to wear that feeds the audio directly into her implant. It was a “game changer,” because it meant that Nicole no longer had to sit at the front of the class in order to hear her teachers or try to read their lips. She just has to remember to take it with her to each class or she will start hearing the subject being taught from her previous class.

On the volleyball court, especially in loud situations, Nicole communicates with her teammates through hand signals. Despite being only 5-6, and often facing much taller opponents at the net, Nicole ranks third in kills for a Prestonwood team that is 31-5. She also plays high-level club volleyball.

“She is an amazing volleyball player,” said Prestonwood sophomore outside hitter Mikala Young, who started playing volleyball with Nicole when she was 12. “She has the hops for it. She might be small, she might be 5-6, but she gets so many kills, and we’re going up against 18-year-olds all the time. I just love how she has the personality to hit it as hard as she can. She doesn’t just tip it because she’s short. She hits the ball and gets massive kills like a 6-3 girl would.”

Nicole has been mainstreamed since she began school and has always been a good athlete, playing soccer, basketball, softball and even on a boys baseball team growing up. She is a typical teenager who enjoys hanging out with friends, working out and listening to music — rap, country and romantic songs are her music of choice.

“Nicole has the sweetest personality,” said Prestonwood sophomore Jadyn Livings, who ranks among the area leaders in kills with 442 (4.5 per set). “I have never seen her down. She is always smiling, always giving her best for the team.”

In 2019, while playing in Round Rock, a game official who was hearing impaired noticed her implant and hearing aid. It just so happened that the official was childhood friends with Lynn Boren, the coach of the USA Deaf Women’s Volleyball team.

That led to Nicole becoming the youngest player to ever join the program, which includes players in their 20s. Many of the players on the team rely solely on sign language, and Nicole thinks it can help her learn another form of communication.

“I’m excited to play with girls that are like me, and I’m proud to honor the USA,” she said. “Playing with older girls is kind of intimidating, but they’re all super nice, and I get to learn sign language with them.”

Sign language could be helpful at the Deaflympics. Athletes won’t be allowed to wear any hearing devices during competition, the first time that Nicole has had to go without those.

Mitchell, who won seven state titles in nine years as the coach at Lovejoy before taking over as Prestonwood’s coach this season, thinks Nicole could have a future in volleyball beyond high school.

“If that kid wants to play, she’ll have opportunities to play in college,” he said. “She is an undersized outside hitter as far as her height, but she is fiery, aggressive and jumps as high as a lot of these kids that are 3, 4, 5 inches taller than her.

“She is doing everything that everybody else is. I don’t think she views [being deaf] as a hindrance. It’s just life for her.” 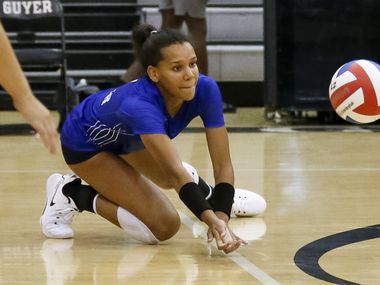 6A Region I is primed to produce another volleyball state champ, and there are surprising candidates

To view subscription options for The News and SportsDay, click here.