TABC says they didn’t follow rules put in place to slow the spread of COVID-19.

Both establishments will be prohibited from selling alcoholic beverages for 30 days.

At Ampersand on Bledsoe Street in Fort Worth, TABC documents say that operators were not enforcing social distancing and staff and customers were not wearing masks.

Ampersand’s owners deny the claim, saying temperature checks and masks are required for employees and customers, and tables are spaced six feet apart. The owners say in a statement that TABC agents might have cited the bar after seeing a customer walk to the restroom without a mask.

“We will use this experience to improve our operations further as we navigate through the current challenges our industry and world are facing,” reads a statement from Ampersand’s owners.

The Whippersnapper on Henderson Avenue in Dallas was cited simply for being open, which violates current rules in Dallas County. Despite an order from Gov. Greg Abbott that allows county judges to reopen bars, Dallas County Judge Clay Jenkins has not sought to do so. Judges in Collin, Denton and Tarrant counties have reopened bars since the order took effect on Oct 14.

If The Whippersnapper’s owners had secured a food-and-beverage certificate, it could have been reclassified as a restaurant and been allowed to reopen, mid-pandemic. But according to TABC records, The Whip doesn’t have that certificate and hasn’t applied for one. Co-owner Brandon Hays says he mistakenly thought The Whip’s food-and-beverage certificate application was sent in when he hired an outside firm to secure one for one of his other bars, High Fives.

“It was an oversight on my end,” Hays says. “[The outside firm] only applied for one certificate, and I didn’t follow up on that. ... We pride ourselves in doing things the right way. We simply didn’t have the certificate filed. Things were moving so fast."

Bars that have successfully gotten a food and beverage certificate — and nearly 2,000 in Texas have — are required to sell a higher percentage of food than alcohol, according to TABC rules. Dozens of bars in Dallas have received this reclassification and remain open during the pandemic.

The Whip’s co-owners got their hands slapped for being open on Oct. 17 and received a written warning from the TABC. The bar was cited for the same violation on Oct. 18, triggering the suspension.

A permit suspension does not mean the establishment in violation necessarily needs to close. Ampersand will continue to sell coffee and will temporarily suspend its alcohol sales. Ampersand’s owners also operate a second bar on University Drive in Fort Worth, and its liquor license is unaffected.

The Whip will close for now, and Hays says they plan to apply for a food-and-beverage certificate. If or when they receive it, the bar can reopen and begin operating like a restaurant.

The Whippersnapper’s co-owners were among eight bar owners who sued Gov. Abbott in Dallas County court over the summer, saying that they were “singled out" in the statewide closure of bars. The suit will be dismissed, according to attorney Jason Friedman; none of the bar owners he represented received the $1 million in relief they requested. They’re giving up the suit because “it has achieved its purpose,” Friedman says.

“They believe it paved the way for bars to be allowed to be open.” 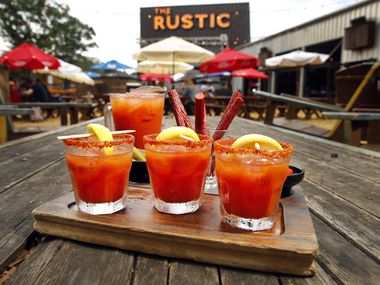 Tarrant County judge agrees to open bars, but warns of closures if 'flagrant violations’ are found

Four other businesses, based in Houston, were caught in violation by the TABC: Lux Lounge, Sol Billares, The Standard and Spire.

The TABC has issued 68 violations to bars in Dallas, Collin, Denton and Tarrant counties since June 26, when bars were ordered to close. A majority of those violations were written warnings and did not result in license suspensions. Four bars in Dallas-Fort Worth had their licenses suspended in June.

After a bar is given a 30-day liquor license suspension, those who are caught violating executive orders further could be hit with a 60-day suspension.

According to the TABC, its agents inspected 1,344 businesses in the past week and more than 20,000 since May. “A large majority of business owners are showing their commitment to keeping customers and employees safe, and we’re grateful for all of their hard work," TABC Chairman Kevin Lilly says in a statement.

By Wire Services and Tom Steele
In This Story
Hide