Acts of harassment spiked at the start of the pandemic and have swelled in number in recent months. Activists and organizations hope to turn the tide by working with politicians and law enforcement, and engaging in outreach and charity.

Many in the Asian American and Pacific Islander community were caught off guard last year by the alarming increase in anti-Asian hate incidents reported during the onset of the coronavirus pandemic.

Now, more than 18 months into the pandemic, activists in Dallas-Fort Worth’s AAPI community said they are poised to continue fighting against acts of anti-Asian hate, which data indicates have continued to swell in number.

To battle hate-fueled incidents and violence against Asian Americans and Pacific Islanders, activists and organization leaders said they will continue working with elected officials, law enforcement and other communities of color to foster tolerance and understanding. Some also expressed a desire to engage the broader Dallas-Fort Worth community through outreach and charity efforts.

Stop AAPI Hate, a California-based watchdog group that tracks hate incidents against Asian Americans and Pacific Islanders in the U.S., received 103 reports of such incidents in Texas from March 2020 through the end of February. From March through June of this year, though, Stop AAPI Hate was notified of 228 more anti-Asian incidents in Texas, according to an Aug. 12 report.

Since March 19, 2020, the organization has documented more than 9,000 hate incidents from across the country.

Verbal harassment made up a significant portion of Texas incidents reported to the organization. The two most common settings for anti-Asian hate, according to information submitted by respondents in the state, were public streets and businesses.

Texas had the nation’s fourth-highest number of hate incidents since March 2020 reported to Stop AAPI Hate, which said it received reports from all major Texas cities, including Dallas-Fort Worth, Houston, Austin and San Antonio. Forty-one incidents were reported out of Dallas-Fort Worth, according to the organization.

Testifying before a U.S. Senate committee in early August, Brian Levin, director for the Center for the Study of Hate and Extremism at California State University in San Bernardino, said a survey that the center conducted of major U.S. metropolitan police departments showed a 189% increase in anti-Asian hate crimes in the first quarter of 2021 compared with the same period last year.

While the number of reported incidents most likely doesn’t paint the whole picture, as many occurrences go unreported, the data shows that anti-Asian hate persists a year and a half into the pandemic. 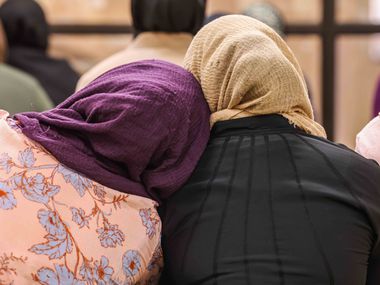 For Muslims across North Texas, 9/11 set off a wave of Islamophobia that has endured to this day

Hate against the Asian American community caught the attention of mainstream media and politicians in March, when 22-year-old Robert Aaron Long killed eight people, including six Asian women, in three shootings in the Atlanta area.

In July, Long pleaded guilty to murder in four of the slayings and was sentenced to four consecutive life sentences. He still faces the death penalty in the other deaths.

Averie Bishop, 25, is an American of Filipino descent who for the last six years has been an activist with a focus on issues affecting the AAPI community in the Dallas area. She was recently appointed to a new advisory council announced by Mayor Eric Johnson to battle hate crimes in the city.

Bishop said she thinks many who are in the Asian community are often hesitant to speak up or report hate-related incidents because of false expectations imposed by the “model minority myth,” a fabricated narrative created in the 1960s that asserts that people of Asian descent are all smart and successful, have overcome racism, and do not speak up against injustices. 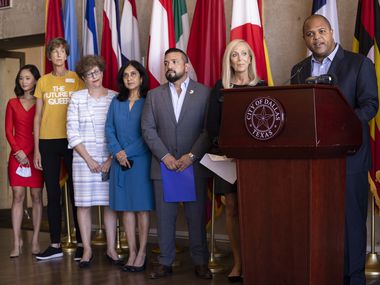 ‘Strength is in numbers.’ How a new Dallas group plans to combat rise in hate crimes

“I want to make sure that the co-chairs and mayor to know that my community is often left behind and our voices are not heard because we typically do not speak up,” she said.

In Texas, state Rep. Gene Wu, D-Houston, wrote a resolution during the recent regular session condemning anti-Asian hate. The resolution, which received bipartisan support and passed in the House, was not picked up by a Senate committee.

Wu said the increase in incidents is a reminder of why it’s important for victims to report their experiences.

“The surge of anti-Asian hate since the beginning of the pandemic is the culmination of deep-rooted, historical anti-Asian racism in the United States,” Wu said in a prepared statement. “This hatred has resulted in targeted violence in multiple instances, and is reflected in the dramatic rise in reported incidents of Asian hate this last year.”

‘Far from being the enemy’

Jan Xie, president of Asian Culture And Education Society USA, said multiple members of her North Texas-based group, which has worked throughout the pandemic to provide personal protective equipment around Dallas-Fort Worth, have told her that they’d been accosted in public and unfairly blamed for the pandemic.

Xie, who lives in Dallas, said it’s disheartening that Asian Americans continue to be the targets of coronavirus-related hate incidents.

“Far from being the enemy, Asian Americans have actually been on the front lines, with many Asian American health care workers involved in caring for their fellow Texans,” Xie said in a prepared statement. “I am so sad that we are the ones to be blamed for the cause of COVID-19. We ask that the people please don’t stand by in silence; silence is complicity.”

According to Stop AAPI Hate, Chinese and Korean Americans were the most and second-most represented in self-reported hate incidents.

The Dallas-Fort Worth area has the second-largest Chinese population in Texas, behind Houston, and is home to the state’s largest Korean population, according to AAPI Data, an organization that tracks demographic information related to Asian Americans, Native Hawaiians and Pacific Islanders.

McKinney resident James Huang, 43, who grew up in New York, said he was often exposed to racist verbal abuse and harassment directed at him.

Huang said he thinks anti-Asian racism has always existed, but that the sentiments were magnified by former President Donald Trump and other politicians who openly used hateful rhetoric to blame the coronavirus pandemic on China.

He said an effective way to combat hate is for members of the Asian American and Pacific Islander communities to become more engaged in the community.

“We should encourage our second generation to run for office and to become civil servants,” Huang said. “Another way, which I think is more of a long-term goal, is using our community as a whole to really make a difference.”

Huang helped launch a campaign in partnership with the North Texas Food Bank called the Nihao Movement. He said one goal of the partnership was to get more Americans of Chinese descent in North Texas involved in their local communities, whether that comes in the form of volunteer work, civil service or other means.

“It doesn’t matter what you do, just go out there. You’ll learn so much from the community. I bet there are a lot a ways to combat anti-Asian hate that we don’t even know about yet,” Huang said.

Dr. Sunhee Hong, a dentist based in the Dallas-area, is of Korean descent. She also serves as the chairwoman of the D-FW chapter of the Korean American Coalition.

She recalled a 2019 incident in New York City, during a visit to a relative before the pandemic, in which she was struck in the face at a subway station.

“I was just afraid of people. When I walked in the street, I didn’t know if someone was going to attack me without any reason,” Hong said. “The most scary thing about when I was attacked was that the man just walked very slowly and pretended like nothing happened. People just stared at me and at him, and didn’t do anything.”

Hong said she thinks a lack of education is a major reason for the spread of anti-Asian hate during the pandemic. Community leaders should speak to those around them to advocate against hate toward people of Asian descent, Hong said.

“We are all human beings. We need to try to understand and unite behind coming up with some idea or plan on how to overcome this difficult situation,” Hong said in reference to the pandemic. “Hating is not the answer.”

Plano resident Sammy Yang, 65, who is of Chinese descent and immigrated to the U.S. in 1984, is president of the Dallas-Fort Worth Asian-American Citizens Council. He said he has felt a rise in hate against Asian Americans in recent years.

“It’s intangible, but I can feel it. Instead of love, nowadays it feels like there is more hate,” he said.

In addition to working with local law enforcement agencies, Yang said, fostering conversations with other communities of color and communicating concerns to elected officials is central to fighting back against anti-Asian hate.

“When something like this happens, that means there is a disconnect somewhere, so we need to keep the dialogue open,” he said.