By early November, the Pfizer vaccine for kids will likely be at pediatrician’s offices, pharmacies and possibly schools

Update: This story has been updated with comments from public health experts.

The Pfizer COVID-19 vaccine will likely be available for the nation’s 28 million children ages 5 to 11 by early November, with smaller needles and a dose that is about one-third of an adult’s dose. The White House said Wednesday that families will be able to get the shot at pediatricians’ offices, pharmacies and possibly schools. Here’s what to know about the children’s vaccine.

What needs to happen before the vaccine is rolled out for kids?

The U.S. Food and Drug Administration advisory panel is scheduled to discuss the safety and benefits of the Pfizer vaccine for young kids on Oct. 26. The FDA typically makes a decision on whether to authorize emergency use a few days after the advisory panel sets out its recommendations. The Centers for Disease Control and Prevention is scheduled to discuss the issue on Nov. 2 and 3. The shot could become available for kids soon after that. With a regular dosing schedule, children could be fully vaccinated by Christmas.

To help states and cities prepare, the CDC recently sent out a seven-page document with guidance on how to set up expanded vaccination programs, the Associated Press reported. For example, it notes pharmacies in every state can give COVID shots to children, but it clarifies that only doses prepared and packaged specifically for children are to be used for those under 12.

What do researchers say about COVID risks for young kids?

While children run a lower risk than older people of getting seriously ill from COVID, at least 708 young people in the U.S. have died from the virus, most of them ages 5 to 18, according to the CDC. Six million U.S. children have been infected, 1 million of them since early September amid the spread of the more contagious delta variant, the American Academy of Pediatrics says.

“Children are still becoming infected because we have not implemented safety protocols adequately or equitably throughout the country,” Cecilia Tomori, the director of global public health and community health at Johns Hopkins School of Nursing, told The Dallas Morning News. “Vaccination is the best protection that the children themselves will have.”

Health officials believe that expanding the vaccine drive will not only curb the alarming number of infections in children but also reduce the spread to vulnerable adults.

Erin Carlson, the director of graduate public health programs at the University of Texas at Arlington, told The News that children can transmit the virus to other members of their household, including their caregivers. And that can have tragic consequences: A recent study published in the journal Pediatrics reported that more than 140,000 U.S. children, or about 1 in 500 children, have lost a caregiver during the pandemic.

“It’s very important to slow that chain of transmission by getting [kids] vaccinated,” Carlson said.

Vaccinating children could also help schools stay open and kids get back on track academically, and contribute to the nation’s recovery from the pandemic, the Associated Press reported.

What do researchers know about the benefits of Pfizer’s vaccine for kids?

For children ages 5 to 11, Pfizer tested a lower dose — a third of the amount that’s in current shots. After a second dose, the young kids developed antibody levels as strong as those in teens and young adults, Dr. Bill Gruber, a Pfizer senior vice president and pediatrician, told the Associated Press.

Pfizer studied the lower dose in 2,268 children in kindergarten and elementary school. The Pfizer study, which came in a press release and not a peer-reviewed scientific publication, is ongoing. There haven’t been enough COVID cases to compare rates between the vaccinated and those given a placebo, the Associated Press reported.

The trial was not big enough to conclude whether the vaccine prevents COVID or hospitalization in the young age group, according to reporting by Apoorva Mandavilli of The New York Times. Rather, Pfizer studied the children’s immune response and found similar antibody levels as in older age groups.

For a slightly older age group — teenagers — there have been positive results, researchers said. On Tuesday, the CDC reported that the Pfizer vaccine was 93% effective against hospitalization for COVID among 12- to 18-year-olds, The New York Times reported.

What do doctors say about the safety of the vaccine for kids?

Dr. James Cutrell, an associate professor of medicine in the division of infectious diseases at UT Southwestern, said during a Dallas Morning News virtual event, that the vaccine appears to be quite effective in kids but that the FDA advisory panel will be looking closely at the safety of the vaccine.

At the urging of federal regulators, Pfizer and Moderna are expanding the size of their clinical trials for children ages 5 to 11 — a precautionary measure designed to detect rare side effects including heart inflammation problems that turned up in vaccinated people younger than 30, The New York Times reported.

Researchers estimated that for every million vaccinated boys ages 12 to 17 in the U.S., the shots might cause a maximum of 70 myocarditis cases, but they would prevent 5,700 infections, 215 hospitalizations and two deaths. Studies have also shown that the risk of heart problems after COVID is much higher than after vaccination, according to reporting by Apoorva Mandavilli of The New York Times.

How will the Pfizer vaccine be administered to kids?

The Associated Press reported that more than 25,000 pediatricians and primary care providers have already signed on to administer COVID vaccine shots to kids. That is in addition to the tens of thousands of pharmacies that are already administering shots to adults. Hundreds of school- and community-based clinics will also be funded and supported by the Federal Emergency Management Agency to help speed putting shots into arms.

Carlson said that information and the vaccines need to be delivered in ways that parents trust. She described local pharmacies and pediatricians’ offices as “places we know, we’ve been [to], we trust, we feel comfortable going, and we feel comfortable asking questions.”

The CDC discussed the option of vaccination clinics at schools, but stopped short of endorsing that as a primary way to get kids vaccinated, the AP reported. The guidance also warns health care providers to only use doses that have been prepared especially for kids, and not try to fraction adult doses.

It’s not clear yet how school clinics may play a role in the vaccine rollout, but public health experts say that these efforts will be important.

“Many people don’t actually see health care providers regularly,” Tomori said. “So the community-based approach and the school-based approach [are] a much more effective way and much more equitable way of getting vaccination to people.”

Tomori added that the expanded eligibility for children could help with mobilizing vaccinations among adolescents. “This would be a great opportunity to do outreach to families and communities,” she said.

Will there be enough shots?

There should be more than enough. The U.S. has bought 65 million doses of the Pfizer pediatric shot — expected to be one-third the dosage for adults and adolescents — according to officials. They will ship in smaller packages of about 100 doses each, so that more providers can deliver them, and they can be stored for up to 10 weeks at standard refrigeration temperatures, the Associated Press reported.

The Associated Press contributed to this report. 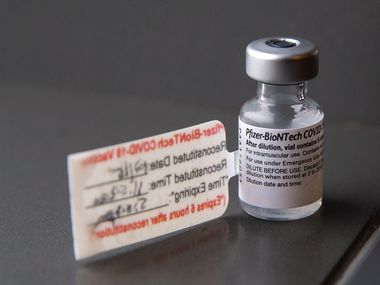 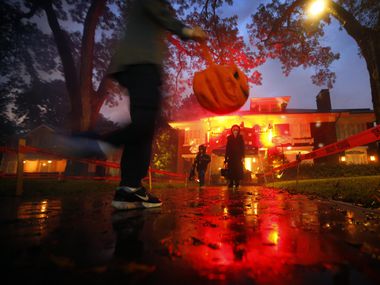 Health experts weigh in on COVID-19 in D-FW, kids’ vaccines and more

They say that trick-or-treating is fine this Halloween, with some precautions.
By DallasNews.com Staff
Connect with needs and opportunities from Get immediate access to organizations and people in the DFW area that need your help or can provide help during the Coronavirus crisis.
I need help I can help

Alejandra Canales, Special contributor. Alejandra Canales is a freelance science reporter for The Dallas Morning News and a graduate student in neuroscience at the University of Wisconsin-Madison. In summer 2021, she covered science for The News as part of a fellowship through the American Association for the Advancement of Science.