Feds say Stewart Rhodes’ Oath Keepers practiced for war before the storming of the U.S. Capitol

Rhodes, 56, leader of the Oath Keepers extremist militia, pleaded not guilty Friday to seditious conspiracy and is expected back in court next week for a hearing on whether he should remain detained pending trial.

PLANO — The government claims that Oath Keepers leader Stewart Rhodes and others indicted for sedition this week in connection with the Jan. 6 attack on the U.S. Capitol had planned and practiced for “unconventional warfare” with “road blocks… convoy operations… hasty ambushes” in the weeks after the November 2020 presidential election.

Stewart Rhodes, 56, leader of the Oath Keepers extremist militia, appeared in court on Friday afternoon after the government alleged he led a coordinated attack on the U.S. Capitol. He pleaded not guilty to several charges including seditious conspiracy — the most serious to date in connection with the insurrection.

Rhodes is scheduled to return to the Plano federal courthouse on Thursday for a detention hearing. Government prosecutors are expected to argue that he’s a danger to the community and a flight risk and should be locked up pending trial.

Rhodes is not accused of entering the Capitol building on Jan. 6. But prosecutors say he organized a conspiracy to keep Joe Biden out of the White House using an armed force of militia volunteers, both before and after the violent siege at the Capitol.

Seditious conspiracy carries a penalty of up to 20 years in prison. This is the first time that charge has been used in connection with the D.C. attack led by supporters of former President Donald Trump.

Several other Oath Keepers members or associates have also been charged in connection with the Capitol attack. The group played a prominent role in the uprising, the FBI says. Its members were shown in videos marching through the mob toward the Capitol in tactical gear during the riot.

Several members are said to be cooperating with federal investigators, who obtained a trove of encrypted messages between Rhodes and his compatriots, allegedly detailing the scope of the plot.

Rhodes, a Montana native, moved to Granbury at least a year ago, his lawyers said after Friday’s brief hearing. They said they didn’t know why he moved to Texas.

Wearing a T-shirt, jeans and boots, Rhodes answered a few brief questions from U.S. Magistrate Judge Kimberly Priest Johnson before shuffling back out of the courtroom in leg and wrist chains.

His lawyers, Phillip Linder and James Lee Bright, told reporters after the hearing that Rhodes has no criminal history and doesn’t even have a passport.

“He has no reason to flee,” Linder said. “He intends to fight the charges.”

Linder and Bright said they intend to put witnesses on the stand next week to testify on Rhodes’ behalf, to prove he’s not dangerous and doesn’t intend on going anywhere.

“They’ve known where he’s been for a year,” Bright said. “It’s not like he can slide under the radar.”

While not a household name, Rhodes is very well known to those who study extremism in the U.S.

Experts in that area say Rhodes’ deeply paranoid and conspiratorial rhetoric has been fueling unrest within far-right individuals and groups. More troubling, a recent hack of the Oath Keepers’ membership records indicate that an alarmingly high number of law enforcement officers had joined the militia, according to published reports.

USA Today reported in October that one of those enlistees, a Collin County constable, signed up in 2012 while running for office. The constable told the newspaper he did so to help his campaign and hasn’t associated with the group since being elected.

The Southern Poverty Law Center has said Rhodes has been busy peddling “fringe right-wing conspiracy theories” for some time.

The Anti-Defamation League called his Oath Keepers militia “one of the largest anti‐government extremist groups in the U.S.”

The Combating Terrorism Center at West Point published a December study on the Oath Keepers and their role in the Jan. 6 insurrection that characterized the group as “deeply conspiratorial.”

The Oath Keepers, the study said, push for the “violent replacement of tyrannical forces” in the U.S. to stop what members believe is an “imminent conflict with the federal government.” Rhodes and his followers view the government as posing a “tyrannical threat” to “control the population,” the study said.

Rhodes, a former U.S. Army paratrooper and Yale Law School graduate who founded the Oath Keepers in 2009, has not kept a low profile since the Capitol siege. He has also surfaced in Texas to rail against immigrants and the government.

He predicted his arrest during a March 2021 border appearance in Laredo for an event titled, “We the People For Border Security.” Rhodes was quoted at the event as saying he “may go to jail soon” for “made-up crimes.”

He also claimed that China caused Trump’s election loss and is using Biden as a puppet leader, according to the SPLC.

Even before the November 2020 election, Rhodes was active in traveling the country to speak out about perceived threats.

He was in Dallas in 2020 to protest COVID-19 restrictions. And his Oath Keepers provided unauthorized security for Trump supporters when the former president spoke in Dallas in 2019.

Rhodes told The Dallas Morning News at the time that he was coordinating his volunteers, some of them licensed to carry weapons, to protect Trump supporters from far-left violent extremists outside American Airlines Center.

“We’re the right-wing version of the ACLU. I’m not an anarchist,” Rhodes said in an interview.

Rhodes also surfaced in Dallas back in 2016. Right Wing Watch reported that he used the deadly ambush killing of five police officers in downtown Dallas by a lone gunman following a protest as an opportunity to “reestablish the militia system.”

Rhodes was arrested by the FBI on Thursday at a Little Elm house that agents searched with a warrant. The homeowner, when reached by phone Friday, said he had been renting out a room to Rhodes and didn’t know much about him.

He declined to answer further questions.

The indictment against Rhodes and 10 others details alleged extensive planning by Rhodes and his Oath Keepers, beginning shortly after the November 2020 presidential election.

There was “unconventional warfare” training. And training for “road blocks… convoy operations… hasty ambushes” and falling into formations. One Oath Keeper said he had traveled to Washington, D.C., for a lengthy reconnaissance trip.

“This is the moment we signed up for,” another Oath Keeper said in a November 2020 planning meeting.

A Comfort Inn in Arlington, Va., was chosen as the base of operations for the heavily armed quick-response teams that Rhodes arranged to prepare to supply arms to the insurgents at the Capitol, the indictment says.

When the new year arrived, Rhodes was allegedly spending thousands of dollars on weaponry, such as a shotgun, scope, magazines, sights and bipod.

Meanwhile, other Oath Keepers were looking for volunteers who could provide boats for a crossing of the Potomac with “heavy weapons” to supply the “ground teams” at the Capitol.

The Oath Keepers converged on the Capitol, some accompanied by an 82-pound German Shepherd, others speeding to the location in a golf cart. All were outfitted in tactical gear as if ready for war, authorities said.

While police repelled the Oath Keepers’ advance on the Senate Chamber, another group headed toward the House of Representatives in search of Speaker Nancy Pelosi, the indictment said.

Timeline laid out in the indictment

The indictment alleges the following series of events:

11/5/2020: Two days after the presidential election, Stewart Rhodes messages his Oath Keepers volunteers, telling them: “We aren’t getting through this without a civil war… prepare your mind, body, spirit.”

12/19/2020: Roberto Minuta, 37, an Oath Keepers member from Prosper who is charged in the indictment, says in a message to a comrade: “Oath Keepers president is pretty disheartened. He feels like it’s go time. The time for peaceful protest is over in his eyes. I was talking with him last night.”

12/22/2020: Rhodes tells a regional Oath Keepers leader that if Joe Biden assumes the presidency, the militia would have to launch a “massively bloody revolution.”

1/2/2021: An Oath Keepers quick response leader says in a message: “My sources DC working on procuring boat transportation as we speak.”

1/5/2021: The Oath Keepers conduct a recon trip to the Capitol from a Comfort Inn in Virginia, their base of operations.

1/6/2021: Rhodes at 6:27 a.m. informs other Oath Keepers on a chat about the quick response teams that are to be staged outside of the city for support. About two hours later, Rhodes and other Oath Keepers leave their Virginia hotel for the Capitol area that will later be besieged by his followers and thousands of other Trump supporters.

1/10/2021: Rhodes begins a four-day spending spree on firearms equipment, paying more than $17,000 on gear such as magazines, rifle scopes and gun cases.

1/20/2021: An Oath Keepers member messages a comrade to say, “After this…if nothing happens…it’s war…Civil War 2.0.” The feds say Rhodes messages other Oath Keepers “around this time” to “organize local militias to oppose President Biden’s administration.” 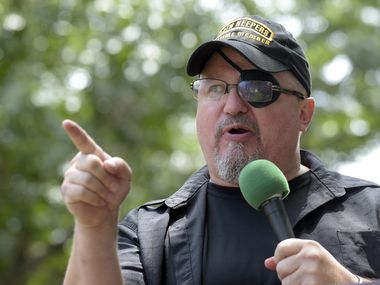 A Granbury man, Stewart Rhodes, the founder and leader of the far-right Oath Keepers militia group, has been arrested and charged with seditious conspiracy in the attack on the U.S. Capitol, authorities said Thursday.
By Kevin Krause 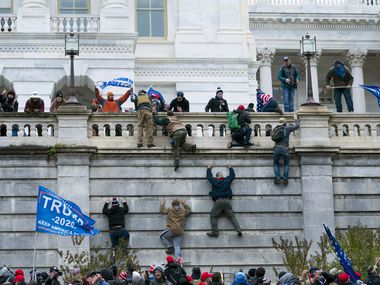 These North Texans have been charged in connection with the Jan. 6, 2021 Capitol insurrection