2 McAllen police officers shot and killed while on duty

58 staffers at a Walmart fulfillment center in Fort Worth have tested positive for COVID-19, worker tells OSHA

3 youths in custody, another at large after fatal shooting of woman at Duncanville apartment

Cornelius Lydell Broadway and Jeromey Lemar Young Jr., both 17, and a juvenile female have been arrested on capital murder charges.

Three youths are in custody and a fourth suspect remains at large in connection with the fatal shooting of a woman at a Duncanville apartment complex two months ago, police say.

Broadway was already being held at the Dallas County jail on unrelated charges of aggravated assault with a deadly weapon and evading arrest. He remained in custody Monday, with bail set at $575,000.

Duncanville police arrested Young on Wednesday. He was being held Monday at the Dallas County jail on one count of capital murder, with bail set at $500,000. 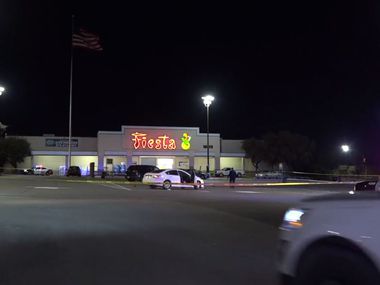 Police also took a juvenile female into custody Saturday on a capital murder charge. Her name was not released because of her age, and she remains in juvenile detention.

Authorities have obtained a capital murder warrant for a fourth suspect, a juvenile, who is still at large.

Anyone with information about the case is asked to call Detective Bert Pudgurney at 972-780-4911.

2 McAllen police officers shot and killed while on duty

What does a whistleblower who handled insurance claims for USAA admit under oath?

What they’re saying about Dak Prescott: Patrick Mahomes’ blockbuster deal is a ‘huge win’ for the Cowboys QB