The 28-year-old was fatally shot last week on the highway in Oak Cliff.

The 28-year-old rapper, whose legal name was Melvin Noble, was driving north on Interstate 35E just before noon Nov. 11 when he stopped between Illinois Avenue and Clarendon Drive.

A man in a black car, possibly a 2014-15 Chevy Camaro, also stopped and approached Noble’s vehicle. He was carrying a rifle.

Noble got out of his vehicle and tried to run but was shot multiple times. He was taken to a hospital, where he died. A second person was wounded.

The gunman then drove north on the interstate in the black car, police said.

The images released by police this week show a man in a ski mask wearing a dark shirt and light-colored pants. 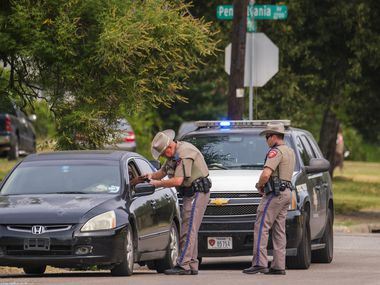 This joint operation with DPD will have troopers who are non-uniform and will not be a part of field operations such as patrol. It is unclear how many troopers will be involved.
By Cassandra Jaramillo

Authorities have said they did not know the gunman’s motive but called the shooting “brazen.”

“You think of the location and all the people who could be standing around or the other innocent people who could have been seriously injured,” said Sgt. Warren Mitchell, a police spokesman.

Anyone with information about the shooting may contact Detective Chris Anderson at 214-671-3616 or c.anderson@dallascityhall.com and refer to case No. 201916-2020.

Crime Stoppers is offering a reward of up to $5,000 for information that leads to an arrest and indictment in this case. To make an anonymous tip, call 214-373-8477.