A man accused of murdering his ex-girlfriend’s father in Celina and three men in Dallas had a record of domestic violence years before the slayings, court and police records show.

In each of the three Dallas slayings, Jeremy Harris, 31, is accused of firing from a car window and driving off as the victim died. Police have said the three men — 19-year-old Robert “Jaden” Urrea, 36-year-old Adam Gautreau, and 57-year-old Kenneth Jerome Hamilton — were targeted at random.

A police spokeswoman did not respond to questions about whether investigators had found a motive for the killing spree.

Harris was arrested and charged after his ex-girlfriend’s father, 60-year-old Blair Carter, was found fatally shot inside a burning home in Celina.

Police wrote in an arrest warrant affidavit obtained by The Dallas Morning News that witnesses reported hearing gunshots and seeing a man dressed in black run from the home with a backpack.

Authorities conducted surveillance on Harris in Red Oak, where they found his black Chevrolet SUV. The same vehicle had been recorded on surveillance footage about the time of Carter’s slaying.

Police watched Harris place containers that smelled of gasoline in the trash, the affidavit says. When they searched his home, they found ammunition and recent firearms receipts, along with clothes that matched those seen in surveillance footage, according to the affidavit.

Investigators also obtained security footage from Carter’s cellphone that showed Harris trying to get inside the back door of his home about 11 a.m. the day of the slaying, shortly before police were called about a fire. 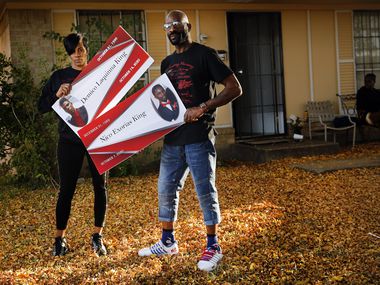 Family grapples with slayings of 2 brothers as Dallas deals with increased crime, soars past 200 homicides

By Nataly Keomoungkhoun and Tom Steele

Harris was taken to the Texas Department of Public Safety’s Waxahachie office for an interview, where he denied being involved in the crime and asked for a lawyer, police wrote in the affidavit.

Harris’ attorney, Kenneth Weatherspoon, said in a text message that he wasn’t ready to comment on his client’s cases.

Harris remained in the Collin County jail Wednesday, facing four counts of murder, with bail set at $1 million on each charge.

Police records show Harris had a history of violence against the Celina victim’s daughter.

In August 2014, the woman told police Harris had gone through her telephone while she was sleeping at the Frisco home they shared and saw something that upset him, then slapped her until she woke up.

He went outside and she locked the door behind him, but he kicked in the home’s front door and followed her to her bedroom and kicked in that door as well, according to a police report.

The woman told officers that a week earlier Harris had grabbed her by the neck and squeezed until she couldn’t breathe, letting go only when she was about to lose consciousness, the report says.

The woman obtained a protective order against Harris, but in February 2016 she returned home from work one afternoon and found that her rental car was missing from her driveway and that someone appeared to have rummaged through her closet, police wrote in an affidavit. A day and a half later, an “agitated” Harris was arrested outside a Walmart in Frisco on a criminal trespass charge, according to an incident report. He had the woman’s car keys in his pocket, police said.

Another family-violence assault charge after a July 2017 incident led authorities to move to revoke Harris’ probation. Details about that case were not available, but Harris turned himself in to police that November and pleaded guilty in February 2018.

He was sentenced to two and a half years in prison on the new charge, and state records show he was released from custody in May.

Police said Harris is suspected in the slaying of Urrea, an SMU student who was gunned down in downtown Dallas around 3 a.m. on Halloween.

Urrea had just called a ride-hailing service when a driver in a white Ford Taurus appeared to summon him to the passenger side of the car and shot him, then sped off. Police later confirmed the Ford belonged to Harris’ girlfriend. 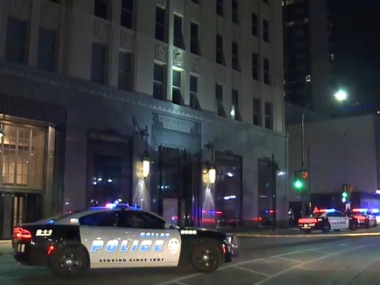 Two weeks later, Gautreau and Hamilton were fatally shot within an hour of each other.

Gautreau was shot repeatedly by someone in a black Chevrolet Tahoe on the northbound service road of Interstate 35 near Empire Central about 8:30 p.m. Nov. 14.

Hamilton was shot at a red light in east Oak Cliff about 40 minutes later.

Authorities are investigating whether Harris is connected to a shooting in Dallas on Nov. 16 as well as three separate shootings the following day in Frisco, Denton and Prosper.

Dallas police officials said he may have been the shooter in an aggravated assault in the 6000 block of East Grand Avenue around 12:40 a.m. Nov. 16. No other details about that case have been released.

In the Frisco case, a 41-year-old man was shot about 9:50 p.m. Nov. 17 near the intersection of Lebanon Road and Elmwood Drive, close to Hillcrest Road. The victim was taken to a hospital, and his injuries didn’t appear to be life-threatening, said Officer Grant Cottingham, a Frisco police spokesman.

Prosper police said Harris may be linked to a shooting that took place about 10 p.m. near Preston Road and First Street. The driver of a dark sedan fired at a white pickup, striking the driver in the arm or shoulder, police said. That investigation remains open and active, police said.

In Denton, police have said preliminary information suggests Harris may be a suspect in a random shooting about 10:30 p.m. Two 20-year-old women said were driving in the 2400 block of East University Drive when someone pulled next to them and fired several times into their car. Both women were taken to a hospital with non-life-threatening injuries.

Dana Branham, Breaking news reporter. Dana is a reporter at The Dallas Morning News covering crime and breaking news. She graduated in 2017 from the University of Oklahoma, where she studied journalism. Before coming to The News in 2018, Dana interned at the Cincinnati Enquirer and the Tulsa World.