Several people were fighting in the parking lot when Dai’trell Teal was shot, police said.

By Kelli Smith and Tom Steele

Updated at 3 p.m. June 24: Revised to include the victim’s identity.

The teenager who was fatally shot outside Arlington’s Hurricane Harbor water park was identified Thursday as a 16-year-old Arlington ISD student.

No arrests had been announced as authorities continued to piece together what led to the Wednesday evening slaying.

The Tarrant County medical examiner’s office said Dai’trell “Daidai” Teal was shot in the back.

He attended Martin High School in Arlington ISD and would have been a junior in the fall.

“With a heavy heart, the Arlington ISD reports that one of our students was shot and killed last night,” Superintendent Marcelo Cavazos said in a written statement Thursday.

The shooting happened about 7 p.m. Wednesday, closing time at the park near Interstate 30 and East Lamar Boulevard.

Cook said the officer was trying to break up the fight when he heard a gunshot and saw the victim.

All the people involved in the fight probably had been inside the park, Cook said. What led to the dispute had not been determined, and several people who were detained denied involvement, he said.

Police arrived at Hurricane Harbor quickly and closed off all exits to the park, Cook said. The off-duty officer saw some vehicles speeding away after the shooting.

Cook said officers stopped one vehicle that was trying to flee. The car was carrying several people — all believed to be teenagers — who witnesses said had been involved in the fight. Police were still working to confirm that.

“Witnesses see different things, and in the chaos — especially with the gunshot and apparently people were running — people see different vehicles, and so we have to determine if they’re involved,” Cook said. “We do have certain tests we can do to determine their involvement. If they’re not involved, then certainly they’ll be released.”

Six Flags Over Texas posted on Twitter that its “deepest sympathies are with the victim’s family.” Arlington-based Six Flags operates the Hurricane Harbor chain of water parks.

Cook said officers planned to examine any video that may have captured the shooting.

Kelli Smith, Breaking News Reporter. Kelli covers breaking news at The Dallas Morning News. She is a native of El Paso, Texas, and a recent graduate of the University of Notre Dame. Before joining staff, she reported for The Chicago Tribune and KTSM, the NBC affiliate in El Paso. 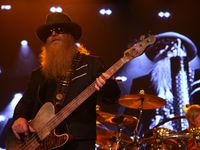