By Eva-Marie Ayala and Paul Cobler

Updated July 10: This story has been revised to reflect Texas schools joining an amicus brief filing in a lawsuit fighting the new guidance.

Jadha Gunawan doesn’t have any control over how his classes at Texas A&M University will be offered in the fall. Like most schools, it’s offering a mix of in-person and virtual courses to help stop the spread of COVID-19.

But because the two courses he’s set to take for his mechanical engineering master’s program are being offered online, he may not get to remain in the U.S.

A rule issued by Immigration and Customs Enforcement officials on Monday requires that those in the U.S. on a student visa must attend at least some of their classes in person. An all-virtual schedule could force the 24-year-old from Indonesia to leave the country.

And if classes start in-person but are suddenly moved online if a college closes because of the coronavirus pandemic -- which is what happened in March -- international students could also then be forced to leave.

That has students like Gunawan and university officials across the nation scrambling to adjust schedules, reconfigure offerings and laying out various backup plans to be able to pivot during unpredictable times.

“We need to make not only plan A, but plan B through Z,” Gunawan said. “This is a slap in the face for us. We already spend so much money just to go to school here. We’re already having to pay two to three times the normal tuition just to do this, and now that things are inconvenient, they’re just going to send all of us home.”

Already some schools are fighting back against the federal policy.

On Thursday, Harvard University, Northeastern University and the Massachusetts Institute of Technology filed a lawsuit against ICE and the Department of Homeland Security to prevent them from enforcing the new guidance. The agencies aren’t able to answer basic questions about how the policy will work, leaving students with many questions, according to a news release from MIT.

“Unspoken, but unmistakable, is one more question: ‘Am I welcome?’” said the release. “At MIT, the answer, unequivocally, is yes.”

On Friday, the University of North Texas, St. Edwards University and Trinity University were among 180 institutions that joined an amicus brief filing urging the courts to halt enforcement of the guidance.

Those on student visas traditionally can’t take all their courses online. But many schools are significantly limiting in-person classes because of the sharp rise in COVID-19 cases, including in Texas.

ICE’s new guidance -- which also requires foreign students to transfer to another school if all their courses are offered online only -- threw a wrench into months of planning just as colleges and universities began finalizing operating plans for the fall semester. 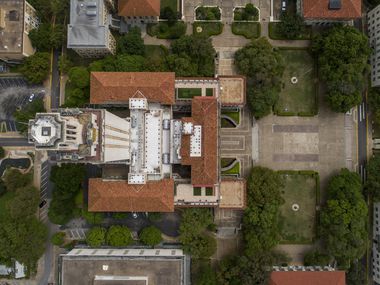 UT System plans for in-person, online classes and will require masks for the fall semester

Texas school officials say they are working to ensure international students are able to stay.

In a letter sent to students, Texas A&M’s International Student Services said it would work with them to ensure they’re taking at least one course in-person this fall in order to avoid deportation. The university also voiced uncertainty about the situation.

“While we do not have all the answers yet, we strongly support international students to attend the university this fall,” the letter reads.

Officials within the University of Texas System say they too are waiting further guidance on what is expected of them under the rules.

The University of Texas at Dallas will be among the hardest hit by the new rule. It ranks No. 12 nationally in having among the most international students enrolled with about 5,500 students from around the world -- mostly for graduate programs. Another 3,300 have completed degrees but are doing internships related to their studies.

Qiongdan Huang is finishing up research in circuit design as a third-year electrical engineering doctoral student at UT-Dallas. That’s all done in person, but she worries about what will happen if she can no longer come to campus if it’s shut down again.

Could she even get home to China? In March, many international students struggled to get home because of travel bans. Now, airlines have limited options, which has driven up the price of tickets, she said.

“It would be really, really hard,” she said. And how would she finish her degree? “Can I still finish my program or not? International students have already put a lot of effort in their programs. I feel like the emphasis isn’t on that but we’re being told, ‘OK, you don’t have to do that. Just pack and go home.’”

Juan Gonzalez, UT-Dallas’ dean of graduate education who also oversees the International Student Services Office, said university officials are working fast to ensure that each international student will have face-to-face interaction -- even if that means in limited, socially distant ways -- so they can remain in Texas.

“We’ve gotten a lot of calls already from students on what this means,” he said. “We’re doing our best to reassure them and advise them. ... Our main mission is to make sure students are continuing so they can finish their education and be safe.” 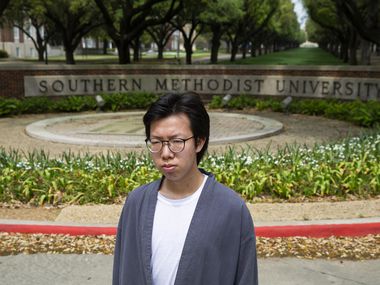 International students find themselves in a coronavirus limbo with uncertain futures

Under the new guidance, if schools offer a hybrid of in-person and online courses -- which many universities in Texas intend to do -- the institution must certify to federal officials that the program is not entirely online and that the student is taking the minimum number of online classes required to progress normally on a degree plan.

If a school is only offering virtual classes, an international student must either leave the country or transfer to a different school that does offer in-person courses.

If a school is operating under normal, in-person conditions, international students here on the F-1 visas can only enroll in one online course. Those students here for English language training programs or vocational degrees, generally on an M-1 visa, won’t be allowed to enroll in any online courses.

Universities were already bracing for a drop in international enrollment because embassies and consulates around the world shut down because of COVID-19, making it difficult to issue new student visas. Now the new guidance could give even more pause to those who were planning to start school in the U.S.

Lauren Jacobsen-Bridges, UNT’s director of international student and scholar services, said officials there are also working fast to ensure students’ courses will meet the federal requirements. But she added that the university is also working to help foreign students who can’t make it to Denton.

“We know there’s just a lot of uncertainty right now,” she said. “So we’re working with different departments to expand our online opportunities so that if our students have to begin their classes while still abroad, they can do so and then join us the next year.” 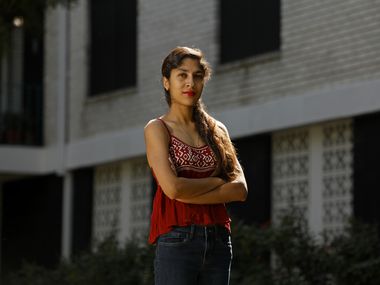 Turning away talent: Foreign students who want to work in U.S. must navigate complex visa system

Eva-Marie Ayala. Eva-Marie Ayala is a veteran education reporter focusing on how local and state policies impact school children. Previously, she reported for her hometown paper the Fort Worth Star-Telegram. She is a national board member for the Education Writers Association.

Paul Cobler, Politics Reporting Fellow. Paul Cobler covers politics for The Dallas Morning News in Washington, DC. Paul is a recent graduate of the University of Texas at Austin with a degree in journalism. While there, he worked at the school's student newspaper, The Daily Texan, and interned for newspapers across the state.