The school board voted last night to change the school's name to Delmas Morton Elementary in honor of the longtime Grand Prairie educator.

The school, located east of Highway 161 and midway between Interstates 20 and 30, will now be known as Delmas Morton Elementary.

The new name honors longtime Grand Prairie educator Delmas Morton, who taught at Dalworth (now Daniels) Elementary and Adams Middle School and was principal at Austin Elementary. The decision was made after the board discussed a list of options at its Monday meeting.

“That is where integration started in Grand Prairie. It was at Lee Elementary, Lee Junior High at the time,” said board member Burke Hall, explaining that the school was named after Lee a year after the 1954 Brown vs. Board of Education decision. “Delmas Morton is a perfect namesake for a school where integration started in our district. And I think that it rights a wrong, but it also honors a GPISD educator ... it tells a story of what we should honor in this community.” 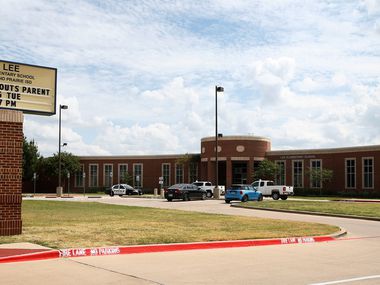 The four votes in favor of the change were from Aaron King, Emily Liles, Terry Brooks and Burke Hall. David Espinosa and and Bryan Parra abstained while Gloria Carrillo voted against it. She and Espinosa put forward the name of current Grand Prairie Assistant Superintendent of Early Education and Family Engagement Susanna Ramirez, and Parra suggested Cesar Chavez.

The board had previously discussed a name change for the school in 2017 but no action was taken.

Morton, born in Dallas in 1931, attended Dalworth Elementary and went to high school at Booker T. Washington in Dallas because Grand Prairie didn’t have one for Black students. After studying at Texas State College on a band scholarship, he earned his master’s degree at Prairie View A&M University.

He served in the Army during the Korean War and began his teaching career at Dalworth after returning. He later served as principal at Austin Elementary for 17 years of his nearly 45-year career in GPISD. He retired in 1996.

Anna Caplan. Anna Caplan covers Grand Prairie and Southlake. For nearly 10 years, she contributed restaurant reviews to the Fort Worth Star-Telegram. Her work has also appeared in 360 West, Eater Dallas, Edible DFW, A+C magazine, D CEO, GlobeSt.com and Houstonia magazine. She was the founding editor of the websites PureWow Dallas and Racked Dallas.