Some Texas lawmakers aren’t sure educators are doing everything they can to find thousands of students who still aren’t showing up for school during the pandemic.

So the state should use public education funding to encourage school leaders to search for absent children, members of the Senate Finance Committee said Monday. Their remarks come as public school districts risk losing millions of dollars because of enrollment drops.

“If the schools are going to get paid anyway, then what is their real incentive to find these missing kids?” asked Sen. Joan Huffman, R-Houston. “And are we paying twice for some students who are no longer at a school and really in another school district in another part of the state?”

Public schools are largely funded based on who shows up for classes. Some districts, including Dallas and Duncanville, have gone door to door looking for students who still haven’t shown up for virtual or in-person classes.

Texas offered schools a “hold-harmless” period during the first 18 weeks of the 2020-21 year. During this period, schools were not docked funding for unexpected enrollment drops brought about by the pandemic.

Educators asked the state to extend the grace period through the end of the academic year to keep funding stable during the costly pandemic. Education Commissioner Mike Morath said at a Senate Finance Committee meeting on Monday that he is “loath to make decisions” on extending the hold-harmless provision without conferring with lead appropriators from both the House and Senate. A resolution is coming “really quite soon,” the commissioner told senators.

Morath, who has the ability to extend the period without approval from legislators, has hinted repeatedly that such an extension could be forthcoming, but he has not yet made an announcement on when he might do so or if there would be any stipulations.

Monday’s committee meeting made clear that state leaders have hang-ups about whether schools are doing enough to earn the state funds. Both Republicans and Democrats are worried that districts won’t have an incentive to search for absent students if they receive the extended grace period automatically. 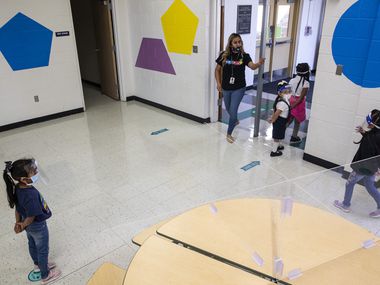 Sen. Royce West, D-Dallas, said school districts should show what they are doing to get missing students back in the classroom.

“School districts need to document efforts that they’re making in order to put those kids in a seat,” West said.

House Speaker Dade Phelan, R-Beaumont, expressed similar views in January. But neither West nor Phelan specified what kind of proof districts should have to show to receive their state aid.

Educators and teachers’ groups objected to the idea that schools aren’t already doing all they can to search for students.

“Schools and teachers will continue to search for missing students, along with everything else they are doing to keep educating the children who are regularly attending in-person classes on campuses or signing in to virtual lessons from home,” said Clay Robison, a spokesman for the Texas State Teachers Association. “Failing to extend the hold-harmless policy will only punish school districts and educators for pandemic-driven absences over which they have no control.”

If the hold-harmless period is not extended, districts could face funding shortfalls and have to lay off staff, Robison noted.

Educators are bending over backwards to learn how to teach remotely and to survive harsh conditions such as the power outages brought on by the recent winter storm, said Zeph Capo, president of the Texas chapter of the American Federation of Teachers.

“But you don’t have enough trust in our educators who have been doing wellness checks for their kiddos all weekend to get them connected back to school?” Capo said. “Teachers, better than anyone, understand the amount of work they will have to put in the longer students are absent from school.” 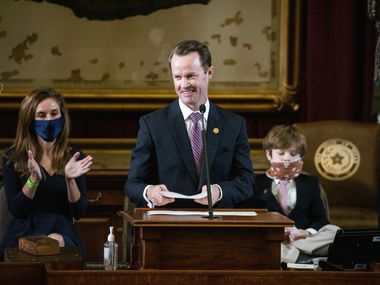 The education commissioner said he is hopeful a decision will be made in February.
By Emily Donaldson

Sen. Robert Nichols, who represents 19 counties in East Texas, characterized the large number of missing students as an “urban issue.”

Nichols, R-Jacksonville, recounted meeting with more than 100 rural school superintendents throughout the pandemic and asking them what they had done to find missing kids. School leaders encouraged students to return to class by prohibiting anyone not showing up from participating in extracurricular activities, Nichols said.

“That got a bunch of them back,” Nichols said. “If you’re too scared to go to class for COVID, then you shouldn’t go play football or basketball or cheerleading or band.”

Schools in Nichols’ district also worked with local businesses to expand Wi-Fi access for students who didn’t have it at home.

“I think it is totally inexcusable that in our urban areas … that we have such a high percentage of no-show,” Nichols said.

The state does not have an updated count of how many students were enrolled pre-pandemic that are no longer showing up for classes. Educators speculate on a variety of reasons students are missing school. The pandemic may have forced some to work to support their families. Others may have to grapple with challenging conditions at home. Some students may have moved in the last year.

Dallas ISD officials said earlier this month that nearly 12,000 students — most of them in high school — missed 70 or more days since school started.

Educators are knocking on doors and holding re-engagement events to try and bring those kids back into class. District officials say they have spent countless hours working to ensure students are learning.

Stay connected to the latest in education by signing up for our weekly newsletter. 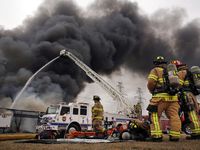