Natalicio served as president of the El Paso campus for 31 years.

Diana Natalicio was a pioneer in higher education, praised for growing a small El Paso campus into a national research institution while expanding college access for Latinos.

During her three decades overseeing the University of Texas at El Paso, she focused on getting more first-generation college students enrolled so that the school reflected the community.

“If you’re a public institution, then I think it’s your responsibility to serve the public,” Natalicio said in 2019 interview with The Dallas Morning News, recalling her early days as president. “One of the first data points that hit me was the disparity between the ethnic distribution of the El Paso population and the ethnic distribution of UTEP’s population. And the disparity was not explainable by anything except opportunity shortage of students of Hispanic background, or Latino background.”

Natalicio died Friday at the age of 82.

Current president Heather Wilson praised Natalicio for defying critics who said it wasn’t possible to open access to higher education to everyone and still offer a top tier experience.

“The Miner family has lost a great advocate and leader who devoted her life to making a difference in the lives of others,” WIlson said in a statement. “Our hearts go out to all of those whose lives she touched. We mourn the loss of an inspirational leader, and celebrate her legacy of access and excellence that lives on.” UTEP was consistently honored as one of the top Hispanic-serving universities in the nation. Natalicio, who led the university from 1988 to 2019, was named one of Time Magazine’s 100 most influential people in 2016.

Natalicio was appointed by President George H.W. Bush to the Advisory Commission on Educational Excellence for Hispanic Americans and later appointed to the National Science Board by President Bill Clinton.

In 2019, UTEP became an R1 doctoral university for its “highest research activity,” a designation attained by less than 5% of the nation’s institutes of higher education.

Natalicio’s brother Bill Siedhoff said in a statement: “Diana was my closest friend; we were very close throughout our lives. We not only shared many happy memories growing up in St. Louis, but she was my eternal travel partner, often traveling the world together. My sister loved El Paso, and she chose to retire there”.

“It is a sad day for El Paso. Dr. Natalicio was an incredible human being who dedicated her life to UTEP and to the thousands of students whose lives she changed for the better. I will always be grateful for her friendship and her counsel.” 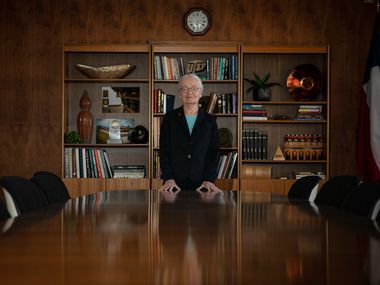 She changed higher education for West Texas Hispanics. Diana Natalicio is a Texan of the Year finalist

Natalicio grew up in St. Louis and later earned a bachelor’s degree in Spanish from St. Louis University. She studied Portuguese in Brazil on a Fulbright scholarship and received a master’s in Portuguese and a doctorate in linguistics from the University of Texas at Austin.

Eva-Marie Ayala. Eva-Marie Ayala is a veteran education reporter focusing on how local and state policies impact school children. Previously, she reported for her hometown paper the Fort Worth Star-Telegram. She is a national board member for the Education Writers Association.