It was not immediately clear why Karen Clardy stepped down

The Richardson school board president resigned suddenly Friday, during a tumultuous time for the district as it navigates fraught fights about how to handle the pandemic and faces a lawsuit from the state.

It was not immediately clear why board president Karen Clardy decided to step down now. She sent a brief letter to Superintendent Jeannie Stone and fellow trustees Friday, saying she made the “difficult decision” to resign, effective immediately.

Clardy said she was not prepared Friday to make a statement. Her term was set to expire in May 2022.

RISD is among several districts being sued by Attorney General Ken Paxton over the board’s decision to require masks on campuses in an effort to protect children and staff from COVID-19. Gov. Greg Abbott issued an executive order banning such mandates. The Centers for Disease Control and Prevention recommends universal masking inside schools.

Richardson trustees have been under immense pressure from community members, both those in favor of and those adamantly against mask requirements. The district temporarily closed a school because of a high number of cases and after a sixth grader was placed in the intensive care unit.

School trustees — mostly unpaid elected officials — across the country have been under an intense spotlight over the past two years, with many facing personal attacks. Disagreements over COVID-19 protocols, along with the way race and racism is addressed, fueled much of the tension in boardrooms.

Clardy voted in support of masking in Richardson schools.

Almost a quarter of Brentfield Elementary students were absent from in-person school as of Wednesday.
By Talia Richman

RISD parent Michelle Meals said a lot of ugliness has found its way to trustee meetings. Some parents in the audience refused to wear masks against district policy at one recent meeting, Meals said, with “terrible rhetoric” directed at board members.

“I could just see why anyone would step down at this point. I’m surprised any board members have any energy left to fight right now,” she said. “One of the things I have struggled with is a lot of this feels very anti-public school.”

At the most recent meeting, during a presentation by the COVID-19 Task Force, yelling parents interrupted a doctor’s update. The board went into a short recess as people in the audience screamed out that the trustees are an embarrassment.

The National School Boards Association and The School Superintendents Association released a joint statement this week, condemning threats members received as they make difficult choices about how to reopen schools amid the ongoing pandemic.

Disagreements are okay, said Viola Garcia, a Houston-area school trustee who is the NSBA president. Board members are used to heated meetings and difficult decisions on issues like redistricting or superintendent hires.

“Shouting contests, harassment, abuse and threats — both online and in-person — are absolutely not,” she said in a statement. “School board members want to hear from the communities they serve, especially during this critical moment in the pandemic. But community input must remain respectful and civil, even if it is in opposition.” 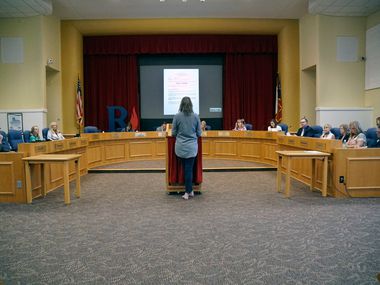 Last month, Fort Worth board president Tobi Jackson noted that pro-mask protesters gathered at her home, leaving signs and stuffed animals. The commotion interrupted a conference call she was on exploring the district’s legal options regarding a mask mandate, she said. That district has been sued by parents over its efforts to have a face covering requirement.

In Southlake Carroll ISD, two trustees were indicted on charges of violating the Texas Open Meetings Act by privately discussing the district’s now-stalled plan to address diversity and inclusion in schools.

Richardson trustees were also at the center of a fight recently over the placement of books related to gender identity and LGBTQ representation in school libraries. More books were added as part of an ongoing effort to boost inclusivity.

An enraged mother testified at the most recent RISD board meeting, saying her child was presented with a list of books she could choose to read that included some vulgar language and sexual content. Video of her comments has since been widely shared.

The board is expected to discuss Clardy’s resignation at its next meeting, potentially including next steps related to the vacant seat.

“On behalf of the district, we thank Karen for her service to RISD, both on the Board of Trustees and her 25 years at Lake Highlands High School,” Stone said in a statement. “Her contributions and commitment to students and teachers have been impactful and real, and we wish her the very, very best moving forward.”

Connect with needs and opportunities from Get immediate access to organizations and people in the DFW area that need your help or can provide help during the Coronavirus crisis.
I need help I can help
In This Story
Hide

Talia Richman, Staff writer. Talia is a reporter for The Dallas Morning News Education Lab. A Dallas native, she attended Richardson High School and graduated from the University of Maryland. She previously covered schools and City Hall for The Baltimore Sun.