Three Cameroonians who are part of the complaint were held at a detention center southwest of Dallas before being deported. “We should not be treating people as though they are lesser humans,” one migrant says.

Update, Oct. 14, 2021, 4:45 p.m.: U.S. Immigration and Customs Enforcement takes “seriously any allegations of inappropriate or unprofessional behavior and all ICE employees are expected to conduct themselves respectfully and with professionalism at all times. ICE is committed to ensuring that all those in our custody reside in safe, secure, and humane environments and under appropriate conditions of confinement.”

In general, restraints may be used to “prevent imminent danger to life or safety of an officer, the individuals, others in ICE custody, the public, or to forestall the imminent escape of a person in custody,” ICE said.

A civil rights complaint alleges that migrants were being wrapped in fabric, placed in restraints and shackled in a “cruel, inhumane and degrading” way by federal authorities who then deported them.

The complaint was filed Wednesday with the U.S. Department of Homeland Security on behalf of three asylum-seekers who were deported to Cameroon after being held in a federal detention center southwest of Dallas.

The complaint quotes one deportee as saying, “The darker your skin, the harsher the treatment” and another comparing the restraints to torture. One said he was shot with rubber bullets.

The complaint alleging violations of several U.S. federal laws and the international Convention Against Torture was brought by Fatma Marouf, a law professor at the Texas A&M School of Law in Fort Worth, and seven immigrant advocacy groups. It asks for a full investigation into the use of restraints by the U.S. Immigration and Customs Enforcement, a DHS agency, and the granting of humanitarian parole so that the deported men can be brought back to the U.S. to fully participate in the investigation.

The men were held at the federal Prairieland Detention Center for migrants in Alvarado, about an hour southwest of Dallas, until deported last year.

In Washington, D.C., the Department of Homeland Security didn’t respond to questions about the complaint and general deportation processes.

The CEO of the California firm that manufactures the restraining device detailed in the complaint, known as the WRAP, confirmed that his firm, Safe Restraints Inc., has sold the devices to ICE, the DHS enforcement agency.

“This is not a pain tool,” said Charles Hammond, the CEO and president of Safe Restraints. “It is a control tool to eliminate a conflict.”

Hammond was unfamiliar with the specific use of the WRAP by ICE but said training is provided on its “proper use.” Additional training is available at no charge. He said he hadn’t yet read through the complaint filed on behalf of the Cameroonian asylum-seekers. He emphasized that the WRAP is a tool to de-escalate conflict and said the fabric had the strength of a seat belt.

The complaint details harrowing allegations about the treatment of migrants in October and November 2020, during the waning months of the administration of President Donald Trump. The complaint provides a rare glimpse into the deportation process for immigrants, who are often shackled in metal chains, and now reveals how some were placed in full-body restraints for several hours. Once deported, immigrants often lose contact with their attorneys and any advocates who assisted them. Many have no attorneys at all.

About three dozen Africans were interviewed for the complaint by Sarah Towle, who works with the advocacy group Witness at the Border. Through her work last year, Towle said she began hearing from immigrants from Cameroon and other African countries who said they were “wrapped” and “bagged” as deportations picked up last year.

One deportee, identified with the pseudonym “Castillo,” said in the complaint that he was shot four times with rubber bullets in the legs at the Prairieland Detention Center in Alvarado before being placed on a deportation flight to Cameroon in November.

The three asylum-seekers are unnamed in the complaint released to the media because they fear retaliation and are hiding in Africa in countries other than Cameroon, Marouf said. The three men are identified in the full complaint sent to DHS, Marouf said.

In a phone interview from a country in Africa, where the man was hiding from fear of persecution in Cameroon, Castillo said the men who fired the rubber bullets had the agency “ICE” on their uniform. He said he had heard rumors that some immigrants were placed “in a sack” as they were being deported. As his own deportation began, he was thrown on the ground and heard someone say “bring the wrap.”

“I was totally immobile. I was already shackled with five-point restraints,” Castillo said in the phone interview. He said he was forced to bend and his body was at a 60- to 40-degree angle. “I was bending. I was just like a dead person,” he said by phone.

Once wrapped into the device, Castillo said he was carried onto the plane and placed laterally in a row of three seats. The flight lasted 16 hours. During the flight, the restraining device was taken off but Castillo said he remained shackled.

In Cameroon, he was detained by Cameroonian authorities for 12 days, he said, as his family fought for his eventual release. He had open sores on his wrists from the cuffs. 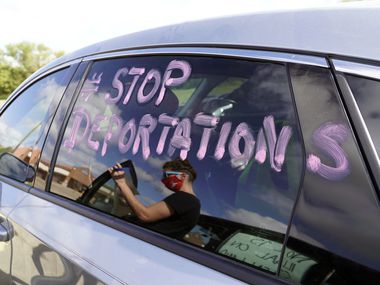 Cameroonian asylum-seeker who says he was abused in detention fights deportation: ‘I’m just trying to hold onto another day’

A second man, identified as “Godswill” in the complaint, said he was rolled into the restraining device and the straps pulled around his legs and torso. Then a strap from his chest to his feet left him “folded up like a mat.”

“There was so much pain in my waist and in my back,” he said in the complaint. “My lungs were compressed. I couldn’t breathe… I shouted, ‘You’re killing me!’”

Godswill said he was cuffed and chained while in U.S. custody for the entirety of the 16-hour flight to Douala, Cameroon, and that others were, as well.

In a phone interview from an African country where he is hiding after fleeing Cameroon again, Godswill elaborated on details in the complaint. He said he was forced to sign documents in a Louisiana detention that he believed were deportation papers. He called the ordeal like signing “my death warrant.”

On the plane, Godswill said he had difficulty breathing due to asthma and he had been taking pain medication for back problems. He began asking for help but instead was restrained further, he said. Other frantic deportees on the plane began shouting that he needed help, he said. “They said, ‘Stop killing our brother. Stop killing our brother.’ I said, ‘I can’t breathe. I need my inhalers.’”

Eventually, a man believed to be a U.S. federal government employee allowed him to use an inhaler, the Cameroonian said by phone.

“I want the U.S. public and the world to know that we are all humans no matter the color of our skin,” said the Cameroonian deportee. “Whether we come from Africa or Europe, we are humans. ... We should not be treating people as though they are lesser humans.”

Marouf and her team want their civil rights and civil liberties complaint to be investigated regarding the use of the restraints. The lawyer said it is premature to discuss lawsuits against the federal government.

Few details were released about the specifics of the men’s asylum cases. During the process in which the three men originally sought asylum after arriving in the U.S., the three complainants all passed credible fear interviews — an important first step. But they lost their cases in immigration court. Some had pending federal court appeals at the time they were deported, Marouf said.

Towle said many Africans have received sloppy legal advice or no legal counsel at all as they tried to navigate the U.S. immigration system.

The national asylum grant rate for Cameroonians may be higher than the overall grant rate, she said, but the grant rate for the immigrant judges where the cases were located is “very low,” she added. Moreover, the trio of men faced multiple moves while in custody, complicating their ability to retain legal counsel.

“They all came here thinking this was the land of safety and unfortunately this is the worst abuse they experienced,” Marouf said of the asylum-seekers.

“It is unbelievable that someone could not be just shackled for 16 hours on a flight,” Marouf said, “But on top of the shackles to be put in a device that doesn’t allow for any movement?”

The Dallas Morning News previously published stories about Cameroonians seeking U.S. asylum and detained at the Prairieland civil detention center in October 2020 when protests began against their detention and demands were made for humanitarian deportations. 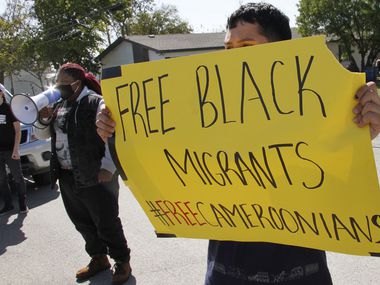 Protests grow over pending deportations to Cameroon, amid abuse allegations

A protest is widening over the pending deportations of dozens of Cameroon-born immigrants who lawyers and other advocates say were abused in U.S. detention centers and could face death if sent back to their homeland. The immigrants, many of them asylum-seekers, were transferred in recent days to the civil detention center in Alvarado, Texas. Four detained Camerooonians said in phone interviews from Prairieland Detention Center that they feared they would be tortured or killed if returned to their violence-plagued homeland.
By Dianne Solis

Dianne Solis. Dianne covers immigration and social justice issues. The award-winning writer is a Wall Street Journal alum and a former foreign correspondent who was based in Mexico. She was a Nieman fellow at Harvard and holds journalism degrees from Northwestern University and Cal State University, Fresno.