The congressman announced the decision on Tuesday, providing Warren a boost hours before she was set to take the stage at a crucial Democratic presidential debate in Iowa.

“Sen. Warren is ... the only candidate who can unite the Democratic Party and our country, two things essential to defeating Donald Trump and restoring America’s leadership role at home and abroad,” Joaquin Castro said in a news release.

Candidate tracker: Where the 2020 presidential contenders are visiting in Texas

Candidate tracker: Where the 2020 presidential contenders are visiting in Texas
By Tom Benning

One could be forgiven for thinking the lawmaker had already endorsed Warren in the wake of his brother, a former San Antonio mayor, this month dropping his own White House bid.

Julián Castro backed Warren, a longtime ally, just four days after shuttering his presidential campaign. From that moment on, Joaquin Castro’s Twitter feed has been filled with retweets of posts that shared and praised the news of his brother’s advocacy on Warren’s behalf.

Joaquin Castro last week even joined his brother and Warren at a campaign rally in New York.

But the congressman had not yet made official his new preference in the competition to take on Republican President Donald Trump — a delay that was likely designed to spread out the bounce Warren might get from the support of two prominent Democratic politicians.

Julián Castro’s bonafides are well-known after running a campaign that saw him win plaudits from progressives for his detailed policy proposals but struggle to gain broader traction. The former U.S. housing secretary had been the race’s only Latino candidate.

Joaquin Castro has become a household name in his own right, with Warren calling him a “leader on issues near and dear to my heart.”

The lawmaker is the chairman of the influential Congressional Hispanic Caucus. He’s garnered attention for taking on Trump over issues like impeachment and the border wall. He considered running this year against Texas Sen. John Cornyn, a Republican, before deciding to pass. 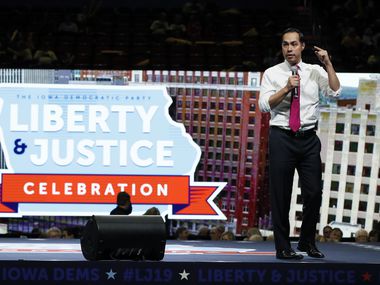 Joaquin Castro said on Tuesday that Warren is “going to make sure that everyone has great opportunities to achieve their dreams and get ahead.”

“Sen. Warren is going to fight for all of us, including for people who came from neighborhoods like mine,” said the lawmaker, who had served as chairman of his brother’s presidential campaign. “That’s why I’m proud to be in this fight with her.”

Warren used the endorsement news to tout her credentials in Texas, a critical Super Tuesday primary state. The senator graduated from the University of Houston and then served as a law professor there and at the University of Texas at Austin Law School.

Among the Democrats in Texas’ congressional delegation, however, former Vice President Joe Biden has garnered the most support. Five Texas Democrats in Congress have backed Biden for president, with Dallas Rep. Colin Allred being the most recent lawmaker to join the list.

Tom Benning. Tom covers the intersection of business and government in Washington. He came to D.C. in 2016 from The News' Austin bureau. He has also previously worked in Dallas, covering everything from City Hall to transportation to former President George W. Bush. He is a graduate of the University of South Carolina.