He also announced the state could open up vaccination eligibility to more Texans as early as next month and is evaluating whether to roll back restrictions.

AUSTIN — Gov. Greg Abbott on Thursday outlined ambitious plans for the state’s COVID-19 immunization efforts, including vaccinating seniors in their homes and opening up eligibility to include more Texans as early as next month.

The Republican also said the state is evaluating when it might be able to roll back some of its current restrictions, including mask requirements and occupancy limits, that were put in place to stem the spread of the coronavirus.

About 1.6 million Texans have been fully vaccinated to date, a small fraction of the state’s 29 million residents, according to state data.

The pace of vaccinations could soon accelerate, however, with the expected approval of a third vaccine from Johnson & Johnson. Unlike the vaccines from Pfizer and Moderna, it requires only one dose.

Starting next week, more than 1,100 members of the Texas National Guard will be deployed across the state “to help communities vaccinate homebound seniors,” Abbott said during a news conference in Corpus Christi.

“Our mission is very simple and that is to get our seniors vaccinated as quickly as possible,” he said, adding that his goal is to have all willing Texans 65 and older vaccinated by the end of March. 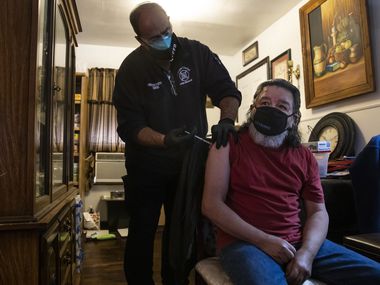 The initiative is modeled after a Corpus Christi Fire Department effort highlighted by The Dallas Morning News to deliver shots to vulnerable residents in their homes. The program targets people who are too frail or sick to travel to a vaccination hub, where most of the state’s shots are being administered.

The statewide effort will start with about 8,000 vaccines, but the number could grow significantly if the Johnson & Johnson vaccine receives a green light soon, Abbott said.

The National Guard will collaborate with community organizations, such as Meals on Wheels, to “identify where the homebound seniors are who have not yet received a vaccine,” Abbott said.

It is not yet clear where in the state the program will begin.

“With the amount of the vaccines that we are getting, I would anticipate it being very soon — very soon as being defined as some time in March,” he said.

The state has not yet determined who will come next. Several groups have been pushing for priority access, including those representing teachers and businesses with employees who cannot do their jobs from home. 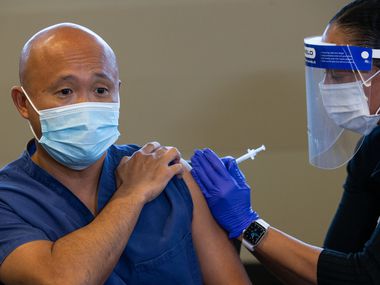 Lobbying for vaccines: Interest groups plead to move up in line for Texas’ COVID-19 shots

Lobbying to get to the front of the line for a COVID-19 vaccine in Texas is under way, as a document obtained by The Dallas Morning News on Wednesday illustrates.
By Allie Morris and Robert T. Garrett

The decision is guided by the state’s 17-member Expert Vaccine Allocation Panel, which is made up of state officials, public health experts and lawmakers. The next priority group is “still being discussed,” said David Lakey, vice chancellor for health affairs and chief medical officer at the University of Texas System and a member of the panel.

As more people receive the vaccine, Abbott also said, the state could roll back restrictions.

“We’re working right now on evaluating when we are going to be able to remove all statewide orders, and we will be making announcements about that pretty soon,” Abbott said.

He offered no further details. Since July, most Texans have been required to wear a face mask in public. Restaurants and bars are limited in the number of customers they can have inside.

The vaccines are effective at preventing severe cases of COVID-19, but it’s still not clear how well they stop the spread of the virus.

The U.S Centers for Disease Control and Prevention recommends that people who are fully vaccinated against COVID-19 continue to wear masks, avoid crowds and socially distance.

While the number of new COVID-19 cases and hospitalizations continues to fall from a statewide high in mid-January, the virus is still circulating at high levels.

On Wednesday, 6,738 people were hospitalized with COVID-19 across the state and 339 deaths were reported.