‘Strength is in numbers.’ How a new Dallas group plans to combat rise in hate crimes

Flanked by leaders representing diverse groups and communities from across the area, Mayor Eric Johnson on Wednesday announced a new advisory council to confront an increase in hate crimes.

The new 16-person Mayor’s Anti-Hate Advisory Council will advise the city and Dallas police on how they can respond to new threats and old prejudices related to hate. Its creation comes just as the U.S. Department of Justice released new data two weeks ago showing a 42% increase in hate crimes nationally since 2014.

“We’re concerned because the temperature does seem to be rising in the rhetoric and if you look at social media,” Johnson said. “I try to look at it as little as I can — as an elected official I have to look at it some — but it seems like the positive comments are outweighed by the negative comments.”

“We want to be aggressive and proactive about educating folks and emphasizing that our diversity is a strength,” he added. “And that we’re a welcoming city, so that it never becomes a major problem.” 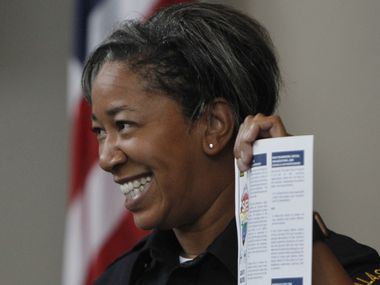 Hate crimes account for a relatively small number of offenses in Dallas, Johnson said, but “are disproportionately impactful to our city’s psyche and on the quality of life of our residents.”

The new group plans to meet regularly to discuss how to promote dialogue between people to increase tolerance, Johnson said. It’s made up of leaders representing faith groups, underrepresented communities and other local groups and organizations.

“The folks up here today were selected because I know that they share my commitment to making sure that we focus on the positive,” Johnson said. “We want folks to come to Dallas.”

Nationwide, race was the most common motivator for hate crimes in 2020. Race, ethnicity or ancestry accounted for about 64% of reported incidents, followed by religion (15%), and sexual orientation (14%).

Most 2020 hate crimes in Texas — about 35% — involved anti-Black prejudice while 13% involved anti-white bias, according to the federal report. In Dallas, most incidents (12) were motivated by bias against Black people.

Sammie Berry, minister of the Dallas West Church of Christ and chair of Dallas Area Preachers and Church Leaders, will serve as one of four co-chairs on the new advisory group. He said he has been involved in the city’s faith community and ministry for more than 40 years.

“I serve this city because I love the city of Dallas,” Berry said. “I look forward to working on something, however, that I don’t like about the city of Dallas — and that is an increasing trend of hate, violence and other hate crimes.”

“It’s important that we all have a clear definition of what hate crime is and what it looks like,” he said. “We need to look at the value systems, the policies and laws that allow hate to continue to exist.”

Gary Sanchez, the board chair of the North Texas LGBT Chamber of Commerce, said Dallas is seen by other towns as a place where people can be their true self. Everyone deserves to feel safe and respected walking the city’s streets, he said.

“Dallas must and will step up to be that beacon,” said Sanchez, who will also serve as a co-chair. “The city that shines bright, where everyone is welcome and hate is not tolerated.”

The other two co-chairs are Sanjiv Yajnik, the president of financial services at Capital One, and Sherry Goldberg, the chair of the community service initiative of the Jewish Federation of Greater Dallas.

Other members include leaders from the Hispanic Women’s Network of Texas, the Greater Dallas Taiwanese Chamber of Commerce and the National Black Trans Advocacy Coalition.

“Strength is in numbers,” Goldberg said. “I know this step to bring everyone together will make our city even better than it is today.”

Yajnik said he looks forward to calling on everyone to step forward and cherish their differences.

“When you bring these two things together — common humanity and this rich diversity — you get magic,” he said. “... We have this amazing diversity right here within our four walls of Dallas.

“And now it is up to us to make that magic happen in a much bigger and a much stronger way.”

Kelli Smith, Staff Writer. Kelli covers breaking news and public safety at The Dallas Morning News. She is a native of El Paso, Texas, and a recent graduate of the University of Notre Dame. Before joining staff, she reported for The Chicago Tribune and KTSM, the NBC affiliate in El Paso.