Texas will take its time, not hire private contractor for audit of 2020 election results

The review into Collin, Dallas, Harris and Tarrant counties won’t begin until next spring.

AUSTIN — Five days after announcing a “forensic audit” of the 2020 election in a handful of counties, the state late Tuesday unveiled plans that push most of the work well into next year.

Texas officials also declared they won’t hire an outside contractor such as was used in Arizona’s widely criticized partisan audit.

The details released by the Texas Secretary of State’s office offer the first picture of the “full forensic audit” it publicized last week, just hours after former President Donald Trump, who continues to push falsehoods of a stolen election, requested one.

The first phase of the state’s audit relies on checks that every Texas county already does in the days following an election to verify the equipment counted ballots correctly. In a second phase beginning next spring, the state will review whether Collin, Dallas, Harris and Tarrant counties properly followed election procedures in the 2020 election.

The office did not provide a cost estimate for the work, but has previously said it anticipates funds will come from the Legislature.

Results of the audit likely won’t come out until sometime next year, when Gov. Greg Abbott and all state legislators are on the ballot for the 2022 midterm elections.

The details evidently did not please Trump. On Wednesday, he told the Texas Tribune that it is “a big mistake for Texas” not the pass a GOP-authored bill that would allow party officials to request audits of their county’s 2020 election results and also set up a process for future reviews.

“By allowing the Democrats to do what they do, it will make it much harder for the Governor and other Republicans to win election in 2022 and into the future,” Trump told the Tribune. 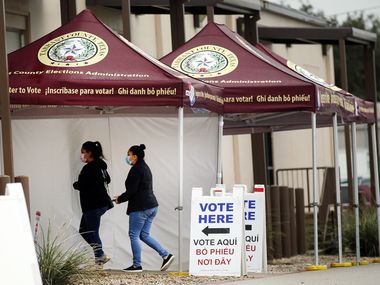 Dallas County, others had no advance notice of state-ordered audit of election results

Texas is the latest state to pursue an audit of the 2020 election amid pressure from Trump and his supporters. But unlike other states where Republicans are pushing reviews into results showing Democrat Joe Biden won, Trump carried Texas last November by six percentage points.

“At the end of the day what Texans need to know is the machinery is secure, the elections were accurate and that’s what all this information will show,” Jenkins, a Democrat, said Tuesday.

Collin County Elections Administrator Bruce Sherbet said he’s “totally confident in the election and will assist in any way possible in helping with the audit.”

“It’s just going over what processes were followed,” he said.

Abbott defended the audit in a recent interview with Fox News and said it won’t change the election result.

“We know regardless of the outcome of these audits, Donald Trump will still have won the state of Texas,” the Republican governor told Fox News Sunday host Chris Wallace, according to a transcript of the interview. “However, we do have every single year, including in the 2020 elections, allegations of illegal voting in places in the state of Texas.”

Abbott didn’t say whether any allegations came from the four counties being audited. Typically, the attorney general’s office investigates election violations, which are rare. Last year, the office resolved 16 prosecutions in a state of more than 15.7 million registered voters, according to the Houston Chronicle.

In a two-page memo describing the audit, the Secretary of State’s office said it has identified “potential non-U.S. citizen voters” whose registration will be canceled if they can’t show proof of citizenship. The office also said it has received reports of people who may have cast a ballot twice or voted using a dead person’s name, but did not say how many or in which counties.

“The purpose of this audit is to ensure all Texas voters can have confidence in the elections systems in our state, and to address any outstanding issues county election officials may face that undermines the integrity of our elections,” the office said in the memo.

The second audit phase slated to begin next year will review documents from the four counties that include statements of residence, reasonable impediment declarations and chain of custody forms, among other things. The memo notes that a manual recount of ballots from certain precincts or polling locations could be triggered if the review finds any “irregularities or deviations from election administration procedures that may have affected the accuracy of the electronic voting system ballot count.”

Missing from the memo is a deeper explanation of the timing, the potential cost and how the four counties were chosen. In its announcement last Thursday, the office said it picked Texas’ two largest Republican and Democratic counties. Three of them went for Biden last November, however, while Trump carried Collin County. 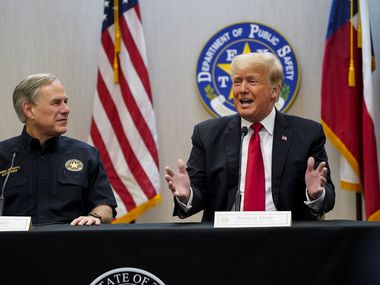 Officials from the targeted counties have defended their elections as fair and accurate, while casting doubt on the audits they say are meant to placate Trump. Earlier Tuesday, Harris County Attorney Christian D. Menefee sent a letter to the Secretary of State’s office requesting its internal documents “to get answers since we’ve heard nothing about this audit,” he wrote on Twitter.

The review comes as the Secretary of State’s office is without a permanent leader. Ruth Ruggero Hughs left last May after the state Senate refused to confirm her appointment. Hughs oversaw the 2020 election, which one of her top deputies called “smooth and secure.” Abbott has yet to name a replacement.

“Nothing has changed for any county in how they’ve conducted elections since November,” he said.

While the state has called the review a “forensic audit,” election experts question that term, as it refers to investigations of suspected wrongdoing and is typically limited to finances.