Texas voters will decide 8 state constitutional amendments on Nov. 2. How would they impact you?

A majority of voters must support each of the proposed amendments, which were approved by the Legislature earlier this year, to put the changes on the books.

AUSTIN — Texas voters will decide Tuesday whether to approve eight changes to the state constitution, including two that stem from issues that arose from the state’s response to COVID-19.

A majority of voters must support each of the proposed amendments, which were greenlighted by the Legislature earlier this year, to put the changes on the books. Polls will be open Tuesday from 7 a.m. to 7 p.m.

Here’s what you need to know about how the proposed constitutional amendments could impact Texans and their communities.

Two of the proposed amendments respond to government restrictions that were imposed during the COVID-19 pandemic. Officials across the political spectrum have come under fire for their handling of the ongoing health crisis, whether it be over shutdowns or mask mandates.

Proposition 3 would prohibit any governmental entity from enacting any rule prohibiting or limiting religious services.

The proposed change, hailed by supporters as protecting religious freedom, comes after some places of worship were limited during pandemic lockdowns.

What you’ll see on the ballot: “The constitutional amendment to prohibit this state or a political subdivision of this state from prohibiting or limiting religious services of religious organizations.”

Proposition 6 would allow residents in nursing homes and similar long-term care facilities to designate an essential caregiver who could not be denied in-person visitation.

The proposed amendment responds to facility closures earlier in the pandemic, when residents were isolated from loved ones for months.

What you’ll see on the ballot: “The constitutional amendment establishing a right for residents of certain facilities to designate an essential caregiver for in-person visitation.”

Proposition 4 would require judicial candidates to be Texas residents with a license to practice law in Texas, to be a practicing lawyer or judge for at least eight to 10 years before election and not have had their law license revoked or suspended during that time.

What you’ll see on the ballot: “The constitutional amendment changing the eligibility requirements for a justice of the supreme court, a judge of the court of criminal appeals, a justice of a court of appeals, and a district judge.”

Proposition 5 would allow the State Commission on Judicial Conduct to take complaints, conduct investigations and take other action against a candidate running for state judicial offices. The commission currently only handles officeholders, not candidates.

The lawmakers behind the proposed amendment said it seeks to “ensure that judicial elections are fair” by holding candidates and sitting judges to the same standards.

What you’ll see on the ballot: “The constitutional amendment providing additional powers to the State Commission on Judicial Conduct with respect to candidates for judicial office.”

Proposition 2 would authorize counties to issue bonds to fund transportation and infrastructure projects in neglected or underdeveloped areas. Cities can already issue these bonds, but not counties.

The amendment would allow counties to use increases in property tax revenue in the area to repay the bonds. Critics, such as the state Republican Party, argue the proposal would create more local debt.

What you’ll see on the ballot: “The constitutional amendment authorizing a county to finance the development or redevelopment of transportation or infrastructure in unproductive, underdeveloped, or blighted areas in the county.”

Proposition 7 would allow a surviving spouse of a person who is disabled and receiving homestead exemptions on school district property taxes to continue to take advantage of the exemption, as long as the surviving spouse is 55 or older.

What you’ll see on the ballot: “The constitutional amendment to allow the surviving spouse of a person who is disabled to receive a limitation on the school district ad valorem taxes on the spouse’s residence homestead if the spouse is 55 years of age or older at the time of the person’s death.”

Proposition 8 would extend tax exemptions to a surviving spouse of a member of the military who dies because of any injuries sustained during their service, whether it is related to combat or not.

What you’ll see on the ballot: “The constitutional amendment authorizing the legislature to provide for an exemption from ad valorem taxation of all or part of the market value of the residence homestead of the surviving spouse of a member of the armed services of the United States who is killed or fatally injured in the line of duty.” 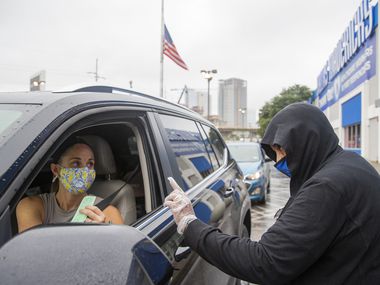 Sami Sparber. Sami Sparber covers politics in Austin for The Dallas Morning News. She is a spring 2021 graduate of the University of Texas at Austin and hails from the Chicago suburbs. Previously, she interned at the Wall Street Journal, Texas Tribune, NBC News in Washington and the Houston Chronicle’s Austin bureau.