AUSTIN — The Travis County district attorney has determined that Texas Attorney General Ken Paxton violated the state’s open records law by not turning over his communications from last January, when he appeared at the pro-Trump rally that preceded the attack on the U.S. Capitol.

The district attorney gave Paxton four days to remedy the issue or face a lawsuit. The probe was prompted by a complaint filed by top editors at several of the state’s largest newspapers: the Austin American-Statesman, The Dallas Morning News, the Fort Worth Star-Telegram, the Houston Chronicle and the San Antonio Express-News.

In a letter hand delivered to Paxton on Thursday, the district attorney’s head of public integrity said her investigation showed the attorney general’s office broke state law by withholding or failing to retain his own communications that should be subject to public release.

“After a thorough review of the complaint, the (district attorney’s) office has determined that Paxton and (his office) violated Chapter 552 of the Texas Government Code,” wrote Jackie Wood, director of the district attorney’s public integrity and complex crimes unit, referring to the open records statute.

Paxton’s office did not immediately return phone and email messages.

José Garza, Travis County district attorney, is a Democrat. Paxton is a Republican running for reelection this year. He is facing the fiercest scrutiny of his decades-long career, with several GOP challengers, three state criminal indictments, allegations of an extramarital affair and a pending FBI bribery investigation.

Paxton has denied any wrongdoing.

Garza’s office declined comment, saying the letter speaks for itself.

Jim Hemphill, the immediate past president of the Freedom of Information Foundation of Texas, said Paxton may take issue with the DA’s investigations — or he could voluntarily choose to release this and other records to the public.

“It’s a rare occurrence where a requestor actually has tangible evidence,” Hemphill said. “It will be interesting to see how the attorney general responds to this.”

The Texas Public Information Act guarantees the public’s right to government records, even if those records are stored on personal devices or public officials’ online accounts. The attorney general’s office enforces this law, determining which records are public and which are private.

On March 25, six news outlets jointly published a story that raised questions about whether Paxton was breaking open records laws. On Jan. 4, five newspaper editors filed a complaint asking the district attorney to investigate the alleged violations. Anyone can file a complaint with a local prosecutor if they believe a public agency is withholding information in violation of the Public Information Act.

Wood’s notice to Paxton said the district attorney’s office concurred with the allegations in the editors’ complaint.

First, the editors raised concerns that Paxton’s office was using attorney-client privilege to withhold every single email and text message sent to or received by him around the time of the Jan. 6 rally, which preceded the attack on the U.S. Capitol. Paxton and his wife were in Washington that day and appeared at the rally.

Wood said withholding all of Paxton’s communications during that week violated the law. As evidence, she noted the attorney general’s office released nearly 500 pages of communications sent to or received by First Assistant Attorney General Brent Webster — including some emails that included Paxton as a recipient.

The newspaper editors also said the attorney general’s office had no policy for handling work-related records kept on personal devices or accounts.

When a reporter for The News sent Paxton a work-related text message and another reporter requested all his messages that day, Paxton’s office responded that no responsive messages existed. A spokesman for Paxton later said the attorney general doesn’t have to retain “unsolicited and unwelcome text messages to personal phones.”

Wood noted that the attorney general’s office had stated in the past that the communications of government officials were subject to retention policies and the open records law.

Finally, the editors raised concerns that Paxton was turning over other people’s communications in response to requests for his own text messages.

The DA’s investigation agreed that Paxton had not provided his own text messages with officials at the attorney general’s office in Utah — where Paxton and his wife traveled during the February freeze — and instead turned over a copy of another person’s text to Paxton. The attorney general’s office did not explain why Paxton didn’t provide his own version of the text exchange. 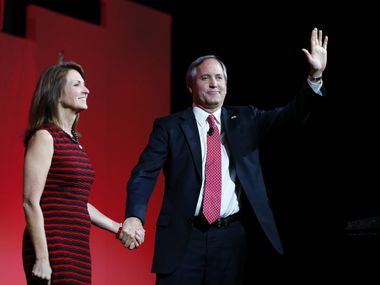 By Lauren McGaughy and Allie Morris

“Open records laws are vitally important to our democracy,” Hardy said. “Taxpayers deserve to know and see how their elected leaders are using government resources, spending their time and, in this case, if they are following the law. We are thrilled with the decision.

“We also hope such rulings will encourage all elected officials to adhere to the state’s open records laws,” she added.

Bill Aleshire, an attorney and transparency expert, said he could not recall an attorney general ever being accused of violating open records laws to avoid releasing his own communications.

“When the public official responsible for enforcing public records laws violates those laws himself, it puts a dagger in the heart of transparency at every level in Texas,” Aleshire said. “Why should other Texas officials be transparent with public information if the AG himself is not?”

Chuck Lindell with the Austin American-Statesman, Allie Morris with The Dallas Morning News, Eleanor Dearman with the Fort Worth Star-Telegram and Taylor Goldenstein with the Houston Chronicle contributed to this report.