Despite the trend of fewer coronavirus cases, Dallas County remains in the ‘red zone,’ Jenkins cautions

The county reported 204 cases Friday along with four deaths, raising the week’s toll to the highest yet.

Updated at 4:15 p.m.: Revised to include the latest information for Denton and Collin counties.

The county reported 204 new cases of the virus, as well as four additional deaths. Dallas County has averaged about 205 new cases per day this week, compared with 233 last week and 246 the week before.

Jenkins also said the number of hospitalizations, emergency room visits and ICU admissions in Dallas County have been “relatively flat.”

“Unfortunately, none of this leads to the 14-day decline that the doctors have talked about, so we are still at that red ‘stay home stay safe’ zone,” he said in a written statement, referring to a color-coded chart created by health experts that outlines precautions people should take when going about their daily activities.

The county’s four latest victims of COVID-19, the disease caused by the coronavirus, were three Dallas residents — a man in his 50s and a man and a woman in their 70s — and a man in his 80s who lived at a long-term care facility in Irving. Of the county’s 207 total coronavirus deaths, more than a third have been associated with long-term care facilities.

Dallas County has reported 37 coronavirus deaths so far this week, including a record 14 on Tuesday, after announcing 27 last week and 33 the week before.

The new cases bring the county’s total to 8,477 — about 3.2 confirmed cases for every 1,000 residents, the highest rate among North Texas counties.

Dallas County does not report a number for recovered patients.

Jenkins noted that although restaurants and bars have been allowed to reopen, doctors are still recommending that people avoid dining in and instead order takeout and celebrate at home.

“If we’ll all make smart decisions, we can make it to a lower threat level where more opportunities for entertainment and commerce are open to us, and where less people are getting sick and dying,” he said.

One of the victims was a Fort Worth man in his 60s; the other was a Watauga woman in her 40s. Health officials said one had underlying health conditions, but did not elaborate.

Tarrant County has had 141 deaths from the virus.

The county also reported 96 new positive tests Friday, raising its total to 4,899 — about 2.3 confirmed cases for every 1,000 residents.

According to the county’s data, 184 COVID-19 patients remain hospitalized, while 1,809 have recovered. Sixty-three percent of the county’s hospital beds are occupied, and 30% of its ventilators are in use.

The woman, who was in her 60s, had been hospitalized, according to the county’s health department.

Officials also reported 17 new positive coronavirus tests. The county has had 1,205 confirmed cases — about 1.4 for every 1,000 residents — with 615 recoveries.

County Judge Andy Eads urged residents who have recovered from the illness to donate their plasma to help other patients. People may contact Carter BloodCare at 800-366-2834 for details.

A 98-year-old woman who lived at Life Care Center of Plano died Friday morning, while an 82-year-old Richardson woman’s May 3 death was reported to county officials Friday.

They were the first deaths attributed to the virus in Collin County in a week. The county has had 33 total COVID-19 deaths.

The county also reported 14 new cases, raising its total to 1,132 — 1.1 per 1,000 residents. Nineteen patients remain hospitalized, while 786 have recovered.

Officials say 128 patients have recovered. Eleven have died — all of them residents of Broadmoor Medical Lodge in Rockwall, where 40 residents and 21 employees have tested positive for the virus.

Eight new cases of COVID-19 were reported in Kaufman County on Friday.

The county has had 179 total cases. One resident has died, and 144 are presumed to have recovered.

There have been 173 total cases in the county. Four residents have died, including one who was out of state, while 118 have been released from isolation.

Three Dallas Fire-Rescue employees remain isolated after contracting COVID-19, while 13 have been cleared to return to work, the department said Friday.

In addition, 21 members of the department are quarantined after possible exposure to the virus.

Dallas County Judge Clay Jenkins, a Democrat first elected in 2010, is the county's top executive and serves as the presiding officer of the commissioners court. As county judge, an honorary title for the county’s top spot, he is in charge of emergency management. 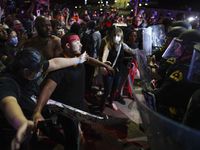