Homebound residents in the Meals on Wheels program will be eligible to receive Johnson & Johnson vaccines starting Tuesday.

A program to deliver COVID-19 vaccines to adults with disabilities and elderly residents who can’t physically leave their homes is expanding to Dallas on Tuesday, according to the city.

Staff with Dallas Fire-Rescue and the Visiting Nurse Association of Texas will provide one-dose Johnson & Johnson vaccines to homebound residents in the Meals on Wheels program.

They plan to inoculate around 70 people a day for up to six days a week, said Chris Culak, a spokesman for the VNA of Texas. The nonprofit, which administers hospice care and Dallas County’s Meals on Wheels program, has identified about 350 people who said they want the vaccine.

It’ll be the first in-home vaccination program in the city since inoculations began in late December.

The city currently gives vaccinations by appointment at The Potter’s House in southern Dallas. Other drive-through mass vaccination sites in the city include a joint FEMA and Dallas County operation at Fair Park and a Parkland-run site at the Ellis Davis Field House.

“For our vulnerable homebound residents, this effort can finally bring an end to the fear of the last year,” Mayor Eric Johnson said in a statement Wednesday. “And for our entire city, these vaccinations represent another important step toward achieving community immunity against a deadly and devastating virus.”

Another at-home vaccine program is expected to kick off in the southern part of the county soon. 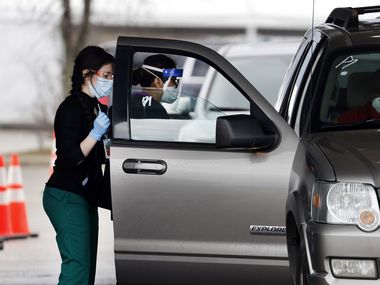 Parkland expands COVID vaccination access; Some seniors have a shot at getting them at home

Residents in southern Dallas County — including Cedar Hill, DeSoto, Lancaster and Duncanville — are going to have a lot more COVID vaccine beginning this week thanks to two efforts by the county and Parkland hospital.
By Nic Garcia

Around 4,500 are enrolled in the Meals on Wheels program in Dallas County, and a little more than half are based in Dallas, Culak said. The majority of their clients are over 60. Other efforts to vaccinate elderly residents are taking place around the state.

“Our hope is to have this going for the foreseeable future as long as the city continues to get its allotment of vaccines or until we vaccinate absolutely all of our clients who want it,” Culak said.

There currently is no in-home vaccination program for people outside of the Meals on Wheels network.

Culak said his nonprofit is contacting residents to verify if they want the vaccine and will then determine the routes the six teams of staff members need to take to give out the shots.

He estimates about a third of Dallas County clients have previously agreed to get the shots through their program, about 20% said they received shots already and half either didn’t want it or couldn’t be contacted. He said he believes the prospect of having to get two doses may have scared off some. Staff is reaching out again to people who either turned down doses or couldn’t be contacted previously and offering them the Johnson & Johnson vaccine, Culak said.