Oliver couldn’t do anything except stay on his back, eat, sleep and laugh sometimes, but he was my greatest teacher.

My brother Oliver was blind. No matter how hard I hoped he could see when I was a boy, he just kept staring at the ceiling with his blank, beautiful brown eyes. Sometimes I’d show him a drawing I made at school, or a comic book I was reading, but always the same expression: eyes unresponsive.

I know that Oliver could hear because whenever anyone by accident let the lid of his diaper box slam shut, his shoulders shook a bit. Music or the voice of my mother seemed to soothe him, but the doctors said it was not possible because Oliver sustained such profound brain damage before he was born that he would never be able to make intellectual connections to such things as tenderness.

My brother never touched many things, not snow or sand at the beach. His hands were twisted, his fingers limp and useless. 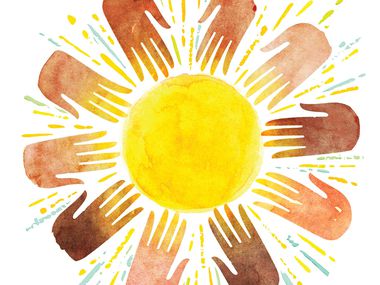 He couldn’t run with me to the swamp out back in winter and go ice-skating, or climb the apple tree and reach for that one perfect apple in the fall. His ankles were twisted on his boney legs. Heck, Oliver couldn’t even eat that apple because he couldn’t chew. All the food he ate was puréed and fed to him with a spoon, which he couldn’t hold by himself.

I did know that my brother had working taste buds because when my mother tried a new recipe, or made a new soup that Oliver didn’t like, he’d spit it all over the wall, and me. At least he was good at something: spitting.

Oliver couldn’t talk about girls or books or the Beatles. He didn’t have the intellectual capacity to learn how to speak. When I fed him dinner, I’d babble about the Yankees, or about how I barely passed my driver’s license test, or how Peggy actually wanted to go to the junior prom with me, but he never cared and never responded.

I never knew if my brother could detect the fragrance of a flower, the aroma of perfume, the scent of the garden skunk, or the whiff of bacon.

Even though I have a doctorate and two masters degrees from Columbia University, Oliver has been my greatest teacher.

“Be grateful you can see snow falling, Chris. Be grateful you can catch a ball, inhale the aromas of spring, run to catch a bus, give thanks that you can hold your grandson, kiss, swim, read, make omelets, hold a cold glass of ice tea in your hand.”

My brother couldn’t do any of these things. Actually, he couldn’t do anything except stay on his back, eat, sleep, and laugh sometimes, but from his example, I grew up in a house where Oliver reminded me what was important.

Oliver taught me the true message of Thanksgiving. Between the collecting of candy at Halloween and the collecting of gifts at Christmas or Hanukkah sits Thanksgiving, a day when we can all sit back and pause for a moment with gratitude for who we are and for what we are all capable of doing.

Christopher de Vinck newest book is “Ashes,” a novel published by HarperCollins, and he is the author of “The Power of the Powerless: A Brother’s Lesson of Love” (Crossroad Book). He wrote this column for The Dallas Morning News.

Got an opinion about this issue? Send a letter to the editor, and you just might get published.