How a hands-on, student-led schooling model translated into the virtual learning environment

Outlaws like Wayne Walker give Dallas its moral center

Wayne Walker is a dissident. The soft-spoken executive director and pastor of OurCalling isn’t leading marches or shouting into a bullhorn or burning anything down; he’s simply helping his neighbor in need. And that has put him at odds with a Dallas ordinance that forbids such help.

According to an ill-conceived rule, charities in Dallas are not allowed to give shelter to homeless people within 1,000 feet of a church, which is problematic given that many churches, including OurCalling, see just such charity as part of their core function.

Last week, the Dallas City Council changed the rule that made Walker an outlaw. Churches and nonprofits are now allowed to open their doors to homeless people during inclement weather. That was the right decision. The rule, Chapter 51A of the Dallas Development Code, has been a point of contention among people who care for our city’s most vulnerable.

In 2018, Walker was issued a citation for his organization’s nefarious charity. He framed it and keeps it in his office on the south end of downtown. And he keeps on serving the poor.

“When I read my Bible, Jesus summarizes it best when he said to love God and love your neighbors,” Walker told our reporter last week. “When your elected officials make these sorts of rules, it makes it really challenging to know where our responsibility lies.”

We’ll be more direct: When a policy puts good people like Walker in the position of having to disobey the law to faithfully fulfill their role in society, it’s probably a bad policy. 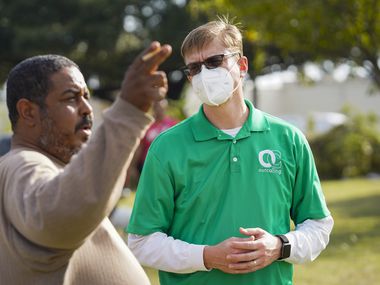 Dallas will allow churches, nonprofits to care for homeless during bad weather — except downtown

The city’s new rules would allow organizations to provide temporary shelter unless they’re downtown where resources exist.
By Nic Garcia

As the City Council considered removing 51A, Walker thought his life of crime was behind him. But at the last minute, the council decided to exclude downtown charities. Churches in the central business district may not apply for exemptions to the ban. Walker’s criminal enterprise was foiled again.

We want to be fair to the council. There is some logic to their deliberations. Since the opening of The Bridge, a homeless shelter operated by the city in 2008, city leaders have attempted to align homeless services to go beyond charity toward empowerment. Homeless people need more than a roof over their heads (but not less). They need services that can help them build a more stable future. It does no one any good for needy people to ride the circuit of charities, getting handouts from various churches and nonprofits, without ever getting a hand up. So it makes sense to offer some leadership to that end.

But on Christmas Eve? When the weather is cold? Or freezing rain pelts the streets? That is no time to close doors to our neighbors in need. Wayne Walker understands that. And as the holiday season approaches, he intends to continue his civil disobedience to help his fellow man.

And that makes him the best kind of outlaw.