Our recommendation for Plano mayor

Lily Bao faces off against John Muns and Lydia Ortega.

On May 1, Plano voters will have a chance to choose between two quality mayoral candidates with deep knowledge of the city and experience serving their neighbors. Our endorsement goes to Lily Bao.

Bao, 50, is the only candidate in the race currently on the Plano City Council. In our candidate forum, she demonstrated deep knowledge of city government, citing financial statistics on the fly and recounting the history of certain council deliberations.

A Realtor, Bao speaks intelligently about one of Plano’s most important issues: housing. Housing trends are changing in light of the pandemic, as are opportunities for development and redevelopment across the city. Once a staunch critic of multifamily housing, she seems to have softened slightly on that score. She pointed to the recently approved development on the east side of the Collin Creek Mall property as “a great project.” But she was also proud of having negotiated for fewer apartments in that development.

“If we don’t limit some of these projects then we won’t have room to approve good projects like Collin Creek Mall,” Bao said. 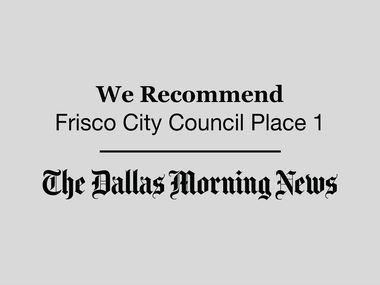 Bao can also point to an important ethics ordinance she championed last year. That rule, which passed by a 4-3 vote in December, requires council members to recuse themselves from votes involving a person or entity that contributed more than $1,000 to their political campaigns.

Bao’s primary challenge comes from Plano investor John Muns, 61. Muns has lived in Plano for 50 years and served in multiple civic leadership positions, including 16 years on the board of Plano ISD, three of those as board president. He has also served on Plano’s planning and zoning commission. Muns is well-connected, enjoying endorsements from five former mayors. He has also raised more money than anyone in this race, according to surveys and filing documents. Muns emphasizes the need for infrastructure upgrades, particularly surface streets, most of which are more than 30 years old in Plano. His deep connection to PISD leads him to oppose school choice programs that have improved education in other places.

Lydia Ortega, 62, is also in this race. Ortega’s career is in academics and she has scant experience in local government. A recent transplant from California, she has lived in Plano for two years.

Muns and Bao are both quality candidates, but Bao gets our nod. She is competent, ethical and experienced. She’s also an immigrant with a compelling personal story of hard work and pursuit of the American dream.