The Bears, who host Iowa State Tuesday, have not played a game since Feb. 2.

To echo the words of Nelson Cruz from a decade ago, “It’s time.”

It’s time for the Baylor Bears to reach their first Final Four in 71 years. More to the point, it’s time for Baylor to play a basketball game.

Every team has fought through its own hardships in the first college basketball season played during a worldwide pandemic. In the Bears’ case, I suppose they will be the first team to try to win a championship after taking three weeks off in February.

The Bears, who host Iowa State on Tuesday, have not played a game since Feb. 2. They have had seven conference games, not to mention a big December contest against Gonzaga, postponed this season. In spite of a messy situation, the undefeated Bears remain No. 2 in the land — right behind unbeaten Gonzaga, the way it has basically been all season — and seem fully capable of getting coach Scott Drew to his first Final Four.

Drew’s teams made a pair of Elite Eights in 2010 and 2012 and were ranked No. 1 in five straight AP polls in January and February last season. A late-season slide had them ranked fifth in the country and set to be a sure No. 2 seed for the NCAA Tournament that never happened.

It’s interesting that the entire tournament will be played in and around Indianapolis next month, and the Bears’ biggest win to date came there in the Jimmy V Classic, an 82-69 victory over Illinois. The Fighting Illini currently rank No. 5 in the country.

Illinois couldn’t handle Baylor’s outside shooting. No one else has, either.

This week — finally — the Bears get back to business, with the Cyclones serving as kind of a warmup act (rare to see this team winless in Big 12 play) before West Virginia visits Thursday night and the Bears go to Kansas on Saturday. They could add more games from their long postponed list next week, since the Big 12 tournament in Kansas City runs from March 10-13.

But getting through this week, after the weirdly long layoff in which the team was mostly unable to practice, is the first step. Both Baylor games with Bob Huggins’ Mountaineers have been postponed this year, so this is the Bears’ first look at West Virginia since a 76-64 road loss at the end of last season.

While rust is likely to be evident at times, it won’t be a surprise if the 17-0 Bears are 20-0 and ready for more after the Kansas game. West Virginia has size that can trouble Baylor, and the Jayhawks have gotten much better after stalling out early this year. But Kansas coach Bill Self, whose team lost to both Gonzaga and Baylor this season, shuddered to think there were more teams out there like those two.

“I would be shocked if there’s a third that fits into that category,” he said.

Gonzaga gets up and down the floor like nobody else to lead the country in scoring. Baylor does its damage from the 3-point line. Five Bears rank in the top 10 in Big 12 3-point percentage, and their team figure of 43.9% from distance is well ahead of No. 2 Weber State’s 40.9.

You feel like college basketball fans deserve a Baylor-Gonzaga matchup in Indy as much as the Bears and Zags do, although Sunday’s Michigan-Ohio State game — a five-point win for the Wolverines in Columbus, Ohio— reminded us that, despite what Self was hoping, there are some really good teams knocking on the door of the unbeatens.

In a recent March Madness Bracket preview show on CBS, the Big 12 and Texas flavor was strong. Baylor was a No. 1 seed, naturally, while Oklahoma and West Virginia were No. 3 seeds and Texas and Texas Tech were No. 4s. Even a Big 12 defector (Missouri) and an old Southwest Conference foe (Houston) grabbed spots on the first four rows.

There’s nothing usual about this. This has been a basketball conference for some time. Oklahoma reached the Final Four with Buddy Hield in 2016, Self made one of his three Final Four trips in 2018 and — strange as this seems now — Texas Tech played in the last NCAA title game. I say strange not because Chris Beard’s teams haven’t continued to perform but because that overtime loss to Virginia feels like ages ago.

This feels like Baylor’s turn. Jared Butler, Davion Mitchell and MaCio Teague take turns leading the way in the box score, and 43.9% from 3 is just a mountain for teams to overcome. Just as Gonzaga is always going to wear down opponents with its pace, the Bears are going to have a hot streak from 3-point range to grab a lead or pull away at some point.

At least that was the case before a forced hiatus put the best shooters in the land on the shelf for three weeks. Time to dust them off and see what they’ve got.

Russell Wilson to the Cowboys? Why a potential trade is mostly silly, problematic

The Rangers can’t miss in this year’s MLB draft. Luckily, many of the nation’s top prospects are passing through Arlington.

Roope Hintz out again for Stars as Jake Oettinger gets start vs. Florida 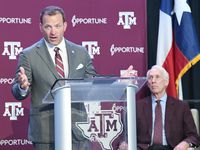