See the full AP top 25 and coaches poll after Week 7 of the college football season.

The Caleb Williams era is underway in Oklahoma and so far the freshman quarterback is leading the Sooners in the right direction.

A week after replacing then starter Spencer Rattler and leading Oklahoma to an incredible comeback win against Texas, Williams orchestrated a high-powered Sooners offense to a 52-31 win over TCU on Saturday.

The win, combined with No. 3 Iowa’s upset loss to Purdue, propelled Oklahoma to No. 2 in Sunday’s AP Top 25 poll, the highest the Sooners have been ranked all season long.

Dave Aranda’s Baylor Bears are also trending in the right direction. Baylor’s coming off its second ranked win of the season, dismantling future Big 12 opponent BYU 38-24 on Saturday. The win elevates Baylor (6-1) to No. 20 in the rankings.

Meanwhile, things haven’t been going as well for Texas, dropped out of the top 25. The Longhorns followed up their collapse against the Sooners with another against Oklahoma State, falling 32-24 on Saturday after holding an early lead. Oklahoma State rose to No. 8 in the rankings.

After last week’s upset win over then No. 1 Alabama, Texas A&M continued its climb up the rankings, rising to No. 17 after a 35-14 win over Missouri.

UTSA (7-0) joined the rankings for the first time this season at No. 24 after the Roadrunners’ 45-0 win over Rice.

SMU moved to No. 21 during its bye week. Texas Tech remains unranked after its 41-14 win over Kansas.

5 takeaways from Oklahoma’s win over TCU: Caleb Williams shows how electric the OU offense can be 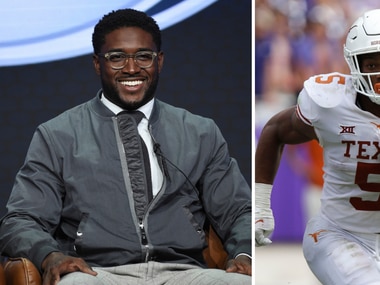 ‘I see so much of myself in Bijan’: Reggie Bush speaks on similarities with Texas’ Robinson