‘Everyone is in the same boat’: Cowboys guard Zack Martin making best of at-home offseason program

Martin, like the rest of us, has no idea if or when football will return to the field.

Anthony Fauci can’t say for sure.

Any epidemiologist worth his or her susceptibility and exposure models can’t provide a definitive answer. Yet that doesn’t keep the media from posing the question to whatever athlete crosses their path.

Are you, Zack Martin, confident the Cowboys will play football in the fall?

“I have no idea,’’ the Pro Bowl guard responded in a conference call with local reporters earlier this week. “We know as much as you guys [media] know right now.’’

Why should Martin know what lies ahead on the disease control front? How could anyone? All he can do is take part in the team’s virtual meetings, stay in the best shape possible while working out on his own and prepare for the training camp that may or may not start in late July.

When you get right down to it, Martin has no more insight into how COVID-19 will impact the 2020 season than he does when the Cowboys and quarterback Dak Prescott will finally reach an agreement on that long-term contract.

“That’s between the player and the Jones family,’’ Martin said. “Obviously, as one of his offensive linemen, I look forward to when that gets done. But that’s between them.

“I’ve been through it. I know it’s a tough process. Hopefully, whenever they get that done we’ll be back together and can get rolling.’’

The players aren’t together at The Star like they normally are this time of year, but they are rolling virtually. Players break into position meetings for a couple of hours a day remotely.

The new coaching staff goes over the terminology it will use. Parts of the offense and defense are installed. It’s no different than taking an on-line class in college.

Joe Philbin is the team’s assistant head coach and offensive line coach. Martin calls him an excellent teacher, saying he gets everyone dialed in before moving on to the next part of the meeting.

“It’s been very positive,’’ Martin said. “The biggest thing, as far as terminology, is to get on the same page.

“At the end of the day football is football. It’s just different ways of calling stuff. Once we get how to call it down, the plays are very similar.’’

Martin said the loss of Pro Bowl center Travis Frederick to retirement is big, but he’s looking forward to working with rookie Tyler Biadasz once everyone is together.

These virtual sessions aren’t ideal, especially when you consider the Cowboys have a new head coach and way of doing things for the first time in nine years. But as Martin notes when it comes to this offseason, “everyone is in the same boat.’’

The same goes for training.

Players have normally been working out side-by-side for weeks at this stage of the offseason. It’s a time to push each other in the weight room and on the field running sprints or other conditioning drills.

Now, that work is done alone after getting a workout plan from the team’s strength and conditioning staff.

“I’ve tried to keep my routine and program the same as if I was going to the facility,’’ Martin said. “I’ve got a gym in my house to work out, so I can get a lot of stuff done.’’

Martin has had to upgrade his gym since he hasn’t been allowed to go to The Star. There’s a new rack of barbells and some conditioning equipment that wasn’t there before. He doesn’t consider himself behind physically.

“Most of us are self-motivated and are able and disciplined enough to do what we need,’’ Martin said. “It’s tough. When everyone is working together, it makes it more enjoyable.

“But you have to realize everyone is going through this. At any time, this can change and we’ll be back up there. You have to stay prepared for when they make that call.’’

The Jones family and a few other employees returned to The Star this week. A larger wave is scheduled to return on Tuesday after the holiday weekend. The coaches and players won’t be part of that group.

Does Martin have any idea when that will happen?

That doesn’t mean Martin won’t have to answer the question again -- and again, and again -- before he and his teammates are back together.

Catch David Moore on The Ticket (KTCK-AM 1310 and 96.7 FM) periodically throughout the offseason. 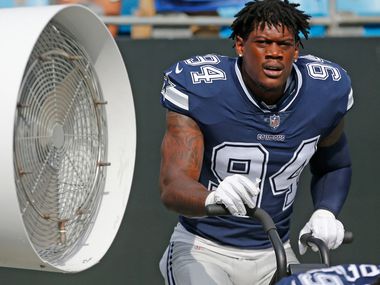 A Cowboys trade for Jamal Adams, the unnecessarily revisited thought of the offseason

In a sign of solidarity, Mark Cuban, Mavericks join Dallas community in honoring the memory of George Floyd

Film room: 3 Cowboys in danger of losing their starting jobs, including an inconsistent nose tackle