A rash of Sunday injuries prompted a rush of Tuesday transactions for the Cowboys.

By the end, they placed three players on injured reserve, plucked two players from other teams' practice squads and shook up their own 17-man unit while signing defensive back Brandon Carr to their 53-man roster.

Neither Bernard nor Eric Smith should feel too slighted. Like seemingly all roster moves the Cowboys have made of late, some strategy seems to be in play.

Dallas seized a chance to add talent to its building. If it promoted Bernard and Eric Smith, the team would’ve been in the market Tuesday for a couple free agents for the practice squad. Instead of those lower-quality free agents, it acquired two players who were highly regarded enough in Chicago and Arizona to make the practice squad and not be free agents.

The Cowboys' depth is better for the moves.

The only potential downside is an NFL team might sign Bernard or Eric Smith off the Cowboys' practice squad, exactly as how the Cowboys did with Rashad Smith and Light. There is a counter to that, though.

All teams can protect four players on their practice squad each week, making them ineligible to be signed by another club. Dallas did that in Week 2 with Bernard, Eric Smith, tight end Cole Hikutini and defensive tackle Ron’Dell Carter. This is the second straight week Bernard and Carter were designated.

With the third open roster spot, Dallas promoted Carr from the practice squad. He was in uniform last Sunday against the Los Angeles Rams but never took the field. The veteran with 192 career starts joined the Cowboys only 10 days ago after training camp, so his role will increase over the coming weeks.

There was no move at tight end despite Jarwin’s injury.

Undrafted rookie Sean McKeon is one of three healthy tight ends who remain on the roster. He’s expected to make his NFL debut Sunday against Atlanta. 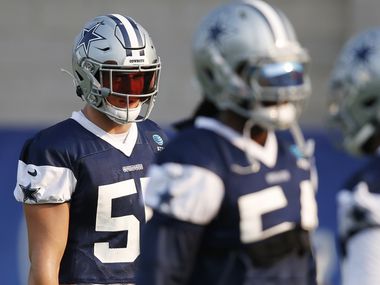