Win the individual duel with Wilson and Prescott and the Cowboys stand to win much more down the road.

FRISCO — Dak Prescott is only a few days removed from becoming the first quarterback in NFL history to throw for more than 400 yards and rush for three touchdowns in a game.

Every single yard was vital as Prescott led a comeback that saw the Cowboys overcome a 15-point deficit in the final eight minutes to win. The question now for the reigning NFC Offense Player of the Week is simple.

What’s next? How do you top that performance?

Go out and best Russell Wilson in Seattle. That’s all.

Life as the quarterback of a high-profile team isn’t fair. It generates even more scrutiny when you’ve spent roughly 19 months trying to strike an accord with the franchise on a long-term deal and can’t.

New England coach Bill Belichick declared going into the Patriots game with Seattle that Wilson was underrated and he didn’t see anyone playing at a higher level. Belichick had no reason to retract his statement after watching the Seahawks quarterback complete 75 percent of his passes with five touchdowns in a 35-30 victory.

No one expects Prescott to go out and win every game. No one expects him to duplicate the miraculous performance that fueled the comeback against the Falcons. He doesn’t have to win every individual battle with another top quarterback.

That’s how you cement your individual status among the league’s elite. That’s how you ensure the long-term contract that’s eluded your bank account to this point.

Win the individual duel with Wilson, and Prescott and this team stand to win much more down the road.

“That’s out of my mind,” Prescott said. "I’ve got all of the faith in my defense going out there and doing their job.

“But for me, it’s about staying focused in on what the Seattle Seahawks defense is going to give us, how we execute. That’s the premier focus and the only focus within a game plan, no matter who the quarterback is.”

Prescott is off to a strong start. He’s third in the league with 716 passing yards. He’s completed 68.6% of his passes, hasn’t thrown an interception and owns a quarterback rating of 101.7.

“He’s doing everything well,” Seattle coach Pete Carroll said. "His numbers are great. His movement is good. The ability to use him a little bit in the running game.

“His accuracy is on it. Athleticism. His command of the game. It looks like the game is easy to him.”

Wilson hasn’t thrown for as many yards. But he’s completed 82.5% of his passes. He’s thrown nine touchdown passes with just one interception and boasts a quarterback rating of 140.

Cowboys coach Mike McCarthy followed Wilson’s career at the University of Wisconsin before he joined the Seahawks and led the franchise to a Super Bowl title. He has the utmost respect for the quarterback. McCarthy said Wilson can make every throw and marvels that his long ball accuracy is off the charts, an assertion supported by the fact that Wilson averages 9.7 yards an attempt this season.

“This is the best I’ve seen him play,” McCarthy said. "Just the big plays he’s put on film the first two weeks of the season are exciting. It’s going to be a big challenge for us.

“We’re going to have to win the second reaction. We’ve got to win the play above 2.3 seconds. That’s a big emphasis for us.”

Prescott has led 15 game-winning drives since entering the NFL for the 2016 season.

Wilson has 14 in that span.

The Seattle quarterback leads the league since the start of the ’16 season by producing 22 touchdowns in the fourth quarter or overtime of a seven-point game.

“Their style is much different,” Carroll said. "But the fact both of them create problems for you and can get outside of the pocket and run is a similarity there.

"They just look so much different as players. But the fact he [Prescott] moves the club and puts up a bunch of yards, is completing 70% of his passes and all of that kind of stuff, and he’s been effective as a runner, that’s all the same.''

Wilson has led the Seahawks to the Super Bowl twice and come away with the trophy once.

Prescott hasn’t taken the Cowboys past the second round.

Wilson signed an extension last season that gave him $107 million in guaranteed money.

Prescott signed the exclusive franchise tag for $31.4 million earlier this year when the two sides failed to reach a long-term agreement.

Sunday’s game shouldn’t be reduced strictly to an individual duel. A Cowboys win would be big this early in McCarthy’s tenure and build on an improbable victory over Atlanta.

“This is a heck of a matchup for us,” McCarthy said.

It’s a heck of a matchup between Prescott and Wilson.

May the best quarterback win.

Here’s what the Cowboys' Dak Prescott and the Seahawks' Russell Wilson have done in two clutch categories since Prescott entered the league. 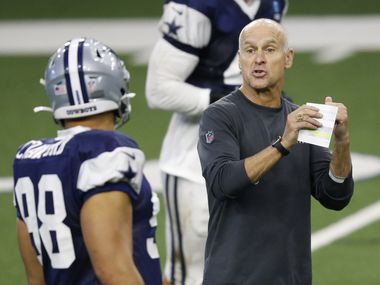 Why the Stars’ power play is sizzling early, and how Ty Dellandrea earned Dallas’ trust