A source says the Cowboys will ease Vander Esch into the action.

Update, 7 p.m., Oct. 17: A key player is poised to return to a struggling Cowboys defense.

Leighton Vander Esch is expected to play Monday night against Arizona. It would be the linebacker’s first action since fracturing his collarbone in the first quarter of the season opener against the Los Angeles Rams.

Mike McCarthy said he’s “definitely encouraged” about the LBs chances of playing, adding, “All the arrows are pointing up right now.”

The Cowboys' game with Washington on Oct. 25 was the original target date for Vander Esch’s return. But it’s become clear in recent days that he’s slightly ahead of schedule.

Vander Esch practiced in team drills Thursday for the first time since the injury, and McCarthy said it was “like he didn’t miss a beat.” He followed that up with another strong practice in pads Friday and felt good going into the weekend.

The return of the third-year pro is a desperately needed boost for a defense that has allowed an average of 36 points. Vander Esch is expected to be eased back into the rotation, meaning that Joe Thomas, who has stepped into the starting lineup during Vander Esch’s absence, should still see plenty of snaps.

After an outstanding rookie season, the former first-round pick has seen his rise slowed by injuries. Vander Esch missed the final six games of last season when it was discovered he suffered from cervical spinal stenosis, a narrowing of the spinal canal, and he underwent surgery for a bulging disc.

All told, the linebacker has missed 11 of the Cowboys' last 14 games.

FRISCO — Leighton Vander Esch went through his second consecutive practice and there’s a chance he could return against Arizona.

The linebacker fractured his collarbone in the first quarter of the team’s opener against the Los Angeles Rams.

It was originally believed he could return for the team’s game against Washington on Oct. 25.

But by all accounts Vander Esch is ahead of schedule. After his practice on Thursday, coach Mike McCarthy said, "Leighton looked like he didn’t miss a beat in there.''

He followed that up with another strong practice in pads on Friday.

"He looks like the Wolf Hunter himself,'' linebacker Jaylon Smith said. "I’m happy to have him back out here working, just grinding it away. Just excited for him.

"I’m just happy that he’s out here doing what he loves. We’ll see if they let him go.''

Briefly: David Irving, the defensive tackle who last played for the Cowboys in October 2018, has been conditionally reinstated. He’s a free agent. Irving decided to come out of retirement in the spring when the league softened its stance toward marijuana use in the new collective bargaining agreement. The Cowboys expressed no interest in signing Irving at that time and it’s doubtful their position has changed. 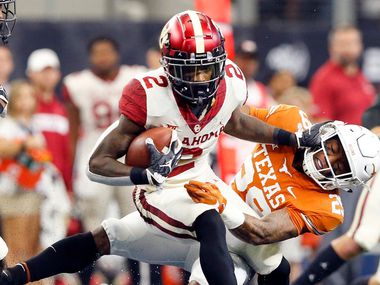 Dallas Cowboys linebacker Leighton Vander Esch was the team's first round pick in the 2018 NFL Draft.